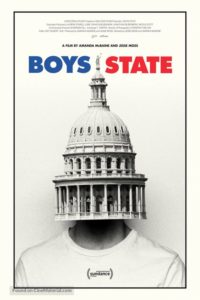 The American Film Institute’s annual Documentary Film Festival highlights the best non-fiction films of the of the year, and they are not going to let a COVID-19 get in the way. Instead of showing the films at their theater in Silver Spring, Maryland and venues in Washington, D.C. they are moving the festival online. The festival will run June 17–21 and films will be available to view on DOCS.AFI.com.

They’re describing it as an online film festival — “where the best seat is in your house, ” with AT&T returning as Presenting Sponsor for the seventh consecutive year. The festival will open with the Apple and A24 release “Boys State,” which follows a group of teenage boys at an annual civics program hosted by the American Legion in Austin, Texas. Attendees create a mock government and campaign for leadership and party platforms. Exploring politics through a coming-of-age lens, the result reveals American democracy and political division at its most hopeful and terrifying moments. The film, a Jury Prize winner at Sundance, was directed by Jesse Moss and Amanda McBaine. The Opening Night screening of “Boys State” will be held on June 17, followed by a Q&A.

“AFI is committed to the documentary art form in the best of times and in the most challenging of times,” said Michael Lumpkin, Director of AFI Festivals. “Now more than ever, we are dedicated to supporting extraordinary films because the world needs stories that educate, inspire hope and remind us of humanity’s strength. AFI DOCS is here to help.”

The AFI DOCS 2020 program will be presented in the following sections: Special Presentations, Features, Cinema’s Legacy and Shorts, as well as a virtual AFI DOCS Forum. Apple TV+, A24, Audience Network, HBO, National Geographic, PBS and The Atlantic will all have films in the festival. The full slate will be released on June 10.

Special Presentations will include the festival’s unique slate of special evening events, available to a limited audience for one-time viewing and featuring conversations and Q&A’s with the films’ directors and main subjects. Featuring exclusive films, many of which have not yet been publicly screened, the festival’s Feature Film program will include over two dozen films from the US and around the world.

The festival will also include a Cinema’s Legacy program, featuring historically notable non-fiction films that have made an impact on the documentary art form. In one of the most challenging general election years in modern times, this year’s program will be dedicated to films documenting landmark moments in our nation’s political history.

AFI DOCS Shorts Program will feature more than 20 documentary shorts screening in four curated programs. Each shorts program will be available to screen from June 18 through June 21.