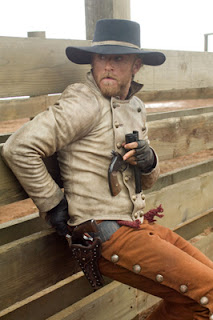 Ben Foster stars with Russell Crowe and Christian Bale in “3:10 to Yuma,” one of this fall’s two big westerns. This is a remake of an earlier film by the same name, starring Glenn Ford and Van Heflin, a tense thriller about a rancher who must deliver a captured outlaw to the train station, so he can be taken to trial. Both movies are based on a story by Elmore Leonard, better known as the writer behind stories of modern-day crooks and tough guys. This new version is directed by James Mangold of “Walk the Line” and “Girl, Interrupted.”

Ben Foster took time to talk with me by phone between interviews when he was in Washington to promote the film. He was very engaging and very forthcoming about his tactics in approaching this role.

Jim really re-created and modernized the film and really delved into the character development. Fans of the original film will be startled. I decided not to watch the original film. I related to being in an accident where it seems like everything slows down. My research was going through the archival photographs of outlaws at the time. We concluded they were the rock stars of their day. They were like pirates or rock and roll stars, living outside of the law, where murder becomes your show, performance. So I watched glam rock footage, David Bowie and INXS. These outlaws were also indiginous to the environment and its elements. They were predators. That idea seemed to resonate the most, so we looked at mountain cats, how they move and approach their prey. We also thought of matadors because there is a certain elegance to the character. I play the second in command, so finding a certain kind of deviant loyalty was also important.

Foster started acting professionally when he was very young, so I asked him about his influences.

and really shaped me with his approach to work. I was hoping to be told what to do and his direction was by asking questions, making it your own. Nick Cassavetes (Alpha Dog

) works in that same way and so does Jim Mangold.

I’m heading to Belfast to shoot a film called “50 Dead Men. I want to keep doing what I am doing. I’m fortunate to stay busy and not feel that I am repeating myself.
I’ve never avoided a genre or pursued one. It’s always the material and who the other players are. What’s important is I’ve never taken a job because I know how to do it. I look for a sense of recognition. Ideally in conspiracy with the director you create a fouidation that lets the character come in, making room for that person to come through, so you’re experiencing through them rather than through you. I believe you do the research and preparation so you can experience what is going on for the first time.

He admires his co-star:

Russell Crowe was incredibly supportive. He went out of his way to make sure that I felt good on my horse. I had never ridden a horse before and that’s not something you can really fake. He is really misrepresented in the press. He is a remarkable actor. If you’re hardworking and you mean it, you’ve got him on your side.

And the most important thing to know about this film:

There’s a stigma with westerns that makes people think there’s no dialogue and it’s all people scowling at each other. This is more of a character-driven action film great acting, great ride, not a dated western, it really moves.