Black Panther: Behind the Scenes 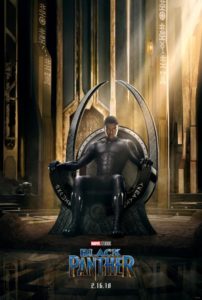 I was lucky enough to be able to interview “Black Panther” co-writer/director Ryan Coogler for rogerebert.com.

“The question for me is what does it mean to be African? It’s a question I’ve been asking myself since I first knew I was black, since my parents sat me down and said, ‘You’re black and that’s what this means. You’ve got to navigate the world in a certain way.’ That’s the conversation every person has had to have because of the way the world works. If you don’t have that understanding you could be in a situation that costs you your life,” as Coogler’s first film, the fact-based “Fruitvale Station,” showed. “Nobody who was telling me what being African means had ever been there. My parents had never been, my grandmother had never been.” So it was essential for him to spend time in Africa, researching the cultures that Wakanda would represent.

And as the mother of a costume designer, I was especially excited to speak to Ruth Carter, whose costumes play such an essential role in the film. She talked about the African inspirations for the traditional tribal attire of the Wakandans, and the way African patterns are even reflected in the iconic superhero suit.

Actual African fabric as we know it is Dutch and Dutch-inspired and brought to Africa. Africa liked it and adopted it so all of their African fabrics come from Holland or from China. Wakanda was never colonized, so I didn’t want to use them. Every time I started to use the African fabrics I felt like it was not this movie so I created my own fabrics, based on the sacred geometry of African art. Usually it’s a checkerboard or it’s pyramid shapes or it’s striations of horizontal and vertical strikings so I use that and we created prints. Lupita’s green dress in the casino is one print that we created based on the Nigerian kente cloth. We just extracted the line work and we printed the fabric the same way we printed T’Challa’s superhero suit.

Once I get the illustration of the super suit I can’t change it; I can’t give him a Shaft coat, all of a sudden. I have to stay within those confines because they have already been working with merchandisers and all kinds of other people. The one thing that I did do which was my contribution was the Okavango pattern, a triangle shape.

That fabric is completely made up. The triangle is definitely a big part of African artistry. It’s a mystery within the African culture what that triangle shape actually means and everybody has their own theory. So the panther suit was printed with that triangle shape all over it so that when you’re looking at it, it’s this superhero suit that has this Wakandan language traveling through it; veining throughout it, and you also see an Okavango pattern and which makes it feel like he’s in the place of Wakanda, he’s in Africa and he’s an African king and gives it texture.

Vanity Fair posted a scene analysis with Coogler explaining what was going on in one of the film’s striking action sequences.