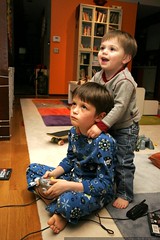 Parents of children with attention deficit issues like distractibility often note that their children can become utterly absorbed in a computer game even though they have trouble maintaining focus in other environments.  According to the Child Mind Institute’s Caroline Miller:

First, “there is no evidence whatsoever that TV or video games cause ADHD,” explains Dr. Natalie Weder, a child and adolescent psychiatrist at the Child Mind Institute who has treated many kids with the disorder.

That said, super-fast-paced TV shows and video games do have a special appeal for kids who have ADHD. “If you think about SpongeBob, or a video game, there’s never a second when there’s nothing happening on the screen,” Dr. Weder notes. “If you’re playing a video game, you have to immediately respond; otherwise you lose. You don’t have time to think. So kids with ADHD are very drawn to that, because it makes them have to pay attention. There are no gaps for them to start thinking about something else.”

Video games effectively hold the attention of kids who find it very challenging to concentrate in the rest of their lives. “In fact, a child’s ability to stay focused on a screen, though not anywhere else, is actually characteristic of attention deficit hyperactivity disorder,” writes Dr. Perri Klass, a pediatrician, in the New York Times. “There are complex behavioral and neurological connections linking screens and attention, and many experts believe that these children do spend more time playing video games and watching television than their peers.”

But what’s happening when kids are absorbed in video games isn’t the same thing as the kind of paying attention that other tasks require.

“Continuous activity doesn’t mean sustained attention,” points out Dr. Ron Steingard, a child and adolescent psychiatrist at the Child Mind Institute. “It looks like sustained attention, but the truth is that the task is changing so rapidly, short bursts of attention are all that’s involved. These games are constantly shifting focus, and there is instant gratification and reward.”

It makes sense the kids with ADHD would find games more compelling than the average person. “It’s the perfect fit of the medium with the pathology,” notes Dr. Steingard. “Nothing else in life moves that quickly and rewards that spontaneously. For a person who’s into delayed gratification and a slower pace, they don’t have as much appeal.”

The makers of some new video games are so confident that their products actually help kids to learn how to focus that they are seeking approval from the Food and Drug Administration to market their games as a treatment for ADD:

If proven effective, physician-prescribed video games could treat neurological illnesses without exposing patients to the side effects seen with today’s medications such as Ritalin.

The fast pace and continual positive reinforcement can be especially appealing to kids who are not comfortable in school and social environments.  Miller notes that while the American Academy of Pediatrics recommends an hour per day of total media screen time (including computers and television/DVDs) for elementary school children, and two hours for kids in secondary school, the average is closer to six hours.  Parents should make sure that kids spend at least as much time exercising and playing with other children as they do interacting with media.