Emile Hirsch Goes Into the Wild 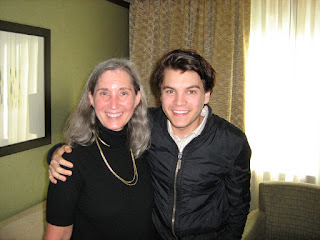 Emile Hirsch gives a magnificent performance in one of the year’s best films, Into the Wild. I met with him in Georgetown to ask him about making the film.
What does Sean Penn as an actor bring to directing?
He has that whole wealth of experience since he’s done it on the actor’s side. So you trust him so much. Everything he asked me to do, certain things I was hesitant to do, he did first. He ate squirrel. He went first on the Colorado River. He let me know I could do it. Sean was an incredible director. He let me learn for myself, He helps you bring out the best in yourself and there’s no greater gift.
All of the movies Penn has written and directed are in some way about lost children. Why do you think that is?
He is a man of high intellect but also a very keen instinct. A lot of his choices are on an instinctual level in a very pure way. One of the things I admire about him so much is the kind of strong-willed instinct that he has and the confidence to trust that instinct and move forward. Where so many people are in the back rubbing sweaty palms, he is doing it. He wanted to do this movie because he always had a really strong wanderlust, as do I. It was infectuous, the idea that you want to go out and live your life all the way and have more meanng, live it while you have it.
You play a real-life character who died of starvation in Alaska. Did he have poor judgment? Was he self-destructive? Where would he have gone next?
He made a couple of really crucial errors, not bringing things with him like a map. But he purposefully did not bring them because he wanted to shave he margin of error. He shaved it a little too much. He had amazing wanderlust and also had a lot of personal problems.
Did he learn from the people he met or were they just way-stations on his journey to sever all ties?
He was very determined. The people on the road started to open his eyes, but it took the total solitude for him to find himself and what the meaning of his life could possibly be.
It’s quite a contrast to go from this film to your next film, “Speed Racer.” How do you prepare for such different genres?
The directors of “Speed Racer,” the Wachowski brothers, the guys who did The Matrix, have a particular sensibility about performances they expect. It was like being in a sauna for eight months and jumping into an ice bath without a break — with the lid locked!
Were there elements of the real-life story that were especially meaningful to you in portraying Chris McAndless?
The abandoned bus he lived in, which he called “the magic bus.” It was like a waystation, always symbolzing the journey, Where he learns about himself. It symbolizes the question, “Where is he going?” And I read the books he was reading, Walden by Thoreau, Emerson, Dr. Zhivago by Pasternak, Jack London’s Call of the Wild. What Chris did was very similar to what Thoreau did.