Interview: Dana Canedy about “A Journal for Jordan” 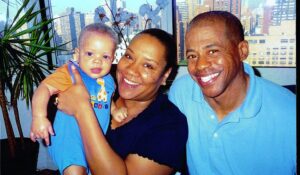 Dana Canedy’s book, A Journal for Jordan, is the story of her romance with First Sgt. Charles Monroe King, with excerpts from the journal he wrote for the son he would meet just once before he was killed in Iraq. It’s now a movie starring Michael B. Jordan and Chanté Adams, directed by Denzel Washington. I interviewed Ms. Canedy for the Alliance of Women Film Journalists.

He was writing at a time in his life where he was looking forward to this new life that was coming into the world but also watching soldiers die really focused him in terms of writing what was important and stripping away anything that wasn’t. That’s what makes the journal so powerful. Also, I don’t think he realized he was writing themes throughout the journal that emerged. I don’t think that was on purpose. But when I read it, it very clear what the themes were. They were his love of God, his absolute pride, and dedication in military service. His utter profound respect for women, and the fact that he expected Jordan to respect women. And his love for me. Those are the four themes that came through over and over in in the journal.