Producer Gareth Neame explains how he came up with the original idea for the “Downton Abbey” series, what went into adapting it for a feature film, why Americans and British fans see it differently, and why it is that fans respond to it so strongly, and confesses, at last, which is his favorite character.

What does it take to be a good producer?

I suppose you have to be quite tenacious, ideally you’re pretty passionate about what you do. I think you have to have attention to detail and you have to make the right judgment. Of course in every creative endeavor let’s say there are 100 key decisions that have to be made. The more of those 100 decisions you get right, the more likely it is you’re going to have a success. You can get a bunch of them wrong — you could put the wrong hair dresser on the show and you can have one of the writer’s not be quite right and the location you chose wasn’t the best place. Or you can get a number of these things right. Every show does but the more of them you get right the bigger difference it makes. So your judgment calls are quite important. And you have to find things you’re passionate about. It is really hard to produce something that you’re not enthusiastic about.

Running a production business is difficult because you can’t really love every show you make equally. Like Julian Fellowes would say, “Characters don’t love all their children equally; they have favorites.” Unless you’re going to make one thing at a time, it’s really hard to love everything. As a busy production company we make multiple shows but somehow you need to love all of those things as much as you can and you need to be tenacious and patient.

I suppose that’s what happened with the Downton movie. It’s taken me three years from the end of the television show to get it to the screen and that was an awful lot of persuading. We had to have 20 actors all be available at the same time and to make deals with us. We could probably have made it if a few of them didn’t show up a for the movie but we really wanted everyone there. We had to make the film at an affordable price so they had to make reasonable deals with us and fortunately all of them wanted to do it but they were waiting to see was it really going to happen. “If I commit are the others going to commit as well?” There was a little bit of everyone having to hold hands and go in together.

Is it true that the series was originally your idea?

I’m a British producer based in London so I like to find stories that are expressly British subjects. The great thing about the English country house genre, a genre I really like, is it’s pretty unique and it has all these wonderful iterations, comedy, romance, mystery, drama. There are so many different iterations of that genre giving us a slightly fictional world that never quite existed.

But certainly visually it exists and as you can see from Downton and other shows, there are lavish, beautiful historic properties. There was a very clear system of deference and protocol and everyone having their place which lends itself very well to drama. So I think it’s a good genre and it’s unique to Britain and so I’ve always thought it was a great environment. The idea was in my mind for several years. About 12 years ago now probably I was going through channels on the TV and I alighted upon an excerpt of Upstairs Downstairs and I knew what it was straightaway. I thought, “This is really interesting. I’m 40 and I’m too young ever to have watched that show, which means there are two generations who never saw it.” So I thought the time was right to invent this.

There’s a house I went to once near where my parents lived that had very well preserved servants’ quarters and kept exactly as it was in the Edwardian time and then it had all these gadgets in the kitchen like hundred-year-old toasters and ways that you kept things fresh. They actually had all kinds of gadgets and technology, just things that we have forgotten about now. That ended up in the show with Mrs. Patmore and the fridge and her aversion to technology because it was going to put her out of a job.

Roundabout the same time I got to know Fellowes and I was so impressed with his film Gosford Park and then I read his novel Snobs and I thought this man really has an outstanding of British culture and history and the way that we all speak. I can’t think of anyone really writing on screen who captures that strange way that we Brits have with speaking when we never really say what we mean, we say the opposite of what we mean. He captures that voice so well. I thought, “There’s something incredibly salable about Julian Fellowes and what he’s doing and he’s unique,” so I then said to him “Look, I’ve got this idea for this episodic show and in a lot of ways it’s returning to what you did with Gosford Park; it’s going back to that world but doing it as an episodic weekly show.” He’d never written/created a drama series so I didn’t know for certain if he was going to be able to do that to the degree that he did. 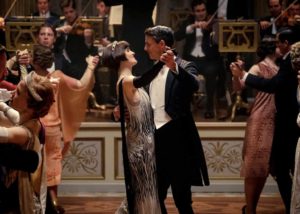 Do Americans and British audiences see it differently?

I just think there is an American fascination with the monarchy and the aristocracy and the places they live in and the clothes they wear, their behavior and the codes of behavior and so on and perhaps the servants life is a little bit more closely aligned to the lives that we’re all leading in a way anyway.

I think it is more egalitarian to the British audience because actually there’s a huge number of modern Brits who are descended from people who were in service and there were millions of people doing that so lots and lots of people can look back three generations ago when their grandmother was a maid. It’s quite normal.

The success in America is built on the mystique of the whole thing; it’s different and it’s quite glamorous. To Brits many of us live within a few minutes’ drive of some castle or ancient place. We live very comfortably alongside our history. Lots of people live in old houses. Some would say we look back a little bit too much. Perhaps we look back bit too much and America look forward a bit too much and aren’t knowledgeable enough about their history. There’s so much historical drama made in Britain that it’s not radical to us in a way.

My favorite scene in the film is the one with the Dowager Duchess and Lady Mary just quietly talking about some very important issues.

I think the passing over of the baton is always been a theme of the great houses. These characters are really tenants on a temporary basis and they have to look after it during their time but they may hand it on. That’s why they have survived because they do always hang on to the next generation and I think many families recognize the fact that these things can skip a generation. Violet, as she says in that scene, she loves her son but she sees Mary as the true descendent and I think that can be very true in families that sometimes there’s a very strong bond between grandparent and grandchild.

Mary’s probably was the heart of the show. When people say, “Who was your favorite character?” which they often do, I’d do a runaround and say I love all of them. But I always come back to her because she’s the heart of it.

We wanted to make the Downton movie. We didn’t say we were going to make a franchise but who knows, maybe we do go back if it does really well and Mary is the person who is running the whole thing and has the baton that Violet has passed her.