My Visit to LAIKA and Boxtrolls! 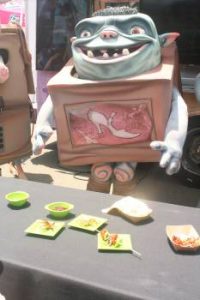 I’m excited to be able to share a secret I’ve been keeping since April. I got to cross a big item off my bucket list when I was invited to visit LAIKA Studios and get a behind-the-scenes glimpse of their upcoming film, “The Boxtrolls.” LAIKA is the stop-motion animation studio that produced two of my favorite films, “Coraline” and “Paranorman.” A small group of bloggers spent the day at their Portland, Oregon studio, speaking to the people who were putting the finishing touches on the film, which will open in September.

The title characters are creatures who wear cardboard boxes and live under a city that is a sort of mash-up of Victorian/Edwardian London with some elements of continental Europe and Asia. A little boy named Eggs lives with them and in the film he discovers the human world for the first time.

We met with LAIKA CEO Travis Knight, who is also an animator, as he was working on the last and longest scene in the film. It was 1100 frames, or just 45 seconds of film time. Stop-motion is painstaking and slow, with just two or four frames shot on a regular SLR camera before everything on the set is slightly moved for the next shot. He was working from a “shot sheet” that was broken down phonetically. “It’s not about patience. It is about the ability to focus intensively, like chess or a math problem,” Knight said.

This was one of 50 different sets in different rooms, each working two or four frames at a time. “You cast animators like actors,” he told us. Some specialize in distinctive physical movements, some in emotion, physics, or action.

“We don’t want a house style but there are strands of DNA” in the stories they choose. “We come back to the kinds of things I loved as a kid, like the Disney classics, with an artful balance of darkness and light, plus motion and dynamism.” They look for stories with “substance to affect people’s lives aesthetically and visually, bold distinctive stories with something meaningful to say. Something of substance to say to help families connect.” The thematic core of this film is “what makes a family, what defines a family.”

Everyone we met was passionately committed to stop-motion, the oldest form of filmmaking. “There is something about stop motion that is really magical,” Knight said, reeling off his inspirations and heroes. “Ray Harryhausen, Rankin/Bass – that old-school movie magic, like stage magicians bringing illusions to life, or Georges Melies taking technology and expanding it. We don’t quite believe that it is us who did it. Somehow they spring to life in our hands.”

4 Replies to “My Visit to LAIKA and Boxtrolls!”