SDCC 2017: Highlights Beyond the Headlines 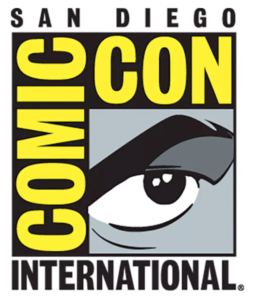 One of my traditions at San Diego Comic-Con is to pick a door in the Convention Center at random at some point during the four day celebration I call the Iowa caucuses of popular culture. SDCC is more than the appearances of the biggest Hollywood stars on behalf of upcoming blockbusters at the venue’s legendary Hall H, with people lining up as much as a day or two before to get one of the 6000 seats. Throughout the Convention Center are panels on past, present, and future comics, games, books, movies, and television shows, especially those with an element of sci-fi, fantasy, paranormal, or supernatural. Not exclusively, though — one of the panels I happened upon by chance a few years ago was the Archie Comics discussion about introducing Kevin, their first gay character. Any form of entertainment that has passionate fans will be somewhere at SDCC. This year, the panel I wandered into featured the distinguished actor Vincent D’Onofrio and the iconic rock star Meat Loaf, who are appearing together in a new SyFy television series called “Ghost Wars.” They were followed by David Duchovny, who told us about his new Audible audiobook, “The X Files: Cold Cases.

Some of the most interesting things I saw and heard at Comic-Con this year:

Brian Selznick, author/illustrator of Wonderstruck and screenwriter of the new movie adaptation directed by Todd Haynes, told me that just as one of the two stories in the book is told in pictures only, without words, that portion of the movie will be silent. And so, those scenes, set during the silent era of the movie, features deaf actors playing hearing characters. We see them speak, but do not hear them, and so it is the only form of performance where they are indistinguishable. One challenge: letting them know when their name is called, so they have to turn around to respond.

Leslie Combemale put together a panel of women directors that was, in my experience the only panel where everyone thanked the moderator and the other panel members so graciously. SDCC is the world’s best place to spot cool t-shirts, but I especially loved the one worn by panelist Gina Prince-Bythewood: Strong Female Character. It was a thrill to hear Victoria Mahoney say, “I leave my house to find the magic, where the crazy stuff lives” and say “We have so many stories to tell. Do not let yourself go silent.”

I always love the MAD Magazine panel, with “the usual gang of idiots,” including editor John Ficarra and art director Sam Viviano. And yes, they feel like Donald Trump was created just to give them material. They began with a rollicking rendition of their version of “America the Beautiful,” featuring lyrics like these:

During the Q&A, a middle-aged man in the audience got up to sing one of MAD’s 1960’s song parodies from memory, and a young boy asked about the current issue. I hope 40 years from now, he’ll be singing one of this year’s song parodies at the 2057 MAD panel.

I rode a dragon at the X-Box booth!

I love the behind the scenes panels with storyboard artists, production designers, costume designers, and composers. I learned how the story of “Zootopia” evolved and heard composer Ludwig Göransson and production designer Hannah Beachler talk about working with director Ryan Coogler on smaller projects before joining forces for one of 2018’s most anticipated films, “Black Panther.” We were the first to hear some of the African music Göransson recorded for his score. Joe LoDuca told me about writing music for the “Evil Dead” movies, and assured me that horror people are the nicest people. Production designer Gary Kordan (the new FOX series, “Ghosted” with Craig Robinson and Adam Scott) told me that the secret to creating a good set is making it look lived in.

The whole secret to my job is, once the set is done, to age it. You have all the scenic painters come in and add fingerprints, smudge marks, scuff marks, dust, spider webs. All the kind of things that exist in real life, you do on a set and then it doesn’t look like a sitcom or a multi-cam brightly lit thing. It looks aged and it looks gritty. Even if it’s the funniest comedy, it doesn’t matter, because I believe the comedy is better when the set design is more realistic. It feels more absurd that this real thing is happening and these people are saying this on a set that has splatter marks on it and dust and age.

I always look forward to some amazing new advance in technology at SDCC, the first place I saw 3D printers, virtual reality headsets, and drone cameras, all before they were available for consumers. This year I was astonished by Adobe Character Animator, which allows you to make a drawing and then aim the camera at yourself to animate it, following your facial expressions and movements. This was what made it possible for the live “Simpsons” episode that had Homer taking calls in real time from viewers.

I had a chance to talk to veterans like Marty Krofft, who is rebooting “Sigmund and the Sea Monsters” for Amazon Prime, starring David Arquette, and current stars working on new projects, like Seth Rogen (producing and directing) and Josh Hutcherson (acting) in a new Hulu series, “Future Man.” I spoke to “SNL” star Aidy Bryant about her new animated Amazon Prime series called “Danger & Eggs,” about an adventurous little girl and her best friend who is much more cautious, probably because he is an egg. The show has a wonderful commitment to inclusivity and diversity, including same-sex parents and a child who uses the pronoun “they.” And I spoke to breakthrough artists like Instagram and YouTube star Splack (Jean Robert), who told me how he started making Vine videos when he had nothing, and found a million followers on social media. Jake Monaco told me about using PVC pipe to create the music for “Dinotrux” and writing new music for the updated “Be Cool, Scooby-Doo.”

A highlight of every year’s SDCC is the costumes, many meticulous, homemade re-creations of superhero or “Game of Thrones” looks, and many with a personalized twist. I especially loved a tiny Wonder Woman with her wheelchair serving as her invisible airplane, and the woman dressed as Tippi Hedren in “The Birds,” not just the iconic green suit but with black birds attached to her sleeve and hair. One of the most popular events is always the costume competition on Saturday night, called the “Masquerade.” This year’s featured “Game of Thrones” characters signing their version of a song from “Hamilton.”