It went so fast!  Today started with a demo of the new Dr. Who VR game. The first time I tried VR at Comic-Con they made the most of the ghostly images that was all they could produce by making the story fit those pictures.  This game is many, many leaps forward, as the doctor (voice of the 13th doctor from the series, Jodie Whittaker) is missing but has left some clues and a way to McGuyver a communications device. I was not a good player in part because I am a terrible gamer but in part because I was enjoying the level of detail and wanted to look at everything. Developed by immersive entertainment studio Maze Theory, led by former Activision and PlayStation veterans, Doctor Who: The Edge Of Time will launch on PlayStation VR, Oculus Rift, Oculus Quest, HTC Vive and Vive Cosmos in September 2019. 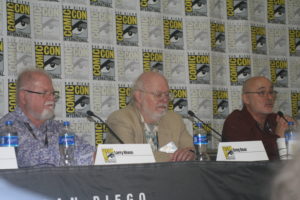 I made it into the legendary Hall H (Comic-Con’s biggest venue) for the “Mayans” session. Comic-Con attendees got an exclusive look at the first 15 minutes of the show’s second season, which includes an ultra-violent shoot-out. The actors said they treasure the opportunity to work together, and to have a chance to take often-stereotyped characters and give them depth and complexity.

And then the annual conclusion, the “Starship Smackdown,” where a group of very funny sci fi nerds debate which is the greatest fictional spaceship of all time with a combination of intense knowledge of minutiae and a very silly sense of humor (which is pretty much the theme of Comic-Con). There’s always a lot of spirited argument, but the winner is usually the Enterprise or the Millennium Falcon. They know their stuff.

I’ll be posting links to some of my writing elsewhere, so stay tuned for more.