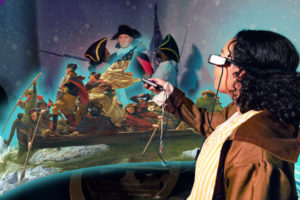 In the 18th century, there was no Google Images. If you wanted to know what a famous person like Voltaire or Napoleon looked like, you went to the exhibitions of Madame Marie Tussaud to see her beautifully modeled wax sculptures. That was the most advanced technology of the time for making audiences feel that they were in the presence of the great names of the day.

Madame Tussaud’s wax figures are now on display around the world. Even though we can instantly find pictures of historical figures and our favorite celebrities on our phones, there is nothing like the experience of standing next to a near-perfect 3D version of George Washington, Denzel Washington, or Taylor Swift and taking a selfie.
And now, in the tradition of Madame herself, the latest technology is available at the Madame Tussaud’s location in Washington DC to give visitors an even more immersive augmented reality experience through glasses and ear buds. The audio will be available in English, Spanish, and Mandarin and the glasses fit comfortably over visitors’ prescription glasses “unless you are Elton John in the 1970’s,” says Greg Werkheiser, CEO of Richmond, Virginia-based ARTGlass, which worked with Madame Tussaud’s on the content of the platform.

He also pointed out that unlike Virtual Reality, which is enclosed so that everything you see is within the program, with augmented reality “you don’t have to sacrifice real world experience.” You will see what is around you at the same time as the sounds and images of the augmented reality experience. With the glasses, “you don’t have to scan or push.” It is fully immersive, intuitive, and interactive, bringing the exhibits to life.

Triggered by facial recognition software, the glasses (included in the regular price of admission) bring up audio and visual enhancements to the character on display, led by Madame Tussaud (potrayed by an actress in costume) herself. So, standing before Thomas Jefferson might bring up a brief discussion of the second President’s Monticello home in Virginia, which appears on the nickel. In the Watergate section, visitors will be challenged to find the recording bug in the room. The hall of 1920’s and 30’s figures brings up a flapper and a man wearing a barrel who lost everything in the 1929 stock market crash. In the disco era display, you can select a dance lesson and try out a few fancy steps. There is a stirring glimpse of the Reverend Dr. Martin Luther King’s “I have a dream” speech. The most powerful augmented reality moment invites visitors to take a bus seat next to the figure of Rosa Parks. An angry man then appears via the glasses, telling you to give up the seat or he will call the police.

Visitors can adjust the experience by electing to see and hear more, so it is interactive as well as immersive. ARTGlass has created experiences in European museums and historic sites including the Leaning Tower of Pisa and George Washington’s home, Mount Vernon. Here they worked closely with Madame Tussaud’s staff to make the augmented reality consistent with the attraction’s unique mix of history, culture, and fun.

(NOTE: My thanks to Mira Singer for her assistance in preparing this report.)