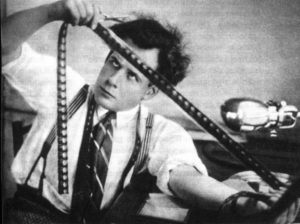 Today’s Google Doodle pays tribute to one of the great visionaries of the early days of movies, Russian director Sergei Eisenstein on the 120th anniversary of his birth.

The earliest films were pretty much just using the camera as though it was seated in the audience of a play, with some close-ups. Eisenstein was hugely influential in the development of “montage” story-telling, with cuts back and forth to different points of view. His classic “Odessa Steps” sequence from his film “Battleship Potemkin” is still studied today.

This scene in “The Untouchables” pays tribute to it.

You can learn more about Eisenstein here:

It is interesting to note that his father, Mikhail Eisenstein, was an architect whose majestic and imaginative work is still on display in Riga, Latvia.