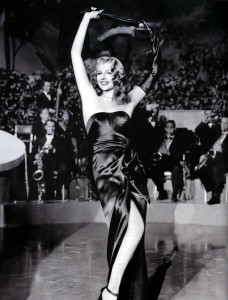 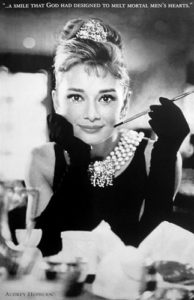 At Thanksgiving, my mother brought out a collection of about 30 pairs of gloves, most of them her mother’s but a few my sisters and I had when we were little girls back in the days when young ladies wore white gloves to go into the big city, attend religious services, or fly in an airplane. I took home two pairs of wrist-length white kid gloves and our daughter picked out two elegant pairs of opera-length gloves. It made me think of some of my favorite gloves in classic movies. Like cigarettes, gloves give rise to a ballet of expressive movements that can be very evocative and even help to tell the story and reveal the character. These are not wool or leather gloves worn for warmth or protection; these are indoor gloves, worn for elegance. Well, except for the last two.

You can glimpse Marilyn Monroe wear two pairs of gloves in this trailer for her movie about a wealthy man who tries to shut down a satiric musical show because it makes fun of him. The pair I love is the short daytime gloves she wears in the elevator, while Yves Montand is kissing her and singing.

2. The Age of Innocence

Director Martin Scorsese shows us that sex and violence can be powerfully portrayed even without guns and goodfellas. In this story of impossible love based on the novel by Edith Wharton and set in 19th century New York high society, Daniel Day-Lewis kisses Michelle Pfeiffer on the wrist under an unbuttoned glove and it is as erotically charged an image as has ever been filmed.

Older sister Meg loans a glove to her impetuous sister Jo so that they can both be properly attired at a party in this film of the classic novel by Louisa May Alcott. Jo has spoiled one of hers and it would be unthinkable for well-brought-up young ladies to go out without them, so each wears one and carries one.

4. Woman of the Year

Spencer Tracy and Katharine Hepburn began one of the great on and off-screen love stories in this film about the romance between a sports writer and a columnist. The gloves (and hat) she wears to her first baseball game are hilarious.

Only Vincente Minnelli would think of putting his heroine (Judy Garland) in purple gloves for her clang-clang-clang “Trolley Song” number in this turn-of-the-century musical based on the childhood memories of Sally Benson at the time of the St. Louis World’s Fair.

Rita Hayworth wears long black gloves in one of the steamiest dance numbers in history, “Put the Blame on Mame.”

Watch this movie and you’ll want to wear gloves like Audrey Hepburn, the essence of elegance in this Truman Capote story about two people who have made many compromises but find the courage to build a relationship that will make them be honest with each other and themselves.

9. This Is Spinal Tap

This outrageously funny mockumentary about a metal hair band includes a hilarious scene where they get the news that the record company will not permit the art they selected for their new album, “Smell the Glove.” For some reason, they found it offensive.

Who can forget the Dreadful Flying Glove, one of the most important weapons of the Blue Meanies but no match for the music and love of the Beatles in this animated classic?

And in one of my favorite opening credit sequences, the lovely ladies of “Deliver Us From Evil” dance to “You’re All I Need to Get By” in elegant attire, including, of course, gloves.

Night at the Museum: Battle of the Smithsonian

Everything is bigger, better, and especially funnier in this sequel to the surprise hit Night at the Museum. In the original, Larry (Ben Stiller) was an unsuccessful inventor who took at job as a security guard at New York’s Museum of Natural History and found that all of the exhibits came to life at night. With the help of Theodore Roosevelt (Robin Williams), and the young Pharaoh Ahkmenrah (Rami Malek), Larry was able to reconcile the dispute between a cowboy named Jedediah (Owen Wilson) with his neighboring diorama-mate Octavius (Steve Coogan), tame both a dinosaur skeleton and an enormous totemic sculpture, and defeat the bad guys who tried to set him up and steal the magic tablet.

As this film begins, Larry has achieved his dream of success and is doing infomercials with inventions like the glow-in-the-dark flashlight. He is so busy he seldom sees his old friends at the museum and he is shocked to find that they have all been packed up. The museum is going all 2.0 and is about to be tricked up with fancy interactive animatronics. And all of the old exhibits are being shipped off to the Smithsonian Institution in Washington, not for display but for storage.

And that is how Larry, the Museum of Natural History exhibits from the first movie, and dozens of new characters from the world’s biggest museum complex in Washington DC, the Smithsonian. Ahkmenrah’s evil brother Kahmunrah (Hank Azaria) wants to use the tablet to raise an army of the dead to take over the world. Larry will have to rely on his old friends and some new ones, like Amelia Earhart (Amy Adams) and George Armstrong Custer (Bill Hadar) to fight Kahmunrah and his allies Ivan the Terrible (Christopher Guest), Napoleon (Alain Chabat), and Al Capone (Jon Bernthal), who is in black and white because he was brought to life from an old photograph.

Yes, even the pictures, paintings, the gift shop bobble heads and the sculptures come to life in this film and there is one sequence where Larry escapes into Alfred Eisenstadt’s classic photo of VJ Day in Times Square, and he later empties the water out of a Turner seascape. The special effects are exceptionally well done, but what makes the movie work is its inspired cast, all having a blast and trying to top each other. Over and over, the same old gag works just fine as the best all-star comedy cast since “It’s a Mad Mad Mad Mad World” finds the sweet spot between action and inspired silliness.

An abused girl with a gentle soul and a belief in Jesus changes the life of a homeless veteran in this movie from writer-director Jefferson Moore. While the movie is uneven in quality, it is good to see a story with a character whose frank and open belief is a source of strength and guidance for her and an inspiration for others. I especially liked the way it portrays unconditional love as the core of her relationship with God. (NOTE: character abuses drugs and alcohol, child abuse, homelessness, some violence, corrupt officials)

A wonderful clip from one of the greatest concert specials in television history:

I am delighted that this charming film is available again this year. Enjoy!