I love this supercut of Tom Cruise’s best running scenes, first because it shows the range of films he’s worked in over the decades, and the different ways different directors and cinematographers shoot the scenes (and some similarities), and because I enjoy watching Cruise, but most of all because this is such a gorgeous love letter to the movies.  It is a beautiful little movie on its own.

You Can Help Support This new Ed Asner Film on Indiegogo

Ed Asner stars in this new film about a young man who finds a book at his grandmother’s memorial, with a series of fantastical tales that his grandfather wrote for his grandmother. Each is a different romantic fantasy about how they meet. Those stories help him find his own love.

The filming is over, and the filmmakers need some help for post-production so that it can be released. They have an Indiegogo campaign and I’ve contributed. Look for me in the credits as an associate producer, and for $100 you can be one, too!

Related Tags:
Behind the Scenes Crowdsourcing In Production 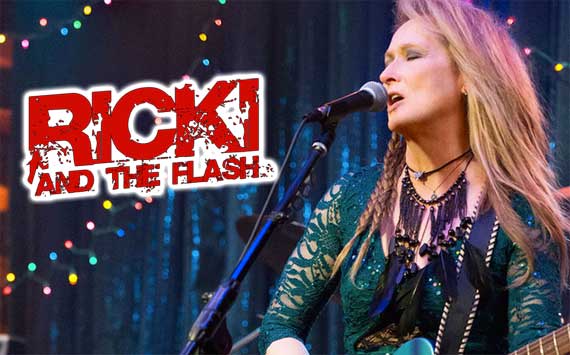 August is usually one of the slowest months of the year for major movie releases, but this year we have some prospects that could include both blockbusters and indie critical darlings. I’m especially looking forward to:

Shaun the Sheep — The latest from the Wallace and GromitChicken Run guys, which means it will have wonderfully tactile stop-motion animation and hilarious, impeccably timed stunts and sight gags.

Rikki and the Flash Meryl Streep and her real-life daughter Mamie Gummer co-star in this story of a singer in a bar band to returns to her estranged family when her daughter’s husband leaves her. It’s also a re-teaming with Streep’s “Sophie’s Choice” co-star, Kevin Kline, and Streep’s bandmate and love interest is played by 80’s soap star/pop star Rick Springfield.

Dark Places Members of a group who study grisly murders contact a woman who, as a young girl, survived an attack that killed her parents and testified that it was her brother who did it. Charlize Theron stars, and it is based on the book by Gone Girl author Gillian Flynn.

Straight Outta Compton Ice Cube’s son stars in the story of N.W.A., their rise to fame and their influence on music and culture.

American Ultra He’s the next Lex Luthor and appears in next week’s “End of the Tour,” but Jesse Eisenberg also found time to star in this slacker action comedy about an unexpected undercover agent — even to himself. Kristen Stewart plays his girlfriend.

Learning to Drive Katha Pollitt’s bittersweet essay about getting her first driver’s license in her 50’s after a miserable break-up has been adapted for a film with Sir Ben Kingsley and Patricia Clarkson.