58 Years Ago Today: Newton Minow and the Vast Wasteland Speech 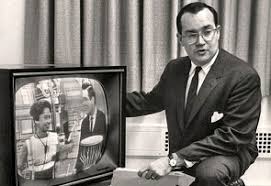 On May 9, 1961, my father, Newton Minow, delivered a speech that continues to inspire the conversation about media. He was President Kennedy’s new Chairman of the FCC, just 35 years old, and in his first major address he told the National Association of Broadcasters that while there was much to admire on television, too much of it was a “vast wasteland.” Last Friday, our family had the privilege of watching him receive the Chicago Television Academy’s Silver Emmy Award for his contributions to broadcasting, including the launching of the first telecommunications satellite, the creation of PBS, and helping to start the Presidential debates. He continues to serve as Vice Chair of the Commission on Presidential Debates, which he helped to form.

He told the audience about the day before the speech, when President Kennedy brought Commander Alan Shepherd, who had just become the first American in space, and his wife, to the National Association of Broadcasters event Dad would be speaking to the following day.  President Kennedy invited Dad to come upstairs while he changed his shirt, to give him some ideas about what to tell the broadcasters.  Dad suggested that he talk about the difference between the way Americans and the Soviet Union conducted their space program.  In the US, we had all the television cameras there to show the American people, good or bad, what was happening.  The authors of the forthcoming book and documentary Chasing the Moon tweeted about it today: 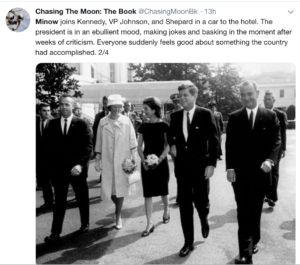 At the time Dad called on the broadcasters to do better, there were just three national television networks. There was no PBS, just a National Educational Television which was not even available in most of the country, including Washington DC itself. My father told the broadcasters that as long as the airwaves were a scarce resource, they would have to do better to live up to their statutory obligation to serve the public interest, convenience, and necessity, especially with regard to coverage of news and programming for children. He worked over the next half-century to make more choices available, including cable and satellite as well as the creation of a robust public television station. He helped get the original funding for “Sesame Street,” served as chairman of PBS and of the Chicago affiliate WTTW, served on the board of CBS, is vice-chair of the Presidential Debates Commission, pushed for closed captioning to make television programming available to hearing-impaired viewers, and argued one of the only cases in history to have a broadcast license rescinded — a station that spewed hatred across the airwaves. And in protest of his critique of television, the sinking ship on “Gilligan’s Island” was named after him, the S.S. Minnow!

He is also the world’s best dad and we are all so proud of him.