Interview with My Dad, Newton Minow, about the FCC, the SS Minnow, Saying No to JFK, and Media Today 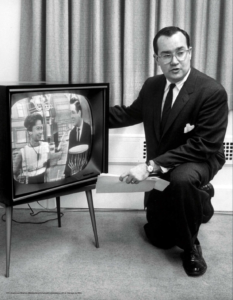 One of the great pleasures and honors of my life was the chance to interview my wonderful dad for Emmy Magazine in honor of the upcoming 60th anniversary of his famous speech to the National Association of Broadcasters, calling television “a vast wasteland.”

Sixty years ago, on May 9, 1961, the 35-year-old Chairman of the FCC, Newton Minow, made three significant appearances. In Washington, he gave his famous “vast wasteland” speech to the National Association of Broadcasters, telling them that while “when television is good, nothing is better,” he expected them to do more to uphold their statutory obligation to serve “the public interest, convenience, and necessity.” Then he went back to the FCC office, where he met with Elizabeth Campbell to sign the original license for WETA, the first educational television station in the nation’s capital, now the producer of the Ken Burns documentaries and the nightly Newshour. And then he flew to Chicago to attend the father-daughter dinner for my Brownie troop.

I often thought about how those three events defined his character: inspiring those around him to do better, supporting the visions of people making enriching cultural content and reliable news sources widely available, and always putting his family first.  Over the next decades this was reflected in his efforts as a founder and board chair of PBS, a director of CBS, helped create the Commission on Presidential Debates (CPD), where he served as vice chair until this year, worked to require the V-chip and closed captioning, helped get the start-up funding for “Sesame Street,” and argued for the rescission of the radio license of a station that broadcast virulently racist and anti-Semitic programming.  And he and my mom will celebrate their 72nd wedding anniversary this spring.