MAD Magazine: This was the first MAD panel with the new staff, following the magazine’s move from New York to LA in January. Bill Morrison and the less-usual gang of idiots introduced themselves “as the all new hip, cool, MAD,” reassuring us that “we’re just as slovenly and dull and ordinary as the staff in New York.” Then they proved it by showing us a series of hilarious tweets from people who really hate the new version and feel very, very strongly about it.

Morrison showed us some new features and introduced us to new staff, and made some of the room’s long-time fans by promising to bring back some beloved MAD classic sections like “The Lighter Side Of…” and “A MAD Look At….” He also promised that it would not always reflect “the white male perspective.” They’re also staying up to date with a Twitch channel for watching people do things.

And there was a tender tribute to the beloved Nick Meglin, the heart and soul of MAD, who died in May.

How to Read Nancy It has been said that the comic strip “Nancy” endures only because it takes less energy to read it than to skip it. It is both iconic and generic — a panel of “Nancy” is used to illustrate the term “comic strip” in the American Heritage Dictionary. Creator Ernie Bushmiller kept a copy open to that page in his studio.

Scholars Paul Karasik and Mark Newgarden not only wrote a book about what is often considered the simplest comic strip ever; they wrote an excellent and very smart one. It seems somehow fitting that the strip they selected for deep analysis was the one that happened to fall out of a book and was thus easy to photocopy. And yet, it could be used to illustrate nine aspects of comics language. “The gag takes precedence over everything, including temporal reality,” they explained. “It’s a real kid in a completely unreal universe.” The gag may be simple, but the composition is very sophisticated, both in individual panels and in the strip as a whole. 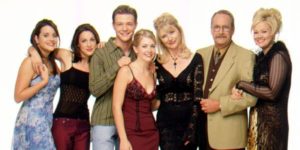 WitchesSuperheroes tend to be male. Female characters with special powers tend to be witches. And the witches panel at Comic-Con had women from shows like the original and remake of “Charmed,” the original “Sabrina the Teenage Witch” (also about to be rebooted), and “Supernatural” to talk about feminine power and the threat powerful women have been perceived as over the centuries. Nell Scovell (creator of “Sabrina the Teenage Witch” and author of the acclaimed memoir Just the Funny Parts) talked about the wish fulfillment of the power of magic — to movie objects with our minds or to go back in time. Sabrina was a teenager finding her own voice and the powers were a metaphor for that. It was “a way to run all the old teenage stories through this new lens.” She also worked on the original “Charmed,” where “you undercut the horror with the sisterhood. They can be badass and then have tea,” like the Patsy and Edina on ‘Abfab,’ whose friendship makes their outrageously selfish behavior less appalling.