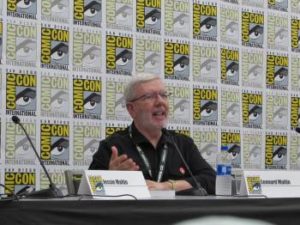 The name of the panel was “You’re Wrong, Leonard Maltin,” and the audience was invited to argue with one of America’s most respected and beloved film critics. Disagreement there was, but all presented with affection and good humor, delightful moderated by Jessie Maltin Hadfield, his daughter.

Maltin began by quoting Steven Colbert: “opinions are like mixtapes–I don’t want to listen to yours.” He continued by citing Harlan Ellison: “Everyone is entitled to an informed opinion.” He also cautioned us about ranking movies in top ten lists, top one hundred lists, etc. “They have one purpose only — for people to argue.”

The first challenge was to one of his most controversial reviews, just two stars for “The Dark Knight.” Remember this was at Comic-Con, where people have very strong feelings about superhero movies. “Each film is rated on how well it meets its own goals,” Maltin said.” (That’s my approach as well.) He stuck with his verdict on “Deadpool 2” as well. “We’ve seen it before. Mildly amusing but not cause for celebration.”

Maltin said that he always wants and even expects a movie to be good. Even when it is disappointing, he looks for a good moment or a good performance he can highlight in his review.

Maltin shared some good stories, especially one about shooting a five minute segment with Warren Beatty, dressed as Dick Tracy. “He will reshoot until somebody turns out the lights. He may still be shooting.”

By the end of the panel it was clear that people had very strong opposing views about movies but everyone loves Leonard Maltin.

Just as much fun — Maltin also appeared on a delightful panel paying tribute to the delightfully trashy Queen of Outer Space, starring Zsa Zsa Gabor and celebrating its 60th anniversary, and of some of the other cheesy Warners films of the era.