Oscars 2019 — No Host, Some Progress, and Gaga/Cooper Sizzle

Raise your hand if you missed having a host at the Oscars. Yeah, me neither. Without a host to mock-mock the stars and studios and be instantly dissected on social media, the Oscar telecast seemed almost — supple and elegant, if still not anywhere close to the authenticity of the Spirit Awards or the grace and aplomb of the Tony Awards. Highlights, lowlights, upsets, and a couple of moments sure to be on Oscar highlight reels for decades to come.

Best idea: Skipping the host. That position, meaning both the assignment and the opening of the show, has become impossible. Starting with a rousing musical number from Queen (though Adam Lambert is no Freddie Mercury, and not even a Rami Malek) was just fine. And the always-brilliant trio of Tina Fey, Amy Poehler, and Maya Rudolph gave us a light sprinkling of pointed but not mean one-liners to remind us not to take the awards too seriously. Thanks, Academy, for jettisoning almost all of the achingly arch fake banter of the presenters, too.

Worst idea: Trains. Stylists, please remember that the stars may have to do more than swirl on the red carpet. When they have to go up the stairs to claim their Oscars, those trains get in the way. Huge thanks to the gallant Chris Evans for discreetly lending a hand to Regina King.

Best moment: Screens all around the world melted during the sizzling performance of “Shallow” by Lady Gaga and Bradly Cooper. Instead of coming out from the wings, they simply got up from their seats in the audience and sat down on stage as naturally as if it was their own living room. The performance was breathtakingly intimate and touching. When he left his stool to come sit beside her on the piano bench, their deep affection and respect was palpable.

Best omission: In multiple wins for “Bohemian Rhapsody,” no one mentioned the now-disgraced director. 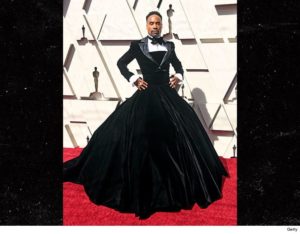 From Broadway star Audra McDonald: Audra McDonald’s time of death: Billy Porter O’ Clock.
From writer/director Ava Duverney: I really just think I’ve seen all I need to see as this outfit is paying all my bills, offering advice, watering my plants and generally giving me life as well as afterlife. I’m going to go somewhere and have a good cry. Amen.
And Porter himself, who noted that the ensemble was a tribute to iconic Hector Xtravaganza of the House of Xtravaganza, who died in December: “My goal is to be a walking piece of political art every time I show up.”

Color theme of the evening’s couture: Pink, worn by many of the most glamorous stars, including Best Picture presenter Julia Roberts, who looked ravishing.

Best surprise: The conventional choices for Best Animated Feature would be whatever movie Disney or Pixar released. I loved “Incredibles 2” and “Ralph Breaks the Internet,” but was thrilled to see the wonderfully inclusive and wildly innovative “Spiderman: Into the Spider-Verse” win. My Spidey sense tingled right up my spine with that one.

Best development: Oscars are a little less white this year, not just in the key acting awards, with Regina King and Mahershala Ali winning for supporting roles (Ali is now only the second black performer to win more than one Oscar, after Denzel Washington), but crucially historic wins at the below the line level, with “Black Panther’s” Ruth Carter (costume designer) and Hannah Beachler (production designer, with Jay Hart) becoming the first black women to win in their categories.

“Roma” became the first Mexican film to win Best Foreign Language Picture, and Alfonso Cuaron, its writer/director/cinematographer, who based the story on his own life, won for direction and cinematography as well. This was the fifth time in six years a Mexican director has won Best Director. The other categories had a heartening diversity as well, including Peter Ramsey, the first black director to win an Oscar for Best Animated Feature, and the Chinese-American Domee Shi, who wrote and directed the award-winning animated short “Bao.” Three of the four acting awards went to people of color.

Far to go: But the writing awards sharply highlighted the way that the AMPAS is still grappling with the way American movies tell stories about race and class. The thrill of the adapted screenplay win by Spike Lee for “BlackKklansman.” Lee has been criminally overlooked by the Oscars for decades (except for one honorary award). The joy at his award was instantly eclipsed by the original screenplay award to “Green Book,” which many people consider to be condescending and insensitive. The choice of “Green Book” as Best Picture prompted an explosion of furious Twitter comments. The clueless acceptance speeches of the writer/producers failed to mention either Dr. Don Shirley or the titular travel guide and seemed clueless about the way some audience members responded to it. Their kumbayah-style comments came across as, well, condescending and insensitive.

I gave up on the idea of the Oscars as indicators, much less arbiters, of absolute value, aesthetic or cultural, many, many years ago, which leaves me free to enjoy the show as what it is — the industry saluting and, more important, revealing itself. If you want to know which are the best films of the year, check out the Critics Choice Awards, voted on by people whose profession is to watch all movies, not just those supported by the studios for awards, and to evaluate them. Or check out the Spirit Awards, given the night before the Oscars, which pay tribute to the films made entirely out of passionate commitment to the art of telling stories, not the art of making money. And the awards show has an outsider perspective that ensures no one takes any of it too seriously.

But the Oscars are always un-missable, and this year’s show, frustrating as it was, to me showed great progress and has me already looking forward to next year.