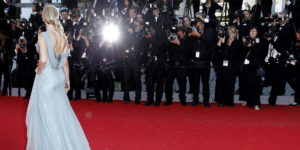 The New York Times, which broke the story about the abuse by Harvey Weinstein, is changing the way it reports on the red carpet at awards shows.

Red carpets have always been a clash of fame, sponsored content and super-cute shoes. The red carpet is where huge, powerful industries — celebrity, fashion, Hollywood, media, beauty, publicity — meet. Now that the curtain is finally being lifted on some of the grimy underbelly of Hollywood, we feel it’s more important than ever to not treat awards shows as silly things for silly people.

Given the enormity of our cultural reckoning in the last year with how women are treated in the workplace, on the internet and in Hollywood, we want to take a fresh look at how we cover this stuff. We have some plans about how to recognize the cultural moment — and would love to hear from readers about what you would like to see (and not see).

I’ll be very interested to see where this goes.  I don’t watch red carpet coverage (and won’t do it anymore myself) because it is so vapid.  I hope they ask people on the red carpet about why the projects were so important to them and what they hope people will think about what they see.  And that they give credit to the hard work of the designers they are wearing, too.