From my father, Newton N. Minow, published today on Medium.

“Do you know anything about telecommunications satellites?” It was my first day at the Federal Communications Commission, where I had just been appointed Chairman by President John F. Kennedy. It was 1961 and I was 35 years old. The question came from one of the other Commissioners, T.A.M. Craven, originally a Franklin Roosevelt appointee, then re-named by Eisenhower. Craven had formerly been the Commission’s Chief Engineer. 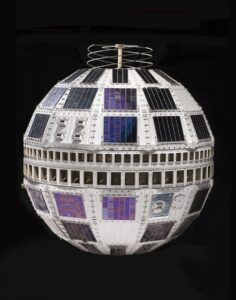 I admitted I did not know anything about them. He groaned. “This is the one area where we are ahead of the space technology of the Russians,” he said. And he began to tell me that Bell Laboratories had developed a satellite that could be launched into space to bounce signals and open up endless new possibilities for broadcasts and telephones.
In 1961 we were just a few years from having to call the operator to place expensive long-distance calls. There were just two and a half national television commercial broadcast networks and many communities had no local station. Only a few cities had what would become nationwide public television. Today we take it for granted that we can watch world events from royal weddings to the Olympic games to the Oscars in real time, but that was a long way off in 1961. As Commissioner Craven explained to me what the satellite could do, it seemed like something out of Flash Gordon. And yet, we did not imagine a fraction of the changes that launch would bring.

The technology was there. But first, we needed a plan to take it to Congress. The Communications Satellite Act was complicated and controversial. It required coordination with American businesses and the government (we wanted to make sure that no one corporation would have control). Today it might be harder to imagine that we were able to get bi-partisan legislation passed within a year than it is to count up the monumental changes the satellite has brought, but it was one of three major pieces of legislation we got passed to make telecommunications more broadly accessible and expand the choices for viewers between 1961–63.


I am the second from the right at the signing ceremony of the Communications Satellite Act in the Oval Office. See below for a full list of those in the photo.

When he signed the new law, President Kennedy said,

By enacting this legislation, Congress has taken a step of historic importance. It promises significant benefits to our own people and to the entire world. Its purpose is to establish a commercial communications system utilizing space satellites which will serve our needs and those of other countries and contribute to world peace and understanding.
…
The benefits which a satellite system should make possible within a few years will stem largely from a vastly increased capacity to exchange information cheaply and reliably with all parts of the world by telephone, telegraph, radio, and television. The ultimate result will be to encourage and facilitate world trade, education, entertainment, and many kinds of professional, political, and personal discourse which are essential to healthy human relationships and international understanding.

Better and less expensive communications, like better and less expensive transportation, are vital elements in the march of civilization. This legislation will, by advancing the peaceful and productive use of space, help to accelerate that march, and I extend appreciation to the Members of Congress who worked so hard to secure passage of a very effective piece of legislation.

The satellite was launched on July 10, 1962, 60 years ago today, the world’s first commercial payload of any kind in space. According to NASA, “Two days later, it relayed the world’s first transatlantic television signal, from Andover Earth Station, Maine, to the Pleumeur-Bodou Telecom Center, Brittany, France…. The first images, those of President John F. Kennedy and of singer Yves Montand from France, along with clips of sporting events, images of the American flag waving in the breeze and a still image of Mount Rushmore, were precursors of the global communications that today are mostly taken for granted.”

Last month, my family was in Europe, where they were able to use GPS to get around, send me photos by email and text, watch the January 6 hearing live on CNN, and call me for nominal cost, all made possible by telecommunications satellites that began with Telstar.

President Kennedy promised that America would put a man on the moon. I told him the telecommunication satellite was even more important because the satellite will launch ideas, and ideas last longer than people.


Souvenir of the launch