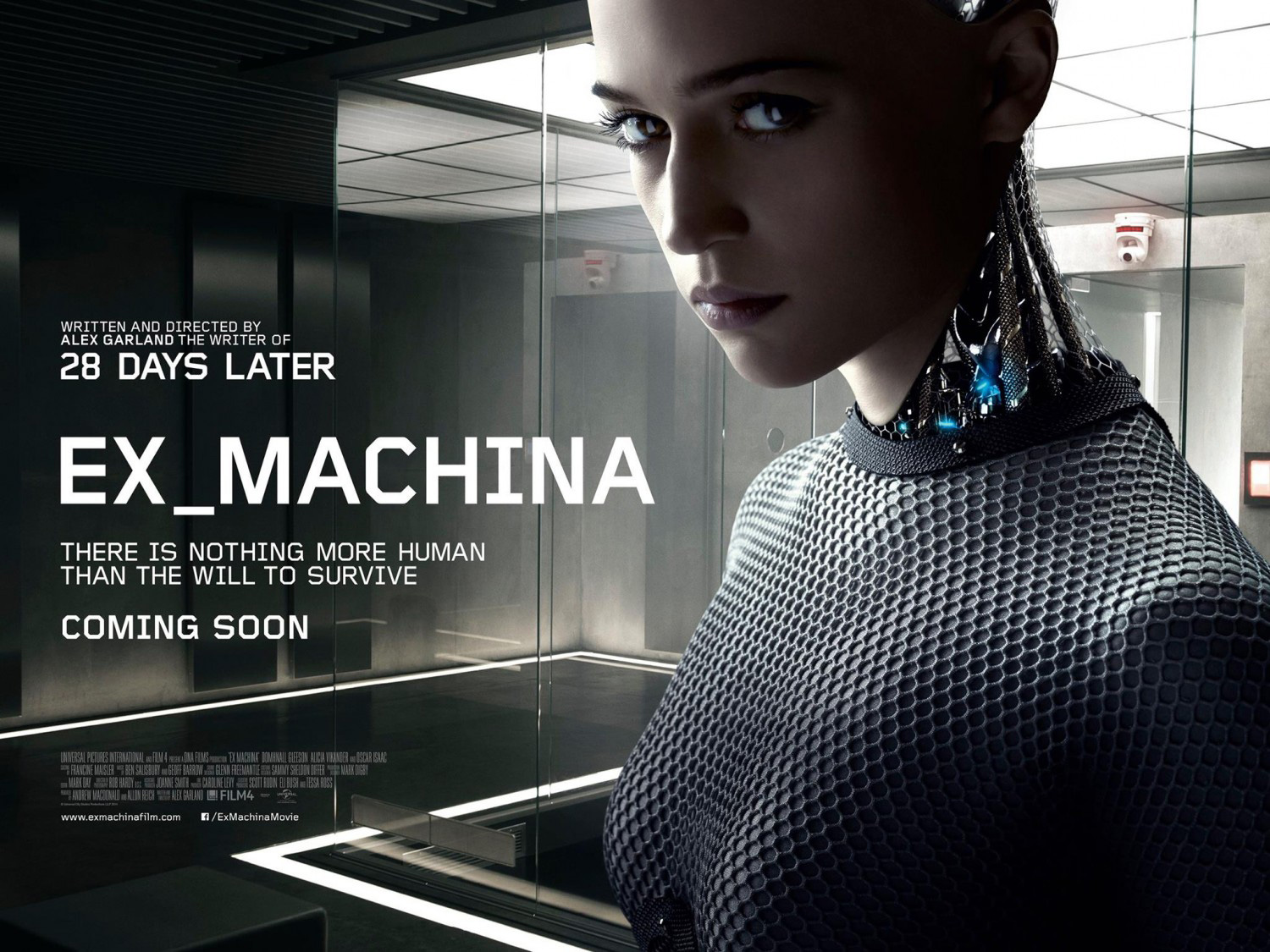 Alex Garland is the screenwriter of thought-provoking sci-fi films like “28 Days Later” and “Never Let Me Go.”  He wrote and for the first time directed “Ex Machina,” a fascinating story about Caleb, a computer programmer (Domhnall Gleeson), invited to the remote home of Nathan, a reclusive genius (Oscar Isaac), to evaluate a new artificial intelligence persona in the body of a lovely female robot called Ava, with the exquisite face and voice of actress Alicia Vikander.  Nathan tells Caleb to perform a “Turing test” but as he and we learn, he is really the one being tested.  There’s a reason the Turing test is blind.  Ava’s programming and appearance are designed to play into Caleb’s susceptibilities.

I loved talking to Garland about the film.

You must know Domhnall Gleeson pretty well by now. But this was your first time working with Oscar Isaac, right?

It is the third movie we have worked on together. So we’ve known each other backwards.  Not only that, the first movie he ever worked on, “28 Days Later,” was with his dad. So out of five movies four of them have been with Gleeson so I know that clan and I know Domhnall really very well. We’re friends. So casting him is different. I just call him up and say, “Look man, there is this thing, I really think it would be good, would you take a look?” The thing about Oscar was I have seen him in stuff like Ridley Scott’s “Body of Lies,” set in the Middle East, and he is acting opposite Leonardo DiCaprio, which can freak people out, and I was thinking, “He is just owning every scene, and what is he doing? How is he owning it?” I can’t see what he’s doing, he is relaxed and he is so natural, an incredibly naturalistic performance but also very magnetic, a sort of gravity suck performance that just pulls you towards it. And so there’s something fascinating about him. Every time I saw him it might be in a bad movie but he’d good.

When you hire an actor it’s like a three years lag in a funny way. Everybody starts talking about these guys before they really hit and everybody knew Oscar was good. That was the word going around, this guy was really good. I knew he was good and then I met him and he was really smart. Again not all good actors are smart.  They can project smart, they can act smart but they may not actually be smart. He is really smart and by the end of that meeting I knew he was right for Nathan. And so I got this growing sense of anxiety through the meeting.  You start to think, “What if I don’t get him?”  I know that there are three other movies trying to get him.

And then you get this crazy thing where you get to know this young man, he’s intelligent, he’s quite slim and he is articulate, he’s quite delicate, he is a guitar player and he says, “I’ll be there in 21/2 months.” and you think, “Yeah, we’ve got this slim young guy,” and he turns up, he’s like a bull, and I don’t know how he did it. And then you get used to this other person because Oscar, the guy you knew, vanished. You can’t find him anymore, he is gone. And instead, there is this powerful muscular, testosterone-driven alpha male and he dominates everything.  Often working with him on set was like being in theater where you are watching a performance and I would lose track of all the things I should be watching because I’m completely locked into his performance. Just exactly like being at the theatre with terrific actor on stage.  It is incredibly seductive and so you totally forget to say, “Cut.” And I really mean that, it’s not just a set of words that people say. But eventually you get used to it, then the film ends. And you meet Oscar three months later. He was over actually for the premiere of “Inside Llewyn Davis” where he was a completely different person and the bull is gone and the slender young guitar player guy is back again. Everything I just said vanishes. He vanishes part by part.

I didn’t recognize him at first in the trailer, with the shaved head and beard and the thick, muscular body.

It was a result of collaboration and conversation. I liked the idea that Nathan had a beard for various reasons partly because I’ve always being told in previous films when I would write a character with a beard that the studios hate beards, they used to hate beards because it kills international sales or some stupid reason like that. So I knew he had a beard and I knew that I wanted him to be physically powerful because he is a bully on an intellectual level and the implicit violence in him.  Oscar arrived with a whole bunch of other things.  One thing that Oscar felt that he needed was glasses.  It was quite interesting, when he didn’t have classes he looked like a thug but when he wore glasses he was at least an intelligent thug.  Somehow we’re taught that glasses make you look smart and it does kind of work. And eventually we settled on the shaved head and beard and he had the muscle mass and the glasses. And then the final thing he did which was really lovely and strange was his Bronx accent which he got from Kubrick because he loved the juxtaposition.  Kubrick was is obviously an intelligent man who has this owlish look which Oscar often does if you watch his performance. He has this sort of owlish raised eyebrow look but this Bronx accent that is slightly incongruous.

Tell me about your location — that spectacular Juvet Hotel in Norway.

There’s something that is slightly kind of obscene in a way about this because to say it’s a low-budget film when it’s $15 million, which is obviously a massive amount of money, but in the world of film-making it’s turns out to be a small amount of money. So then what do you got, you’re telling a story about a guy owns the biggest tech company in the world, as rich as anything you can imagine with a property which needs to reflect his level of wealth.  How does a low budget film create endless wealth?  It is a sort of paradox.  We found this beautiful spot in Norway. It wasn’t the just the architecture; it was also the landscape. Some of the mountain landscape was sort of chocolate boxy, a bit like Ansel Adams, too beautiful, too perfect.  Norway had a kind of brutal bleak sort of aspect and  these big powerful skies and these mountains that could kill you really and not care, with powerful sort of glaciers and rivers and stuff like that.

What do you see as the significance of the Turing test?

The Turing test is perceived as test of sentience but it is not, it is a language test. It’s a test to see if you can pass the Turing test.

Nathan does not abide by Asimov’s rules preventing robots from hurting a human.

He’s very Darwinian about it.

He is very Darwinian and actually that was a very important aspect of this, that they are actually part of us, a continuation of us. We tend to see them as parallel.  Either they get presented as a rival species or as a creation is like Frankenstein, semi-religious, where it is not your place to mess with God’s work. I was just trying to present it as a parental thing, the creation of a new consciousness, which is what parents do. And also those consciousnesses do rebel from us and do move on and actually what we ask of them is that they live longer than we do and have better lives.  Always for me when she turns around and says to Nathan, “What is it like to have made something that hates you?” — it’s an adolescence.

Marvel/Disney — Where are the Natasha Dolls?

Jenna Busch and the wonderful folks of Legion of Leia and Heroic Girls are asking an important question: #wheresnatasha?

Remember last year when the #WheresGamora hashtag called out the lack of Gamora toys in the Guardians of the Galaxy toy line? Well, it’s happening again. Natasha Romanov, the Black Widow (Scarlett Johansson) is a huge part of the Avengers team and one of the only women in the Marvel films. At the moment, she’s also the only female Avenger. With Marvel’s Avengers: Age of Ultron coming out, you’d think we’d get to throw our money at them and walk home with a Black Widow toy. However, of the 60 products that Marvel and Disney have out for the film, only three feature Black Widow. Not exactly a great percentage. If you’re a Natasha fan, you can head to Target and purchase a tote bag, a men’s t-shirt and a figure that’s part of a LEGO set.

Dudes. Black Widow is awesome. She is every bit as much of a superhero as the other Avengers. Girls want to buy her. And guess what, boys do, too. What were they thinking?

And for those of you who are looking for something more literary, “Far from the Madding Crowd” opens today as well, with Carey Mulligan as Thomas Hardy’s headstrong heroine wooed by three suitors.

Blockbusters are typically followed by comedies, so next week we will get two: “Hot Pursuit” with Reese Witherspoon and Sofia Vergara and “The D Train” with Jack Black and James Marsden, along with “Bravetown.”

A week later, George Clooney stars in “Tomorrowland” and Sam Rockwell and Rosemary DeWitt get terrified by the remake of “Poltergeist.”