I got a chance to preview the new American Writers Museum in Chicago before it opened on May 16, 2017. It is enchanting, inspiring, genuinely magical. There is a special room about children’s literature, with a glorious full-wall mural by my friend, Caldecott Award-winning illustrator Paul O. Zelinsky. There are some artifacts, including the legendary original manuscript of Jack Kerouac’s On the Road.

This month’s release of “Guardians of the Galaxy: Vol 2” inspired IndieWire to ask critics about their own favorite opening credit sequences and a couple mentioned “Catch Me if You Can” with Steven Spielberg’s tribute to Bass, designed by Kuntzel and Deygas and with an edgy John Williams score.

Other classics they mention include Rosie Perez dancing in the opening credits of “Do the Right Thing,” written and directed by Spike Lee.

A favorite of mine is from “Deliver Us from Eva.” It is a great introduction to the characters and mood of the piece, and as my readers know, I really like gloves! 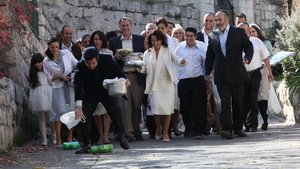 Israel’s biggest box-office hit of 2016, “The Women’s Balcony,” is a warm-hearted film about a close-knit Orthodox community living in blissful harmony until their synagogue literally collapses in the middle of a bar mitzvah. The rabbi’s wife is critically injured and the rabbi becomes depressed and foggy-minded. The men of the congregation are grateful when a charismatic rabbinical student known as Rabbi David (Avraham Aviv Alush), offers to help, bringing along his friends to conduct services and raise money to rebuild the temple. But he proves to be a very divisive figure when he urges the congregation to become more strictly observant, suggesting the men give their wives headscarves to cover their hair. The showdown comes when he tells the women that rebuilding the balcony, where the women sit separate from the men during services, will have to come after the creation of a new torah scroll. The women do not agree.

The details of the setting are fascinating, and while unfamiliar to many in American audiences, the elements of an Orthodox Jewish life are presented in a comfortable, respectful, natural manner. The film is immensely charming in its depiction of the quiet, gentle humanity of the community and the way their commitment to Judaism is reflected in every aspect of their lives. Evelin Hagoel is a stand-out as Etie, a grandmother who leads the rebellion and Yafit Asulin is radiant as a shy young woman who finds love. This is an endearing comedy with some thoughtful insights about the way we find and keep finding the sustaining force of grace in our lives.

“Max 2: White House Hero” star Francesca Capaldi has a very extensive resume for someone born in 2004, including three seasons on the popular series “Dog with a Blog” and the voice of the little red-haired girl in “The Charlie Brown Movie.” It was a lot of fun to talk to the charming and remarkably bright and poised young actress about her newest project, Max 2: White House Hero, available on DVD/Blu-Ray and streaming May 23, 2017. I have a copy to give away! Send me an email at moviemom@moviemom.com with Max in the subject line and tell me your favorite pet’s name. Don’t forget your address! (US addresses only.) I’ll pick a winner at random on May 31, 2017.

“Okay, so the movie is basically the Russian President and his daughter come to America for talks with the US President,” she told me. “I play Alex, the daughter, and I meet the first son, TJ, who is played by Zane Austin, and his dog Max, who is a Marine dog but he stays with TJ. We kind of get into some trouble and we kind of get in some mischief. We go to a party, I went in the water on this raft, and it’s because someone is trying to sabotage these talks between Russia and the US.”

She was experienced in working with dogs before, from “Dog with a Blog.” “The most important thing to know is probably that they are not typical dogs and they’re not pets either. They’re workers. They are like actors but they’re just not humans and they are so well trained and they know so much that it’s crazy. You just have to remember they are working, kind of like service dogs, you can’t really go around playing with them.” There were actually four dogs playing the part of Max, each with different specialties. “They all had different abilities. They have different strong suits and we got to spend time with all of them before we filmed so that they are comfortable with us and there’s a better emotional connection when we’re filming. One could jump really, really well, one was a runner, one was like the face for the dogs. He’s on the posters and stuff like that. So, they all have different things they do and I thought was really cool.”

Francesca describes her character as “really excited to see what’s going to happen and I think she had a great time visiting America. And she’s a really fun character to play especially since I never did a Russian accent before. It was really cool to try something new with that. And she is a little precocious, she is a little funky and she was really fun to play.” She loves doing accents and developed this one by watching YouTube videos and working with her dad, who speaks a lot of languages. “Russians have a really distinct accent. Instead of ‘will’ they say ‘vill.’ I actually got to say some things in Russian and I’ve never spoken Russian I barely even heard it been spoken before so it was really fun. It was a little bit difficult because it’s not like anything I ever heard.”

She also had her first opportunity to do stunts, which she enjoyed very much. “I had to do a scene where I was kidnapped, where I was thrown into a van and I head butted someone and I was in this river. It was so cold I had to wear a dry suit, it was freezing and I remember the medic that was on set was saying, ‘Yes, keep your toes moving or there’s not going to be any circulation and we’re going to have to amputate them,’ and I was like ‘Oh, okay, yes, I’ll keep my toes moving.’ So it was just so cold but I loved it. I thought it was so much fun.”

Francesca has been performing since she was a baby and says, “I just love acting so much, it’s crazy.” She keeps in mind advice she got from the late Don Rickles. “He said to me, ‘Don’t let anyone ever discourage you. Stay confident, no matter what. Stay strong.’ He just gave me the best advice about the business and how to stay true to yourself.” 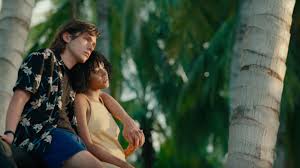 “Everything, Everything,” based on the novel by Nicola Yoon, is an updated fairy tale about a princess trapped in a castle and the prince who does not exactly rescue her but gives her a reason to rescue herself.

It’s not an enchantment or a curse that keeps her inside. It’s an illness that means any exposure to bacteria or a virus could be fatal. Maddy (Amandla Stenberg, Rue in “The Hunger Games”) cannot remember a time when she was allowed to be outdoors.

Diagnosed at 2 with the immune deficiency SCID, Maddy lives in an irradiated and sterile environment. She has never left her home and has never met anyone other than her doctor mother (Anika Noni Rose), her nurse Carla (Ana de la Reguera), and Carla’s daughter Rosa (Danube R. Hermosillo). She has books, she has an exercise machine, she has 100 identical white t-shirts, and she has an online SCID support group. She and her mother watch movies and play phonetic scrabble. Maddy studies architecture and builds model rooms, placing the figure of an astronaut in each one. This avatar is her opposite. Her world is measured in square feet; the astronaut’s is unlimited.

Maddy stands at the floor-to-ceiling window overlooking the backyard and imagines what it would feel like to stand on grass or feel a breeze of unfiltered air. And she has a seat in the corner of her bedroom overlooking the house next door, which is how she peers down at a new family moving in, a new family with a boy who has a beautiful smile. He is Olly (Nick Robinson of “Kings of Summer”). He draws his phone number on his window opposite her bedroom, and soon they are texting each other, sweetly portrayed as a face-to-face conversation at a table in Maddy’s model diner, with the astronaut looking on. She wears white; he wears black. She says, “When I talk to him, I feel like I’m outside.” But when she talks to him, she wants to go outside. And both of them find their worlds getting less black and white.

The elements of a young teen romantic fantasy are all here, primarily the disapproving parent, the utterly devoted and hunky but not too aggressive young male, adoring and supportive, and the big reason that they cannot get too physical, except maybe one perfect time. In “Twilight,” he was a vampire who could lose control and kill her. Here it’s just his normal human germs. Anyone over the age of 15 may be distracted by impracticalities and plot developments that go from improbable to preposterous, but even people who know that you have to have ID to get on an airplane and money to pay a credit card bill might just enjoy the pleasures of watching Maddy wake up to the world and Olly, through her, wake up to a few of his own.

Parents should know that this film includes risky teen behavior, some strong language, serious illness, and a non-explicit sexual situation.

Family discussion: Did Carla make the right decision? Why does Maddy put an astronaut in her model rooms?

If you like this, try: “My Sister’s Keeper,” “Before I Fall” and “The Fault in Our Stars”