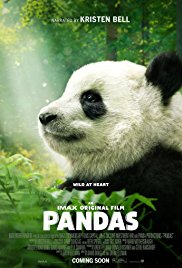 Pandas are, as someone notes in the adorable new IMAX documentary simply called “Pandas,” “the King Kong of cuteness.” Kristen Bell narrates the story of an ambitious and daunting Chinese project, to take panda babies bred in captivity and release them into the wild, to repopulate the endangered species. The Chinese panda specialists consult with an American from New Hampshire who has a similar program for bears. And we get to watch as a panda named Qian Qian leaves the only home she has ever known. I spoke to director Drew Fellman and American panda expert Jacob Owens, who worked with Qian Qian and appears in the film.

Why are humans so drawn to pandas?

Fellman: I know, it’s a mystery, isn’t it? There is so much about that that really is so unknown, part of it I think is that pandas are still so new to us. Pandas were unknown to the West until about the 1860’s and the first panda showed up in the U.S. in 1920. Once people were introduced to pandas there has been a panda mania of some sort. From the very beginning they just captured the public imagination and I think part of that was because they seemingly came out of nowhere and they’re so big and so adorable and they look so unlike any other animal. The physical answer as to why they’re so adorable is because they have the strongest jaws you can imagine so they can bite through solid bamboo and that gives them these huge jaw muscles which give them a big round head like a giant baby.

Owens: Yes, babies are cute because they have big eyes and they have round heads, they’ve got disproportionate ears; and so you look at the pandas and it’s got big black spots that look like big eyes and big ears and a big round head, also they roll around more than any other animal I’ve ever seen. They love rolling. So not only do they do look really cute, they’re also really silly goofy animals.

In the film you say that the three qualities you were looking for in finding the right panda for the release program were courage, curiosity, and climbing ability. Why were those were the key skills and how do you look for them?

Owens: There is a lot of research that goes into this that we can draw from. It starts off with genetics and health; we want healthy individuals who have the right genetics for the places that we’re looking to release them. The next thing is looking at the behavior. We introduce novel stimuli to see how they respond. If an individual panda sees something new and instantly runs towards it that’s not necessarily the quality we need because we want them to be curious but also careful but you also don’t them to be so wary of everything that they won’t explore. They’ll need to explore their habitat, being able to find food on their own; things like this, so having in moderation being exploratory but also being cautious, being really vigilant; vigilance is a big thing always looking out for new dangers, those are the key features. And they have to climb well because they have to spend a lot of time in trees. They flee predators up trees and so being able to walk around and climb and do that well at a young age is a good indicator.

Did it feel like leaving a child at school to say goodbye that way?

Owens: Yeah, worse. As scientists you try not to get attached to the animals that you’re studying but this is very different than just strict science; this is reintroduction and release of individual animals and so we are doing all this research but then you’re also dealing with an individual and their own personality that’s unique and so you can’t help but personify and you can’t help but get very attached. You really care about them as an individual and also what they represent for the species. As a conservation biologist, I’m focused on making sure that there are individuals of species in the future. But at the same time just like anybody else, just like if you have a human child you want them to go off on their own and be able to be successful. It’s just that how you prepare them is a bit different. I don’t ever refer to it as training because I can’t train a panda to be a panda because I’m not one. So I call it conditioning or preparing, letting their natural instincts come out progressively through increasingly wild conditions and eventually to the point when they are ready to go out. We open the gate and she can make that decision when she wants to go out and when she wants to come back and, when she’s ready, just to be out fully.

What was the most important thing that the project learned from Ben Kilham, the man who has been raising bear cubs and releasing them successfully in New Hampshire?

Owens: Ben has been doing black bear rehabilitation for more than 20 years and so he’s just got a huge amount of knowledge about bears in general and pandas are bears. They are very different bears but they’re still bears. He also knows so much about rehabilitating and releasing animals. I’ve worked on reintroduction programs before with different species. People think that you should avoid all human interactions. Ben takes the opposite approach. He says there’s no real way to do that because these black bears don’t have a mom so you have to hand raise these cubs and you have to give them a safe environment to progress into the wild. Our pandas are born in captive care. Their mothers are also captive-born individuals so they don’t have the wild skills to teach their cubs. So for Ben the biggest thing is that human interaction has a real advantage, because once they trust you that provides us the access to keep on learning more about their biology, to keep on learning more about their conservation and also monitor them. I can change Qian Qian’s GPS collar just as Ben can with Squirty as you see in the film, and that’s a huge advantage because we can monitor her, we can follow her, we can see where she’s at, see how she’s doing. As technology increases we can do a lot more with that technology but if you don’t have access to them and they don’t trust you, then you’ll have to take other measures. You have to capture them in some kind of trap or use sedation and so because they know and trust us it’s a lot easier for us to do those things. Using those human interactions for those advantages is the biggest thing that I have learned from Ben in terms of our project.

Fellman: Also from the panda’s point of view is the positive interaction with the humans as opposed to being trapped or tranquilized which can be dangerous and can frighten them.

Owens: There is also the misconception that I had coming into this that if a panda or black bear gets used to one individual or a handful of individuals then they’re used to people and then they’re going to be a nuisance animal then there’s going to be a real problem and they’re not going to do well when they go out. But pandas and black bears are really smart and they can identify individual people very easily by the sound of their voice, by the smell and also by vision somewhat when you get close. It was a big learning thing for me to learn that we were wrong in thinking that this risk of them trusting a few human individuals is going to lead to touching every human. My dogs don’t do that in the States and most people’s dogs don’t do that in the States. Most animals just don’t do that.

What’s the most important thing that you want families to learn about pandas when they watch this movie?

Owens: I want people, especially families with young kids, that people around the world can work together really successfully and use their own combined strengths to work on an endeavor that’s really challenging. We’re really dedicated and I think that’s the big point — all of us globally working together to achieve a difficult goal.

Fellman: And another important message is that pandas are much more than just adorable animals; they are very smart, occasionally fierce, a bear with a mind of their own and they’re all individuals. It’s going to take a lot to create a better future for them and it’s something that’s really worth fighting for.