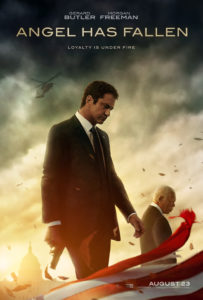 To recap: first the White House was attacked. Not White House Down — that was PG-13 with Channing Tatum and Jamie Foxx. I’m speaking of Olympus Has Fallen, rated R, with Gerard Butler as Mike Banning and Morgan Freeman as Secretary of Defense Allan Trumbull. And then it went international with London Has Fallen, with all of the world leaders as targets when they are in England to attend a funeral. Then there was Hunter Killer, but that was about a submarine commander, not a Secret Service agent. Still, it was a fate-of-the-world shoot-em-up, so we’ll include it as an affiliate member of the GBU (Gerard Butler Universe).

That brings us to chapter three of the Banning/Trumbull saga, and, as they like to say in movie trailers, this time it’s personal. “Angel Has Fallen” is about another attack on the President. But this time what, or I should say, who has fallen is Banning himself. Trumbull has gone from Defense Secretary to Vice President, and now President, and Banning is up for the job of head of the Secret Service. But he has two reasons to be reluctant to accept. First, he is feeling the effect of his concussions and other injuries and is popping a lot of pain pills. Second, he dreads the thought of a desk job. The action is what makes him feel alive.

On a fishing trip, the President is attacked — a stunning scene featuring drones swarming together like demonic birds via artificial intelligence and facial recognition. Banning, who had asked to be relieved because his headache was overpowering, returns just in time to rescue Trumbull, but everyone else on the detail is killed. Banning has been framed; there is a deposit of $10 million from Russia in his bank account. An FBI agent (Jada Pinkett Smith) is after him. Banning is Angel and he has fallen. He has to go on the run, off the grid, to find out what is happening, clear his name, and still keep the President safe.

And so we get to find out something about Banning’s past, and about the way intense, adrenaline-pumping peril can become addicting. I’ve had a problem in the past with the careless collateral damage in this series, and that continues to be a problem. Even a mindless popcorn action movie where the “surprise” bad guys are instantly recognizable has to be careful about staying within the parameters of fun chases and shoot-em-ups and explosions, not too heavy on the carnage. That is an even bigger issue this time, as Banning’s character and struggles are a part of the storyline. Making him a character with more dimensions, maybe one and a half or two but not three, just means more of an adjustment every time we swing into one of the big stunt extravaganzas. Is it all the excitement that has Banning no longer needing to chomp down pain pills all the time? It might have been more intriguing to see him try to outsmart and out-fight the bad guys with some uncertainty around his coping with past injuries, but the story pretty much jettisons all of that as soon as the action starts. The different think and feel levels are disconcerting, especially in one scene that got a lot of laughs in the theater but involves many people getting blown up.

Director Ric Roman Waugh is a former stunt man and stunt coordinator and his staging of the intense scenes of conflict and action is assured and exciting. In addition to the drone attack (filmed by drone cameras), the battle in a building during the movie’s climax is pure testosteronic cinema. I don’t think we’ve seen the last of Mike Banning — the only question is what or who will be the next to fall.

Parents should know that this is an extremely violent film with intense and graphic peril and violence, with many characters injured and killed, guns, drones, explosions, disturbing images.

Family discussion: How are Wade and Mike and Mike’s dad alike? What does “lions” mean to them? Should Mike take the director job?

If you like this, try: the other “Fallen” movies, “Hunter/Killer” and the “Taken” series