Free For Mother’s Day! My Book About the Best Movie Mothers 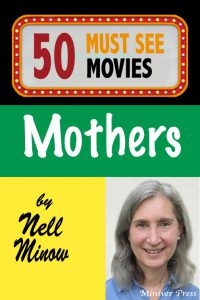 No relationship is more primal, more fraught, more influential, more worried over, more nurturing when good and more devastating when bad than our connection to our mothers. The first eyes to look at us with love, the first arms to hold us, Mom is the one who first keeps us fed and warm, who applauds our initial steps, kisses our scrapes, and takes our temperature by kissing our forehead. She’s also the one who keeps people in endless years of psychoanalysis. Mothers inspire movies in every category, from comedy to romance to drama to crime to animation to horror, from the lowest-budget indie to the biggest-budget prestige film.

And there are those very special souls who remind us that motherhood doesn’t require a biological connection. Stepmothers and adoptive mothers are as vitally important on screen as they are in the lives of those lucky enough to be raised by them.

“A boy’s best friend is his mother,” says a character whose mother is central to the story even though she never appears in the film. (Spoiler alert: The quote comes from Norman Bates in “Psycho.”) In “Stop or My Mom Will Shoot,” tough guy Sylvester Stallone plays a cop who mother comes along on his investigation whether he wants her to or not. In “Oedipus Wrecks,” one of three short films that make up the compilation New York Stories, Woody Allen plays a lawyer whose mother finds the ultimate way to embarrass him. And don’t get me started on Jason’s mother in the Friday the 13th movies.

I have selected 50 of my favorite movie mothers, from films as varied as The Sound of Music and Little Women along with forgotten or overlooked films like Stella Dallas, Claudia and David, and Dear Frankie. Actresses like Anne Revere and Spring Byington made careers out of wonderful performances as mothers, and I have included some of their best. I have a special affection for films and performances based on real-life mothers, especially those based on the mothers of the writers who told their stories, like Sally Field’s Oscar-winning performance in Places in the Heart. But each of the mothers in these movies is inspired by the unique joys and frustrations of the woman we love first.

A lot of women have been nominated for Oscars for playing mothers and just about every actress over age 20 has appeared as a mother in at least one movie. From beloved Marmee in “Little Women” and Mrs. Brown in “National Velvet” to mean moms in “Now Voyager” and “Mommie Dearest.”  Oscar-winnng classics and neglected gems, based on real-life like Sally Fields in “Places in the Heart” or fantasy like Dumbo’s lullabye-singing elephant mom, biological mothers like Irene Dunne in “I Remember Mama” or step-mothers like Maria in “The Sound of Music,” these are all must-see movies.