Happy Mother’s Day! Some of My Favorite Movie Mothers 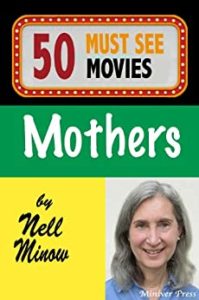 Some of the movies featured in my book, 50 Must-See Movies: Mothers

Claudia Before they went on to co-star in the luminous romance, “The Enchanted Cottage,” Dorothy McGuire and Robert Young played a young married couple in this sweet neglected gem based on the books by Rose Franken.  Claudia and David love each other very much and he finds her innocence very appealing.  But her immaturity leads to many problems.  A neighbor thinks Claudia is flirting with him and without consulting David she impulsively decides to sell their farm.  And she is very dependent on the loving mother she adores but takes for granted.  Claudia’s is about to face two of life’s most demanding challenges – her mother is dying and Claudia and David are going to become parents themselves.  So Claudia’s mother has to find a way to help Claudia grow up.  Watch for: a rare film appearance by the exquisite Broadway star Ina Claire as Claudia’s mother

Guess Who’s Coming for Dinner There are two great mothers in this talky, dated, but still endearing “issue movie” about inter-racial marriage from 1967.  Katharine Hepburn’s real-life niece Katharine Houghton plays her daughter and what Houghton lacks in screen presence and acting experience is less important than the genuine connection and palpable affection between the two of them.  The question may seem quaint now, but as filming was underway, inter-racial marriage was still illegal in 17 states.  The Supreme Court ruled those laws unconstitutional that same year.  Hepburn is electrifying in what she knew would be her final film with her most frequent co-star and real-life great love, Spencer Tracy.  And the distinguished actress Beah Richards is brilliant as the mother of a son who says his father thinks of himself as a “colored man,” while he just thinks of himself as a man.  Watch for: Hepburn’s expression as her daughter describes falling in love

Claudine Diahann Carroll was nominated for an Oscar for her performance as a single mother in this ground-breaking 1974 film, one of the first to portray a domestic employee as a real person with her own home and family, and one of the first to provide an honest look at the perverse incentives of the “Great Society” welfare programs.  Claudine is the mother of six who has to keep her work as a housekeeper and her relationship with a genial garbage worker (James Earl Jones) a secret from the social worker because they put at risk the payments she needs for her children.  Watch for: the very romantic bathtub scene

Dear Frankie Emily Mortimer plays Lizzie, the divorced mother of a young deaf son in this heartwarming story set in Scotland.  She is devoted and very protective.  She does not want him to know the truth about his abusive father (the source of his deafness), so she tells him that his father is a merchant seaman.  The letters he receives from all the ports of call full of details about all the places he has been are really written by Lizzie. When the ship comes to their town, she has to find someone to pretend to be his father.  Watch for: Lizzie’s explanation of the reason she writes to Frankie —  “because it’s the only way I can hear his voice”

Imitation of Life This melodrama about two single mothers, one white and one black, who join forces has been filmed twice and both are worth seeing.  The best remembered is the glossy, glamorous 1959 version with Lana Turner and Juanita Moore.  Lora (Turner) and Annie (Moore) are brought together by their daughters, who meet at Coney Island.  Lora, a struggling actress, needs someone to help look after her daughter and Annie needs a job and a place to live.  Annie moves in to be the housekeeper/nanny.  She and Lora have a strong, supportive friendship, though Lora and both girls take Annie for granted.  As the girls grow up, Lora’s daughter is resentful of the time her mother spends on her career and Annie’s daughter resents the racism she confronts even though her skin is so light she can pass for white.  Watch for: the most elaborate funeral scene ever put on film, with a sobbing apology from Annie’s daughter (Susan Kohner)

Please Don’t Eat the Daisies Doris Day stars in this film loosely based on Jean Kerr’s hilarious essays about life as Kate, the wife of a theater critic (David Niven) and mother of four rambunctious boys.  While most of the film’s focus is on the marital strains caused by her husband’s new job and the family’s new home, the scenes of Kate’s interactions with her children are among the highlights.  It is clear that while she tries to be understated about her affection and sometimes frustration, she adores them.  Watch for: Kate’s affectionate interactions with her own mother, played by Spring Byington