Some movies for President’s Day: 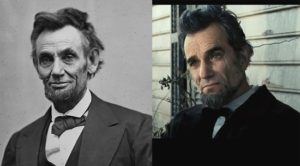 Celebrate President’s Day with some movies about our 16th President. Reportedly, Abraham Lincoln has been portrayed more on screen than any other real-life character.  I was honored to be invited to participate in the 272-word project from the Abraham Lincoln Library in Springfield, Illinois.  Each of us was asked to contribute an essay that was, like the Gettysburg Address, just 272 words.

Two score and six years after the death of Abraham Lincoln, he was first portrayed in the brand-new medium of film. 102 years and over 300 films later, Lincoln has appeared on screen more than any other historical figure and more than any other character except for Sherlock Holmes. In 2013 alone there were three feature films about Abraham Lincoln, one with an Oscar-winning performance by Daniel Day-Lewis, directed by Steven Spielberg. In another one, he was a vampire slayer. He has been portrayed by Henry Fonda (John Ford’s “Young Mr. Lincoln,” Raymond Massey (“Abe Lincoln in Illinois”), Walter Huston (D.W. Griffith’s “Abraham Lincoln”), and Bing Crosby – in blackface (“Holiday Inn”). The movies have shown us Lincoln defending clients, mourning Ann Rutledge, courting Mary Todd, and serving as President. We have also seen him traveling through time with a couple of California teenagers in “Bill and Ted’s Excellent Adventure” and granting amnesty to Shirley Temple’s Confederate family in “The Littlest Rebel.”

Lincoln is appealingly iconic as a movie character, instantly recognizable as a symbol of America’s most cherished notion of ourselves: unpretentious but aspiring for a better world and able to find both the humor and integrity in troubled times. In every film appearance, even the silliest and most outlandish, he reminds us, as he did in The Gettysburg Address, of what is most essential in the American character: the search for justice.

, based on Team of Rivals: The Political Genius of Abraham Lincoln by Doris Kearns Goodwin, with Oscar-winner Daniel Day-Lewis.

Young Mr. Lincoln Directed by John Ford and starring Henry Fonda, this is an appealing look at Lincoln’s early law practice and his tragic romance with Ann Rutledge. Particularly exciting and moving are the scenes in the courtroom as Lincoln defends two brothers charged with murder. Both have refused to talk about what happened, each thinking he is protecting the other, and Lincoln has to find a way to prove their innocence.

Abe Lincoln in Illinois Raymond Massey in his signature role plays Lincoln from his days as a rail-splitter to his law practice and his debates with Stephen Douglas. Ruth Gordon plays his wife, Mary.

Sandburg’s Lincoln Hal Holbrook plays Lincoln in this miniseries based on the biography by poet Carl Sandberg.

It’s not that I’m forgetting the other President we pay tribute to this week; it’s just that George Washington has never had a movie worthy of his contributions to our country. Lincoln has had films from directors like John Ford and Steven Spielberg. Washington has television. There’s a 1984 miniseries:

And a History Channel miniseries:

Related Tags:
Based on a true story Epic/Historical