The New Yorker has created a section with some of its best profiles of actresses, including Angela Bassett, Julia Roberts, Diane Keaton, Tilda Swinton, and Katharine Hepburn. They are a treat to read and will inspire you to check out or revisit some of their classic performances.

Anthony Lane on Julia Roberts in 2001: “The essence of Julia Roberts’s appeal is that she is more lovable than desirable, and that, even when love is off the menu, she cannot not be liked. There is no more flattering illusion in movies: here is a goddess, and she wants to be your friend.”

Claudia Roth Pierpont on Katharine Hepburn in 2003: “With her starved, whippetlike grace and overbearing intensity, Katharine Hepburn appeared slightly mad. But the same characteristics also made her seem a distinctly new type of woman, poised between the nervy and the nervously overwrought.”

Hilton Als on Angela Bassett in 1996: “While she has yet to account for a film’s financial success, her dignified, alert, and earnestly emotive screen presence does generate audience sympathy. And she appeals especially to that segment of the moviegoing public (black women, white housewives, lesbians, and married men) who are not just fetishizing her striking upper-body musculature but are responding to the subtext of her performances—a subtext that includes her struggle to reinvent Hollywood’s view of black women as something other than wisecracking or doleful martyrs, their hair stiff with brilliantine and the funk of subjugation.”

, a coming-of-age tale based on the best-selling novel by David Baldacci, who also wrote the screenplay. Foy plays 12-year-old Louisa, who moves with her brother from New York City to live with their grandmother in Virginia. A coal company tries to steal their land and Louisa finds herself having to fight for their land, home and future. It will be available on DVD and VOD June 2, 2015. 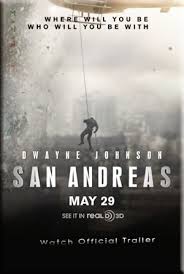 This time, it’s an earthquake. Before the tectonic plates start to shift, we get quick intros to our two heroes, the brain (Paul Giamatti as Lawrence, a Caltech seismologist) and brawn (Dwayne “The Rock” Johnson as Ray, a military rescue specialist turned LA Fire Department rescue specialist). This job is easier, because “no one is shooting at us.”

These scenes give the professor a chance to lecture his class and establish the scale of damage a quake inflicts and the impossibility of predicting when one will occur (until….). And it gives Ray a chance to rescue a pretty girl whose car has been knocked off a cliff, accompanied by a TV news reporter (“The Good Wife’s” Archie Panjabi) and cameraman. This is also the only clever twist in the film as the pretty girl is speeding along a narrow mountain road, reaching behind her for her water bottle and checking a text, either of which we assume are going to cause an accident. But this is not a Driver’s Ed cautionary video. Her car is knocked off the mountain by boulders, crushing it and wedging it precariously between rocks on the side of the cliff.

Fortunately, Ray and his wisecracking crew arrive to save the day, explaining what they are doing to the reporter so we can power through some more exposition and see the reporter’s notes on one of the team: “Cute but not smart.” Yep. That prepares us for what is coming all right. Except it’s not that cute. Example: two characters crash land in a baseball field and she says to him: “It’s been a while since I got you to second base!” How hilarious and quippily romantic in the midst of the entire state falling into the ocean!

We quickly establish Ray as a devoted father and estranged husband. Final divorce papers arrive in the mail and his ex, Emma (Carla Gugino — please get a better agent) is moving in with Richie Rich, I mean Daniel (Ioan Gruffudd), who has a mansion and a private plane and says that the skyscrapers he builds are his children. To sharpen Ray’s sense of being displaced, Daniel offers to fly Ray’s daughter Blake to her volleyball tournament in San Francisco, instead of driving with her dad.

As if to manifest Ray’s internal upheavals, the earth begins to shake, first in Nevada, where the Hoover Dam collapses, and then on the West Coast, when the fault line of the title, overdue for a major quake after more than a century, seizes, shifts, and heaves.

The special effects are so extensive that it amplifies their unreality. The movie is more concerned with the individual windows exploding out of the buildings than it is about the underlying mechanics of what is actually happening. It is preposterous enough that the professor not only predicts the second quake but hacks into the television networks. Wi-fi, electricity and broadcast channels are still operating, apparently, which is a long shot, but also people are actually watching the television news to find out what is happening, which is even more unlikely. And then, odds fast plummeting below zero, San Francisco is evacuated in a pretty orderly fashion (some folks stopping to loot flat-screens — why it it always flat-screens?), presumably so we can relish all the destruction without worrying too much about the people, the opposite of the neutron bomb. This is PG-13 “action violence,” designed to be exciting, not terrifying.

Goodbye, Golden Gate Bridge, cables swinging vertiginously. Goodbye Coit Tower. All those pretty pixels and algorithms, so cleverly arranged. California is shredded with the same glee the boys who played at our house used to have in wiping out the Sims with every possible kind of catastrophe.

What is terrifying is the Randian twist that has Ray abandoning any duties he has in LA to rescue just two people, both of whom are in his family. And in the middle of Armageddon, he somehow finds time for a heart-to-heart with his ex, after the scales drop from her eyes to understand what a selfish monster Daniel is. For all the literal flag-waving and reference to rebuilding at the end, this is a curiously sour portrayal of disaster as family therapy.

Parents should know that this film concerns a major earthquake affecting Nevada and California, with many collapsing buildings, roads, and bridges, fires, floods, looting, fighting, gun, characters injured and killed, references to death of a child, some disturbing images, and some strong language.

Family discussion: What does this movie teach us about skills and plans we should have for emergencies? What did Emma and Ray learn about one another and why did it take an earthquake for them to reach that understanding?

If you like this, try: “The Towering Inferno” and “The War of the Worlds” 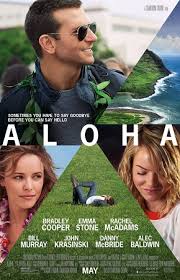 Writer/director Cameron Crowe presents us with an attractive and talented but messy and compromised hero in “Aloha,” and asks us to root for him. The problem is that the film itself is attractive, talent-filled, messy, and compromised, and harder to root for than the hero of the story.

That hero is Brian Gilcrest (Bradley Cooper), once an 11-year-old who loved the sky so much he wanted to identify everything in it. In a quick narrated recap that opens the film we learn that after he grew up things went well for him (in the military) and then not so well, and then badly. While working for a private contractor in Kabul, he was badly injured, and apparently not in the way that gets you a Purple Heart.

Brian arrives in Hawaii and needs to prove himself. His former employer, Carson Welch (Bill Murray) is one of the wealthiest men in the world, presiding over a telecommunications empire. He and the Air Force are working together on a big project that involves the development of land on the island that was a burial ground for the indigenous people. The Air Force assigns a “fast burner” named Sergeant Ng (Emma Stone) to work with get the cooperation of the King of the native population to build on that property, and to show that by performing a blessing ceremony. The King is played by real-life King Dennis “Bumpy” Kanahele, and he is one of the few from Brian’s past who seems to like him much. Welch does not. The Air Force General (Alec Baldwin, volcanically angry) does not. Then there is Brian’s ex-girlfriend, Tracy (Rachel McAdams), now married to an Air Force pilot and the mother of two children.

It totally goes off the rails several times, with a plot that would daunt a Bond villain thwarted by a completely ridiculous hacking scene, plus a last-minute redemptive reconciliation that is so far off the mark of any known human response the characters would be just as likely to sprout feathers and levitate off the ground. While the Hawaiian natives and their struggle against what they see as American imperialism and colonialism are sympathetically portrayed, it is still a story that is about white people and their problems. And the casting of Emma Stone as bi-racial is insensitive at best.

But like its hero and its writer/director, it won me back with the crackle of its dialog and charm of its poetry, even in the hacking scene, and especially in a statement of romantic intent that is one of the best I’ve seen in many months. It is also very funny, with a wonderfully expressive performance from Krasinski as the taciturn Woody, and thoughtful work from Cooper, who keeps getting better at finding moments of surprising insight and nuance with every performance.

Parents should know that this film includes strong language, sexual references and non-explicit situation, paternity issue, references to war-related violence and injuries and to weapons of mass destruction, references to imperialism and colonialism, and alcohol.

Family discussion: Why did Ng talk so much about being one-quarter Hawaiian? Why was the King the only person from Brian’s past who seemed to like him? What happens when billionaires make decisions that used to be made by government?

If you like this, try: “The Descendants,” and “Almost Famous”

This is certainly turning out to be the year of the AI robot.  This one stars Daniel Brühl and this time the robot is a child named EVA.