Well, it’s been a year. Who could have imagined we’d be watching all the new movies at home this year? That there would have been so many delays? And so much more?

But there have been some silver linings in the clouds of 2020, even when it comes to movies. One has been the democratizing impact of putting everything from big-budget studio films to micro-budget indies on the same platforms, allowing some smaller films to attract more attention.

So here is my list (in alphabetical order) of the top 10 films of the year, with a long list of runners-up that are also outstanding. I’m posting a separate top ten documentaries soon.

“Mank” is a big, breathtakingly ambitious, multii-layered story of Herman Mankiewicz, the man who wrote the original screenplay for what many people consider the greatest film ever made, “Citizen Kane.” But it is very much in conversation with our era as much as it is with its own. 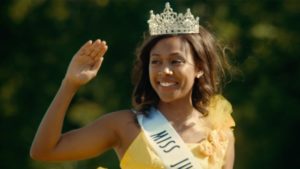 My favorite performance of the year is Nicole Beharie as Turquoise Jones, a one-time beauty determined to have her daughter make up for the opportunities she lost.

Newcomer Sidney Flanigan plays Autumn, a teenager who travels with her cousin Skylar (Talia Ryder) from Pennsylvania to New York because that is the only way Autumn can get an abortion without her mother and stepfather finding out. In an interview, director Eliza Hittman told me she wanted to “reclaim the narrative” on reproductive rights with a woman’s perspective. She tells the story with great tenderness, more protective of the two girls than the other characters are. Hittman’s intimate, documentary tone illuminates the girls’ vulnerability, their determination, and their resilience.

There are war stories that are about strategy and courage and triumph over evil that let us channel the heroism of the characters on screen. And then there are war stories that are all of that but also engage in the most visceral terms with questions of purpose and meaning that touch us all. “The Outpost,” based on the book by news correspondent Jake Tapper, is that rare film in the second category, an intimate, immersive drama from director Rod Lurie, a West Point graduate and Army veteran who knows this world inside out and brings us from the outside in.

The cleverest script of the year is a “Groundhog Day”-style story about three people caught in an infinite time loop. It is charming, romantic, funny, and very smart.

The Personal History of David Copperfield

There is no higher praise than to say that Armando Iannucci (“In the Loop,” “Veep”) has adapted the book Charles Dickens said was his favorite of all the novels he had written, the book closest to his own history, in a manner as jubilant and shrewdly observed, as touching, as romantic, as exciting, as the novel itself.

Pixar likes to take big swings, not just artistically but thematically. In “Soul,” Pixar has its first adult male (human) and its first Black lead character in Joe Gardner, voiced by Jamie Foxx. It has a less stylized look, set in a sepia-toned New York City. And it is about the most fundamental existential questions of all: Why am I me? What makes life meaningful?

The Trial of the Chicago 7

They say that history doesn’t repeat itself, but it rhymes. And that is how “The Trial of the Chicago 7,” based on events that occurred in 1968-69 and in development as a film more more than a decade, seems to have been made for exactly this moment of the fall of 2020.

Antigone: The eternal themes of Sophocles’ play are powerfully brought into a present-day story about immigrants in Canada, with a radiant performance by Nahéma Ricci.
The Assistant: Julia Garner plays the lowest-ranking employee of a powerful but never-seen producer in this searing story of just one day in a workplace run by a predator.
Banana Split: Two teen girls, the current and ex-girlfriend of the same boy, form an unexpected friendship.
Bill and Ted Face the Music: The third in the series about the lovable guys from San Dimas is lots of fun and, unlike its heroes, surprisingly wise.
Broken Hearts Gallery: The best romantic comedy of the year had one of the best ensemble casts of the year, refreshingly diverse, with a witty script and an adorable heroine.
Bull: With “The Photograph,” “Greyhound,” and this film about a one-time rodeo rider who grudgingly befriends a young girl, Rob Morgan was this year’s acting MVP.
Da Five Bloods: Spike Lee’s searing story about Black Vietnam vets returning to the country where they fought was broadly conceived and brilliantly performed, especially Delroy Lindo, and the late Chadwick Boseman.
Emma.: The latest version of the Jane Austen classic was deliciously sharp, with a terrific performance by “The Queen’s Gambit’s” Anya Taylor-Joy. And oh, the costumes!
The Forty Year Old Version: Radha Black’s autobiographically-inspired film about a struggling playwright is brimming with sharp but often understated humor and a deep experience of making art. “Don’t think just because you created something people will appreciate it,” she tells her students, but the unstated message is, “Don’t think just because people don’t appreciate you that you haven’t told a story worth telling.”
Hamilton: Lin-Manuel Miranda’s Broadway smash about one of America’s founding fathers was just the thing we needed for the 4th of July this year, and the original cast shows us they deserved every award they won.
Minari: This gentle autobiographical story of a Korean family who buy a farm in Arkansas is told with infinite tenderness and quiet humor.
The Old Guard: Gina Prince-Bythewood may be the most deeply, unabashedly romantic director working today, even in a superhero movie with breathtaking fight scenes. Her films are about profound connection and commitment. There is a moment in this film that will be in clip reels of the most true-hearted movie depictions of love forever.
One Night in Miami: The writing MVP this year is Kemp Powers, who wrote this film based on his award-winning play about the night four key figures of the 20th century: Muhammed Ali, Malcolm X, Sam Cooke, and Jim Brown spent talking to each other. He also co-wrote “Soul.”
Ordinary Love: A couple faces cancer in a story where the smallest details are thoughtfully observed and portrayed with sympathetic honesty.
The Photograph: From the steamy moments with a storm outside the window to an Al Green LP to flirtatious banter about the relative merits of Kendrick Lamar and Drake, the heavenly romanticism is captivating all the way to the last moment.
The Sound of Metal: We’re going to have to come up with a better term than POV to describe “Sound of Metal,” the story of a drummer who loses his hearing. POV describes a subjective portrayal, where we see just what the character sees instead of what an outsider can see. But “see” is the operative word. Much of “Sound of Metal” is subjective, so that the filmmakers let us hear only what Ruben (brilliantly played by Riz Ahmed) is hearing. Many of the sounds are muted or distorted. Some of the movie is in silence. Sometimes we get a brief chance to hear what he cannot.
Sylvie’s Love: The other great romance of the year is the story of a young woman who wants to work in television and a musician. What could have been soapy is told with such sincerity and tenderness is becomes anthemic.
The Vast of Night: Stunning imagination make this low-budget sci-fi story engaging, with masterful camerawork and control of tone.
Words on Bathroom Walls: A teenager struggles with mental illness and his family struggles to find a way to help him in this sympathetic story.

Some notes: “The Photograph” and “Sylvie’s Love” were the two most deliciously romantic films of the year both had nearly-all Black casts and both were throwbacks to the era of the great Hollywood love stories. “The Personal History of David Copperfield” and “The Broken Hearts Gallery both used race-blind casting to bring together two of the strongest ensembles of the year and give their stories a freshness and vitality I hope more movies will emulate. And of course this was the best year ever for streaming media, including “The Queen’s Gambit.”

Force of Nature: Even a script written by algorithm would make more sense than “Force of Nature,” a dumb dud of a movie that relies on the most preposterous of coincidences and the most exhausted of premises (in both senses of the word).
The War With Grandpa: Even the A-list cast can’t win the war with a dumbed-down script, awkwardly staged stunts, and lackluster direction.
Inheritance: A film that’s so full of holes, it was likely recut from an earlier version and not quite stitched back together.
Holidate: “Holidate” has nothing to say about anything. Basically, if Hallmark movies like “The Mistletoe Promise” and Netflix hits like “The Kissing Booth” are out in the world looking as beautiful as Dorian Gray, “Holidate” is the portrait hidden away in the attic getting more scrofulous by the minute.
Love, Weddings & Other Disasters: Oscar-winners Diane Keaton and Jeremy Irons can’t make up for a script full of tired jokes. Their blind date is funny because she’s blind, get it?
The Stand-In: Drew Barrymore seems to be trying to make her own Adam Sandler movie, playing opposite herself as two unpleasant characters, a movie star and her stand-in.