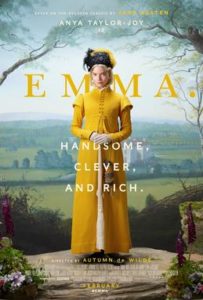 Jane Austen described the eponymous central figure of her 1815 novel as “a heroine whom no one but myself will much like.” The opening sentence of the book almost challenges us to like her: “Emma Woodhouse, handsome, clever, and rich, with a comfortable home and happy disposition, seemed to unite some of the best blessings of existence; and had lived nearly twenty-one years in the world with very little to distress or vex her.” How can we root for someone who already has everything?

The answer, as Austen knew, is to immediately have her lose much of it. She will still be handsome, clever, and rich. But the rest of the story will bring plenty to distress and vex her. Emma’s past freedom from distress and vexation has left her blissfully unaware of the risk of failure. She is about to find out that those risks include not just personal humiliation but pain caused for others.

As this brightly sumptuous story begins, Emma (Anya Taylor-Joy), who lives in a Downton Abbey-like great house with her widowed father (Bill Nighy) is delighted to have arranged a match between her neighbor (Rupert Graves) and the governess who has been her dearest friend and substitute mother (Gemma Whelan). It was such a triumph that she is eager to do more to rearrange and improve the lives around her, starting with an unassuming young woman named Harriet Smith (Mia Goth). Just as the last match had the double benefit of romance and an elevation of status (from paid companion to wife of landed gentry), she expects the same for Harriet, who is in the society no-man’s-land of having been born out of wedlock to unknown parentage. A step up for her would be a match for the local clergyman, Mr. Elton (Josh O’Connor). Emma is determined to make this happen.

Meanwhile, two newcomers arrive in Emma’s very small community, where the number of people near her social level, meaning worthy enough to be entertained in her home, seems to be around a dozen at most. A kind-hearted spinster named Miss Bates (the wonderful Miranda Hart of “Call the Midwife” and “Spy”), who lives with her hearing-impaired mother, is delighted that her niece, the lovely and talented but poor Jane Fairfax (Amber Anderson) has come for an extended stay. Emma is no longer the center of interest, just as she has new reason to wish to be noticed. The other arrival is the handsome and charming Frank Churchill (Callum Turner). Also in the neighborhood is George Knightly, whose brother is married to Emma’s sister, which gives him some basis for familiarity. He does not hesitate to correct Emma when he thinks it is called for.

There have been many versions of the Emma story, most notably the elegant Douglas McGrath version with Gwyneth Paltrow and Jeremy Northam and Amy Heckerling’s wittily updated “Clueless” with Alicia Silverstone. This one, a first time feature from music video director Autumn de Wilde is an “Emma” for our times. It is visually luscious, with endless, exquisite period detail. But to keep it from feeling stuffy, it is briskly edited, almost a door-slamming farce at times, with literally cheeky touches (a brief look at a couple of very attractive bare bottoms). The costumes are meticulously researched with details to swoon over, but they are also perfectly suited to provide more insight into each of the characters.

I was particularly taken with the hat worn by Mrs. Elton that made her look like an exclamation point and the red capes of the schoolgirls who march in rows through the town. The food in the novel plays a significant role, and it does in the film as well. Sparkling performances by a cast mostly not (yet) big names make this a welcome ensemble piece. If Knightly or Churchill or Fairfax were played by people already featured in People’s “most beautiful” issue, we would be able to anticipate some of the storyline’s best surprises. The most recognizable, of course, is Bill Nighy, perfectly cast as the anxious Mr. Woodhouse, always worrying that someone might be in a draft. This interesting essay speculates that he is not just querulous but actually suffering from early stage dementia, which puts Emma’s attentiveness/co-dependence and need to control others in a more nuanced light.

Most of all, this movie is fun, as much fun as Austen herself would have wanted it to be. “Emma” movies just keep getting better, like Emma herself.

Parents should know that this film is unrated. There is brief, nonsexual rear male nudity and there are some tense and uncomfortable situations.

Family discussion: Why was Emma so thoughtless with Miss Bates? Why was it hard for her to see the truth about Frank Churchill and Jane Fairfax?

If you like this, try: the Gwyneth Paltrow version of “Emma” and the book and the updated version, “Clueless”