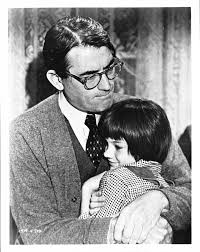 Reminder: My ebook about 50 great movie fathers is available free this weekend. Some of my favorites:

Laurence Fishburne plays a devoted father who wants his son to know about the challenges he will face.

To Kill a Mockingbird: Atticus Finch

Gregory Peck plays a lawyer who teaches his daughter about empathy.

Father of the Bride: Stanley Banks

Spencer Tracy plays the devoted but befuddled father who is emotionally and financially overwhelmed by his daughter’s wedding. (See also the remake with Steve Martin.)

Ken Takakura plays an estranged father who pays tribute to his son by trying to complete his film.

Albert Brooks provides the voice for the fish who swims through the ocean to find his son.