Notes from the Upside Down: Guy Adams on Stranger Things

Author Guy Adams answered my questions about his new book, Notes from the Upside Down: An Unofficial Guide to Stranger Things available August 29, 2017. One reason for the popularity of the instant classic Netflix series is that it invites viewers to explore it on many levels. In the book, Adams talks the reflections and variations throughout “Stranger Things” of the influences that inspired the writer/directors, Matt and Ross Duffer, when they were growing up in the 1980’s. Adams also provides extensive background details on the music, the actors, and the ways that the show reflects and transcends genre. It is the perfect companion to rewatch the first season before season two premieres on Netflix October 27. 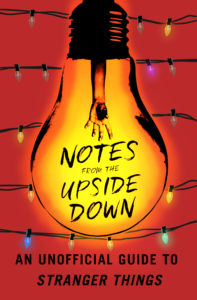 How long did it take you to watch “Stranger Things?” (I admit, though I very seldom binge-watch, I saw it all in less than 24 hours.)

I didn’t binge actually. I am the sort of writer who is constantly being beaten to a weeping pulp by one deadline or another — a fortunate problem to have I’ll admit, though the cats once staged an intervention when they caught me eating from their biscuit bowl as I didn’t have time to stop and cook.

My partner and I usually have a TV show on the go that we watch together for an hour of Not Work a few evenings a week, so it actually took me a couple of months or so. Naturally, when working on the book I did binge, cramming the lot in over a few days while making notes.

Can you give examples of influences/call-outs to Stephen King, John Carpenter, and “Poltergeist?”

Oh Lord… that’s a terribly big question. When talking about influence we’re really discussing the flavor of the show. You take a forkful, chew and say… “Is it just me or did you sprinkle some Firestarter in here, just to give it spice?” Aside from obvious nods — which are simply passing moments, in-jokes almost — it’s really a case of raiding your mental food cupboard and pulling out all your favorite foods and combining them. A big part of the book is discussing the resultant stew of all of that. Something that is a meal in and of itself but which retains the taste of the individual ingredients.

What is it with the food metaphors? Maybe I need lunch.

*Heads for the cats’ biscuit bowl*

I’ll throw a call-out to each your way just so I’m not dodging the question entirely.

In the fourth episode we see a state trooper reading Cujo; in the seventh episode science teacher Mr. Clarke subjects his date to Carpenter’s The Thing; In the first episode Will’s mum tells him she’ll take him to see Poltergeist.

Why did the Duffer brothers want the kids to face a science-based threat, rather than pure fantasy?

Their initial ideas for the show grew from fascination with secret government projects such as MKUltra and The Montauk Project (one of which is substantially more fictional than the other…. probably). So they were always coming at the story from the perspective of weird science rather than the supernatural. It’s always a great storytelling trick for horror and fantasy, of course, start from a perspective of science — from what may be real — and then let rip. Monsters can be more terrifying if you sell them in terms of a lab rather than a gothic crypt.

Of course the fact that that’s the case shows the fascinating way audience psychology has changed over the years. When you go back to the dawn of horror fiction, when readers were far more religious and spiritually inclined, terror was always to be found beyond the grave. Then, as the years — and technology — progressed we found more things in the real world to frighten us. The devil started playing with test tubes, atomic bombs, DNA… Where are the boogeymen of tomorrow I wonder? When will we start seeing terrorism couched in terms of horror fiction? Fundamentalist zombies, fighting against the moral crimes of the living…

What is it about Barb? Why did she become such a fan favorite?

She’s a perfect point of audience empathy I think. The girl who never quite did. She has one close friend, doesn’t quite belong, gets dragged into another dimension by a mucous-drenched, egg-laying kill machine… I mean, we can all relate.

Horror and fantasy have always played well to the outsider. Especially young outsiders. How many of these stories portray The Unpopular Kids at school, learning to battle their demons and winning? Proving themselves to their parents, their bullies, the beautiful people they really want to sleep with but can’t because ‘they’re out of their league’? It’s all wish-fulfilment, really.

Now I want to be Paul Sheldon, having a nice relaxing lie down while someone waits on me hand and foot. Especially foot.

Do you have a favorite song on the soundtrack that is especially fitting for its scene?

Kyle Dixon and Michael Stein’s soundtrack is a real joy throughout though. I never met a synthesizer I didn’t love. To the considerable misery of readers, I prove as much by offering a playlist of electronic-based movie soundtracks they may wish to subject themselves to.

Over the last eleven years or so of being a writer I’ve all but given up on songs, my iTunes is loaded with soundtracks. This upsets my partner no end. She can often be found staring at me from the door of the office, shaking her head sadly, ‘This… I don’t know what this is… but you can’t call it music.” I was listening to Bruno Nicolai’s soundtrack to All the Colors of the Dark yesterday, I think she came very close to leaving me.

The series’ biggest surprise is the way it blends genres, with elements of science fiction, horror, and both tween and teen coming-of-age. How do the Duffer brothers as filmmakers make that so seamless without jarring shifts in tone?

I’d argue that this kind of fiction always blurs those boundaries, though. You can find horror in its purest form in cinema, certainly, a solid eighty or ninety minutes designed to do nothing but scare. Generally though, horror is the theme you attach other narratives to. It’s a way of talking about other stuff. Family, relationships, love, faith, how difficult it is to be gay when you dream of a man with blades for fingers (admittedly that last one is quite specific but Nightmare on Elm Street Part II went there for us).

Perhaps I’m biased but I’ve always loved fiction that gleefully switches tone. Life is never a single genre. In any given day I try and hit all the major algorithms on your Netflix system: comedy, horror, fantasy, thriller, romance, nunsploitation… I don’t always manage of course, but one has to have a goal in life.

If you could have one item from the “Stranger Things” wardrobe closet for your personal collection, what would you pick? What items are especially evocative of the 80’s?

Well, I already have Dustin’s hair (I simply beat it into submission with scissors) but I can’t say I hanker after many of the clothes, I owned too many of them the first time round. What possesses someone to think ‘fluorescent’ and ‘clothing’ should ever go together? If you’re not trying to avoid being hit by a car at night there’s really no excuse for it.

Steve Harrington is certainly the character that pulls the look off best, in that hateful way horrendously attractive people can.

I especially appreciated your focus on some of the actors in the movie’s smaller roles. When we re-watch to prepare for the second season, who should we pay special attention to? Who do you hope will be back?

“There’s no such thing as small parts,” someone once said. Probably some poor actor holding a spear in a lousy production of Julius Caesar.

I was determined to shine the spotlight on as many people as possible, though. It’s easy to get distracted by the star performances but it would have been an empty and pointless set without everyone else.

As readers will know, I’m vaguely obsessed with Cara Buono as Karen Wheeler. There’s a whole different story happening there and we only get hints of it. I’m convinced she’s the town’s most thrilling person trapped in its dullest marriage. Surviving off chardonnay and occasionally picking locks to her children’s rooms. I have no doubt she’ll be back but I’d be most interested in her starring in a spinoff, a horror-tinged reboot of Scarecrow and Mrs. King. She could battle demons while her husband sits in his La-Z-Boy and dreams of chicken dinners.

A shorter version of this interview originally appeared in the Huffington Post.