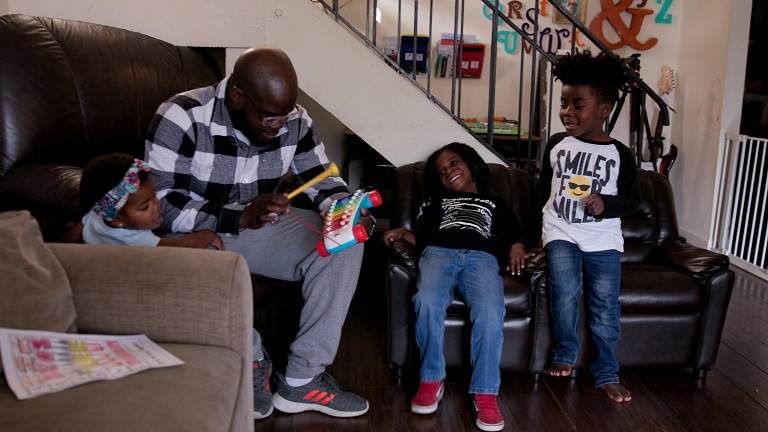 Bryce Dallas Howard’s loving tribute to the men in our families is personal. It features her father, actor/director Ron Howard, his father, the late actor Rance Howard, who tells a beautiful and very meaningful story about then-Ronny Howard’s first day of filming on “The Andy Griffith Show,” and her brother, a soon-to-be father as the documentary begins and a happy but exhausted new dad at the end. The movie also features celebrities like Jimmy Kimmel, Conan O’Brien, and Will Smith with their own comments on being dads, and visits to the homes of “ordinary” but extraordinary dads, in the US and other countries, including a couple of fathers who adopted four special needs kids in six months and a stay-at-home father of four small children. Plus clips of various child and teen meltdowns that are hilarious if they are not yours. So yeah, I cried through the whole thing. My dad is awesome. So is my husband, a magnificent dad to our two children.

The celebrities are fun but the heart of the movie in every way are the dads no one outside their families may know but who are heroes in what they do every day. There have been fathers since there have been people, but the idea of what a father can and should be has changed, and this movie shows us how dads are inspired by, influenced by, and reacting to the fathering they received. The variety of dads includes not just racial, cultural, and nationality diversity but diversity in family connections, some parents still together, some not.

Today’s dads may be more involved in the moment-to-moment details of their children’s lives than some traditional briefcase or lunchbox toting dads who went to work all day and came home to dinner on the table and kids bathed and ready for bed in the old days. One of the movie’s subtle themes is the combination of what is eternal and what is changing or what can change and is decided by each of us as we grope toward our own parenting styles and how to use that style to communicate unconditional love while urging our children toward independence, gratitude, empathy, and finding a way to use their own strengths to determine their paths. This film is a heartwarming tribute to the dads who give us so much and in return get a tie, and a smudgy hand-made card. I’d just like to end this with thanks to my wonderful dad, who told me the coffee I made for his breakfast in bed on Father’s Day was so delicious he was going to bring it into the bathroom with him while he shaved. I was so proud of myself. Now, I’m proud of him.

Parents should know that this film includes depiction of special needs and health challenges and some bodily function moments.

Family discussion: Which of these dads is most like your father? Most like the father you’d like to be? How was being a father different from what these men expected? If you were creating a user guide for parents, what would it say?

If you like this, try: “The Other F Word”

There are oh so many stories for children about orphans and about people who are sent to live in creepy, mysterious old houses. The Willoughbys, based on the book by Lois Lowry, tweaks those and some of the other conventions of children’s stories, and turns some of them upside down. But one key element remains the same: children have an adventure. They are brave, they solve problems, they stick together, and they end up better off than they started. And all of that happens in a movie that is a a delight for the eyes, with wildly imaginative settings and clever details. There’s even a candy factory that’s half Willy Wonka and half Pac-Man.

Deliciously gruesome (but not quite as much as A Series of Unfortunate Events), it is the story of four red-headed siblings who live in a gothic mansion squeezed between skyscrapers, with acid narration from a nearby cat (Rickey Gervais).

The Willoughbys have lived there for generations and their history hangs heavily over them. Literally. There are huge portraits of ancestors, all sporting the thick yarn hair scowling down at today’s Willoughbys.

Also scowling, when they bother to notice them, are the Willoughby parents (Martin Short and Jane Krakowski), who devote all of their affection and attention to each other and can barely be bothered to notice that they have children, much less talk to them or feed them. The oldest is Tim (Will Forte, who worked with director Kris Pearns on “Cloudy With a Chance of Meatballs 2”). Then there’s his sister Jane who loves to sing (Canadian pop star Alessia Cara). By the time the twin boys were born, the Willoughby parents couldn’t be bothered to think of two names or provide them with two sweaters. So they are both called Barnaby and share one sweater between them.

In a conventional story of an intolerable home, you might expect the children to run away. But this is a story that likes to turn things upside down. Tim likes the house and is determined to uphold the grandeur he associates with the ancestors and the Willoughby name.  He and Jane come up with an idea: their parents should run away from home. So they arrange an extended trip for their parents, a trip that just might include some dangerous activities.

What they don’t expect is that their parents might send a nanny (Maya Rudolph, delightfully whacky).  Never having been treated with kindness, Tim does not trust her at first. Also, there is an orphan baby left on their front stoop. The children drop her off at a candy factory run by a a man who looks a little foreboding but also like he’s made of candy named Commander Melanoff (Terry Crews).

And so the Willoughby children end up going on an adventure that is colorful,  funny, exciting, and satisfyingly heartwarming. The government’s child protective services are unnecessarily demonized but the message of resilience that we can create the families we want if nature gets it wrong the first time is very welcome.

Parents should know that this movie includes comic peril and violence (no one hurt) and humorously portrayed child neglect and abandonment themes.

Family discussion:  How do Tim and Jane have different ideas about the way to solve their problems? Did you ever misunderstand someone’s words as Tim did with the nanny?

If you like this, try: “A Series of Unfortunate Events” and “Cloudy With a Chance of Meatballs” 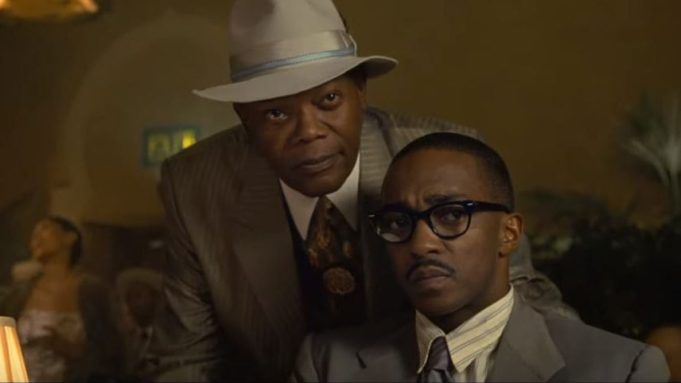 B +
“The Banker,” now available on Apple TV+, is three movies in one, all of them vivid, engaging, and compelling.

First, it’s a heist in plain sight movie, and all, or pretty much all, strictly legal. Two black men, Bernard Garrett (Anthony Mackie) and Joe Morris (Samuel L. Jackson) start a business in the pre-Civil Rights Act era when it was not only legal but the universal practice to keep people of color not just out of the neighborhoods where white people lived and worked but out of the places that make property ownership possible, the business that sell homes and office buildings and the people who provide the financing for those purchases.

Second, it is a “My Fair Lady”-style Cinderella makeover fairy tale movie, about taking someone who has the heart to be more than he is and teaching him the language, manners, and skills necessary to have credibility in the highest levels of society, or, in this case, business and finance. Garrett and Morris need a white man to pretend to be the president of their enterprise, so they recruit Matt Steiner (Nicholas Hoult), a genial construction worker, and teach him their version of “the rain in Spain stays mainly on the plain,” how to do (or pretend to do) complex valuation computations in seconds and how to play golf, so he can display the (apparently) effortless credibility needed to do big-money deals.

Third, it is a very personal underdog story of heroes to cheer for, two very different men, both played with exquisite precision, working together against near-insurmountable odds to overturn a virulently oppressive system.

Garrett has a head for numbers even as a young boy, where he listens in on the conversations of men of business as he shines their shoes. As a young man, he understands that the ability to own property is as critical to financial stability, social parity, and equal opportunity as the kind of political organizing that is getting started at the same time. Morris is already a savvy businessman with clubs and real estate holdings. Their personalities are very different — one a quiet, devoted family man, the other a good-time guy. But they both know how things work. They know how to make themselves invisible, pretending to be limo drivers or janitors to get access to the places of power while their front-man pretends to know what he’s doing. (One problem with the film is its failure to give Nia Long more of a role than the ever-supportive wife, though this ever-talented actress lends the character some dimension.)

We know from the beginning, opening on a Senate hearing with some harsh questioning, that powerful people are going to try to stop Garrett and Morris from taking some of their power. This movie, with MCU star-power portraying real-life superheroes, gives some of it back to them.

Parents should know that this film has some strong and racist language, some sexual references, scenes in clubs and bars, and some historical depictions of racism.

Family discussion: What did Morris and Garrett have in common? Who is most like them today? What should they have done about Steiner?

If you like this, try: “Hidden Figures” and “Self Made,” and read more about Bernard Garrett and Joe Morris. 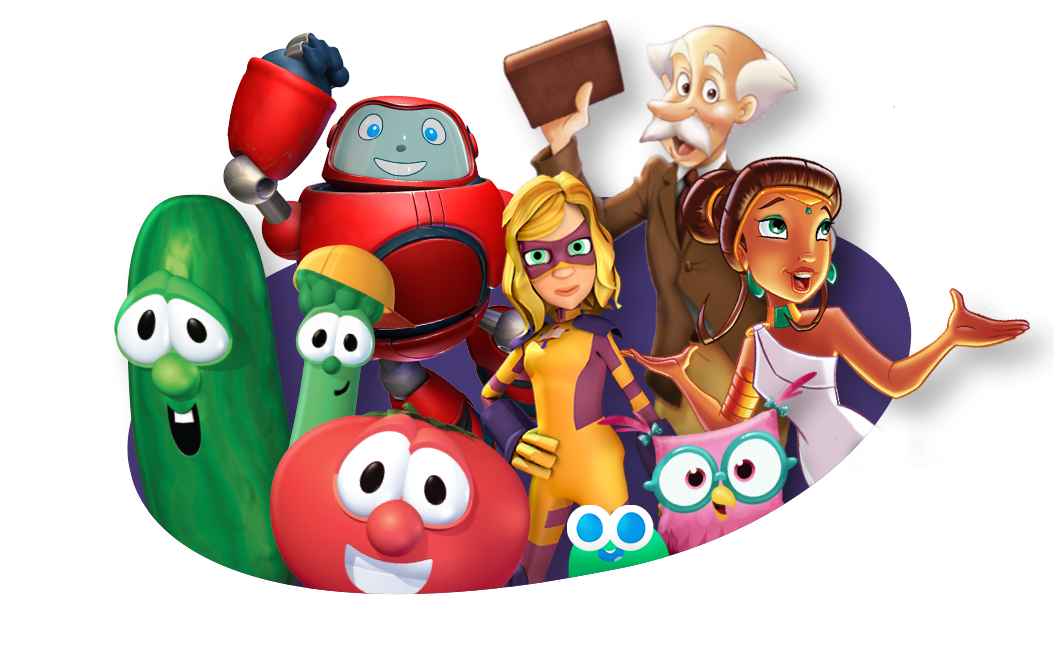 Families who find the content on television, cable, and streaming services like Netflix and even some of the films on Disney Plus troubling for family viewing have a new alternative with extended Christian content, called MINNO (from the Greek for “to abide.” Their slogan: Stories kids love; values parents trust. The founders say, “We are parents, church volunteers, ministry leaders, developers, writers, and technology and entertainment executives with one mission: serving you, as Christian parents, in raising the next generation of believers…. our goal is to help families connect with God through amazing stories, books, and resources.” Viewers can find classics like Veggie Tales and programs like “What’s in the Bible?”, “3-2-1 Penguins”, and CBN’s “Superbook.”

And now three are two ways to share it;

1. Buy a Minno gift card! E-gift cards are now available for 1, 2, and 3 year subscriptions. A Minno subscription makes a great Christmas gift for a special family in your life.

2. Join the Minno High Five referral program and you’ll have immediate access to everything you need to share Minno with your friends through email and social media. As an added bonus, when a friend subscribes to Minno through your link, you’ll get a $5 e-gift card to the store for your choice.