Common Sense Media is an outstanding resource for parents and I am proud to be a member of their board of advisers. Their new report, “Digital Literacy and Citizenship in the 21st Century: Educating, Empowering, and Protecting America’s Kids,” and they define digital literacy as the ability to:
1) use technology competently,
2) interpret and understand digital content and assess its credibility, and
3) create, research, and communicate with appropriate tools.
We are separated from the next generation by the deepest technological divide since the 1950’s, when the baby boomers who grew up with television had a very different relationship to media than their parents. And now a whole new world of technology that enables exponentially expanded categories of information and connections has made possible an unprecedented range of risk and opportunity The CSM report notes that today

America’s children are growing up in the center of a technological revolution. Digital media defines their lives in unprecedented ways; they spend more time online, texting, watching TV and movies, and playing video games than they do in school or with their parents. The convergence of portable personal technologies, unfiltered access to information, and user-generated content profoundly impacts how children grow and learn….Our kids know more about this world than most of the adults in their lives do.

It can be difficult for parents to provide oversight and guidance. CSM calls for the creation of school curricula to include digital literacy and citizenship. The report and the specific details of its proposal are well worth reading.

Jonas Brothers fans will feel like they are on stage with Joe, Nick, and Kevin in this immersive 3D concert film from the recent “Burning Up” tour. Brief backstage glimpses of the JoBros waking up, having breakfast, filming a music video in Central Park, visiting a record store for the release of their new CD, and, in a brief tribute to A Hard Day’s Night

Seasoned pros at 21, 19, and 16, the brothers started performing as children, with Nick and Joe appearing on Broadway as children and their first tour as a group in 2005. They are natural showmen, obviously having fun on stage, with an appealing easy athleticism and infectious enjoyment. Parents can feel comfortable with their strictly G-rated lyrics and resolutely G-rated off-stage personas. Their father is a is a former Assembly of God pastor and they are open about their commitment to their faith. A shirt may (briefly) be off, but their purity rings stay on.

The concert benefits from guest appearances by fellow teen pop-stars Demi Lovato and Taylor Swift (whose brief romance with Joe Jonas inspired her new break-up song “Forever and Always”). Both young women sing female empowerment anthems that add a bit of balance. But even when they are on stage, the brothers are always at the forefront, the guest stars another in a series of precisely timed show-boosters that include fireworks, cartwheels, lifting the boys on pedestals, spraying the fans with firehoses, and — this is a 3D movie after all — a number of objects being thrown at the audience including guitar picks and drumsticks.

The shots of the fans — hyperventilating, weeping, smiling so widely their braces seem to take over the entire screen, jumping over police barricades — may be there to promote the Jonas Brothers brand but they will also be reassuringly validating to the movie’s primary audience. They may come to enjoy the music and the behind-the-scenes glimpses of the teen idols, but they will appreciate the sense of community and good spirits as well.

Parents should know that this is a G-rated film with no bad language, sex, or violence. One of the boys briefly has his shirt off and the brothers spray their fans with firehoses in a manner some may find suggestive.

Family discussion: What is it that makes the Jonas Brothers so popular? Which one is your favorite and why?

, Burning Up: On Tour with the Jonas Brothers

, and Music from the 3D Concert Experience 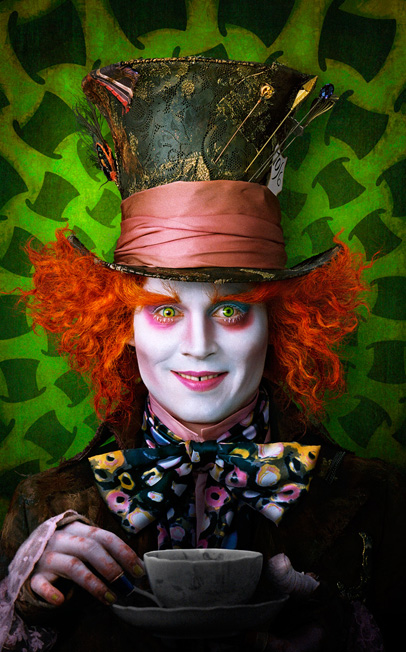 i’m really looking forward to Tim Burton’s upcoming “Alice in Wonderland” more than ever after seeing this picture of Johnny Depp as the Mad Hatter.

And just consider this: Alan Rickman as the Caterpillar. Brilliant!

Do the Right Thing

Twenty years ago, Spike Lee made a tough, smart, and very provocative film that included an electrifying moment when the character played by Lee himself held up a trash can and aimed it at the glass window of a pizzeria owned by an Italian named Sal (Danny Aiello). People are still arguing about what happened next. The Root has a superb collection of resources and reflections on the film’s 20th anniversary, including thoughts on Lee’s sometimes-troubling portrayal of women by the always-insightful Teresa Wiltz, an update on the Bed-Stuy community’s current challenges, and a consideration of one couple who memorably saw the film on their first movie date and are now living in the White House.

It takes place on the hottest day of the year in in the Bedford-Stuyvesant section of Brooklyn, where there is an uneasy alliance between the old-time residents like Sal and the more recent but majority residents who are African-American. In general, they get along because they need each other but there is a lot of frustration on all sides. Tempers get hot as the weather gets hotter.

Watch for Samuel L. Jackson, John Turturro, Rosie Perez, and Martin Lawrence very early in their careers and legends Ossie Davis and Ruby Dee giving, as always, performances of endless subtlety and grace. And watch to see what has and has not changed since the movie was released two decades ago.

Those who are interested in the Iranian election and protests should see this superb Iranian film that is one of the finest explorations of freedom, elections, democracy, and the rule of law I have ever watched on screen.

It begins with a surreal image as a solitary soldier patrolling an Iranian island coast sees a box dropped by parachute from a plane. Soon after, a boat arrives and a woman disembarks. She informs the soldier that she is there to collect as many votes as possible before 5 pm and he is to accompany her. They travel the island debating the legitimacy of the voting process and the ability of the law to ensure fair treatment. The woman is a stickler for the letter of the law, even when the result is difficult to justify. That is, until they get stopped by a broken red light and she must decide whether to stop at the deserted intersection, missing her boat and invalidating the votes she has collected, or break the law by running the light. The film, made by Canadian-Iranian Babak Payami works brilliantly as allegory and as quasi-documentary. We never learn the names of the characters; they are just “the soldier” and “the girl.” But they and their predicament are immediately involving and distinctive. Highly recommended for high school and college civics classes and for anyone who appreciates superb film-making.