We mourn the passing of neurologist and writer Oliver Sacks, who illuminated the workings of the brain and set an example of grace and compassion that extended to the way he shared his thoughts about his terminal diagnosis.

I first learned of his work when I read his book, The Man Who Mistook His Wife For A Hat: And Other Clinical Tales

, stories about his patients. Those extreme examples of impairment of perception, cognition, and functioning were utterly absorbing. Sacks’ dedication and kindness, his deep connection to the humanity of his patients, the lyricism of his descriptions, are profound and moving.

His work inspired art. The best known is Awakenings

, directed by Penny Marshall, with Robin Williams playing a character based on Sacks and Robert De Niro playing one of his “locked-in” post-encephalitic patients. They were thought to be incurably impaired, almost completely, until Sacks proposed a new treatment. They were brought back to life, but, tragically, only briefly.

Nobel Prize-winner Harold Pinter adapted another of Sacks’ stories into a play, “A Kind of Alaska.”

The Man Who Mistook His Wife for a Hat was adapted into an opera.

Another of my favorite books is An Anthropologist On Mars: Seven Paradoxical Tales

. It did more than provide insights into the way people with autism perceive the world; it allowed neurotypicals to see the world through the mind of Temple Grandin

, which gave her opportunities to tell her own story in books and in an award-winning film where she was played by Claire Danes.

I was privileged to see Dr. Sacks speak twice. He was candid about his own impairments, including prosopagnosia (the inability to recognize faces). His book, A Leg to Stand On

describes his own experience as a patient, following a severe leg injury that affected his perception of his own body. His depth of understanding encompassed all ways of perceiving to demonstrate that what we think of as “normal” is just one small part of the range of human experience. His legacy should inspire everyone to think more about how the perceptions of those around us affect the way they see the world and to do more to meet them where they are and to build on what we share.

All are in good health. “I don’t feel any age,” says Morison. “I know I’m old, but I just feel like me.” Lloyd puts it this way: “There’s a conflict between what’s in your mind and what’s in your body.” They each led active lives. Sawyer says, “I always danced, played golf, swam — I was a doer all my life.” “I was playing good tennis up until 100,” says Lloyd, who had a regular game with Chaplin and once played a set with a young man named John F. Kennedy. “It was only after fall that I became aware of my age. I move slowly and I used to move fast. I miss that.”

Michael Caine and Harvey Keitel play friends on vacation in an elegant hotel at the foot of the Alps. Fred, a composer and conductor, is now retired. Mick, a film director, is still working. They look with curiosity and tenderness on their children’s confused lives, Mick’s enthusiastic young writers, and the other hotel guests. While Mick scrambles to finish the screenplay for what he imagines will be his last important film, Fred has no intention of resuming his musical career. But someone wants at all costs to hear him conduct again.

Thanks to Indiewire for including me in this great rundown of the all-time worst movie accents. Critics vented frustration and fury, many picking Quentin Tarantino and Dick van Dyke, but I went with two actors who played Robin Hood: 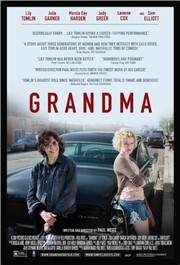 Lily Tomlin is cranky, feisty, tough, and utterly irresistible in this story of a grandmother who has to visit past decisions about her own life in order to help her teenage granddaughter. Tomlin plays the aptly named Elle (French for “she”), a feminist poet. Her work is respected and influential but that has not translated into financial stability. She has recently cut up her credit cards and made a wind chime out of them.

As we first see her, she is dumping her much younger girlfriend, Olivia (Judy Greer). No “it’s not you; it’s me.” No, “I’ll always remember the good times.” No lyrical meditations on love and loss. Not even any arguments or accusations. Just “It’s over. Leave.”

And then Elle’s granddaughter arrives. Her name is Sage (Julia Garner), and she has a head of fuzzy, soft curls that make her look like a dandelion. She is young and vulnerable but determined. She needs help, and it is clear that she would not be there if she had any other option. She is scheduled to have an abortion that afternoon, but she needs $630. And so Grandma and Sage set off in Elle’s clunker of a car, making desperate visits to people who might be able to help them. So we see a series of encounters, sad, angry, poignant, romantic, score-settling, each impeccably performed by an outstanding cast of actors in small scenes with deepening impact. We learn more about Elle’s life, the wrenching loss she is still mourning, the kindness and unkindness she has shown, and the way she has and has not dealt with the consequences. Standouts include Nat Wolff (“Paper Towns”) as the father, Laverne Cox as a sympathetic tattoo artist, Marcia Gay Harden as Elle’s brisk businesswoman daughter, and Sam Elliott as Elle’s ex.

Writer/director Paul Weitz (“About a Boy”) has taken a story that could be a parody of the worst nightmares of Fox News fans and made it into a very human story of love, loss, and overcoming the fear of intimacy. It is about the families we create and the perfect love we must feel for imperfect people.

Parents should know that this film has very strong and crude language, drinking, drugs, teen pregnancy, and extended discussion of abortion.

Family discussion: Why does Elle break up with Olivia? Why don’t Elle and her daughter get along? Why is the film called “Grandma” and not “Elle” or “Elle and Sage?”