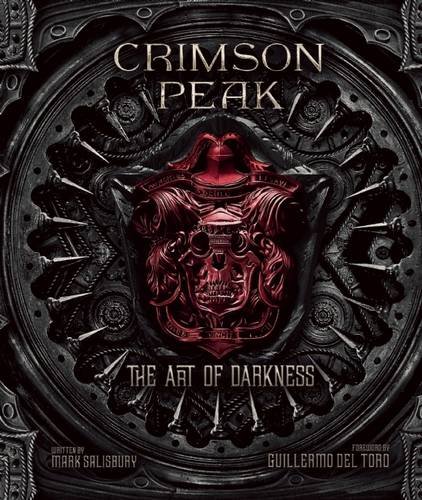 Crimson Peak: The Art of Darkness

Jessica Chastain, Tom Hiddleston, and Mia Wasikowska play the leads in Guillermo del Toro’s new psychological horror film, “Crimson Peak,” but it is the house that is the star of the film. Del Toro’s brilliant visuals immerse the audience in the growing sense of oppressive dread of the twisted ghost story. As creepy and terrifying as the story is, the details of the house are endlessly enticing. So I am thrilled that there is a book about the making of the film that is as imaginative and enthralling as the film.

Crimson Peak: The Art of Darkness

, by Mark Salisbury, is a sumptuous treat with fascinating behind-the-scenes details, production drawings, and intricate visuals that are a work of art on its own.

There are inserts and insets throughout, giving the reader the experience of discovering secret treasures. The designs are wildly imaginative and yet somehow seem as they they have always lived in our most private nightmares. The insights from the stars, director, and designers take us into a world almost as fascinating as the world of the story — the fantasy, insight, skill, and work that are necessary for creating art, whether a movie or a book.
Related Tags:
Behind the Scenes Books

A New Ad Shows What Barbie (Yes, Barbie!) Can Do for Girls

Tormented but brilliant chef Adam Jones (Bradley Cooper) invites the sous chef he hopes to persuade to come work for him to lunch. At Burger King. They are both food snobs. She does not want to touch anything in the fast food outlet and is barely willing to sit in the booth. And he, improbably but only slightly more improbable than pretty much everything else in the movie, tries to persuade her that it is part of the rich tradition of “peasant food.” Yes, it is a lesser cut of meat, but that is why it is so imaginatively prepared.

Uh, no. That is not true of Burger King, and it is not true of this film, a lesser cut of meat indeed, and not deserving of the terms “imaginative” or “peasant food.” We don’t believe the praise for fast food from a guy who says anything less than perfect must be thrown away, that a chef must apologize not to the boss or to the customer but to the piece of turbot for inferior preparation. We don’t believe that a man who says he does not want customers to appreciate his food — he wants them to ache with longing — would eat a Whopper.

Most important, we just do not believe Adam, even with Cooper’s piercing blue eyes and movie star magic, is more than a lesser cut of meat himself. Here’s a hint, Hollywood — it is often fatal to a movie to have its characters more in thrall to the lead than the audience is.

We meet Adam as he is completing his self-imposed penance for sins we will spend the rest of the film learning about. The three-year expiation — shucking one million oysters. Does that have anything to do with making amends to those he harmed? No, but it is picturesque and it gives him a chance to tell us that oysters and apples cannot be improved upon, but it is the duty of the chef to try.

It turns out that Adam was once a star of the foodie world, but hubris — and many, many drugs — led to his downfall, taking lots of other people down with him. And so, we see him visit his old friends, enemies, and frenimies, to see if he can put the old band back together to make culinary history and achieve a third Michelin star.

For those who missed the Michelin star lecture in The 100-Foot Journey, we get the “Star Wars” version here. One star from the legendary rater of restaurants is Luke Skywalker. Two stars are “whoever Alec Guinness was” (Obi-Wan Kenobi). And three stars is the Jedi Master: Yoda. (I actually prefer Michelin’s own cost-benefit analysis approach: worth a stop, worth a detour, worth a journey.)

Or, in movie terms, worth a theater ticket, worth a Netflix rental, wait for cable. This falls somewhere between the second and third category. Food and food preparation are presented with loving, luscious care far in excess of the attention to the story or characters, neither especially well seasoned or fresh.

Parents should know that this film has constant very strong language, some sexual references, references to drug abuse, some angry confrontations, and brief violence.

Family discussion: Would you want to eat in Adam’s restaurant? What do you think of his million-oyster penance?

If you like this, try: “Chef” and “Babette’s Feast” and reality shows about Mario Batali and Gordon Ramsey, who worked on this film