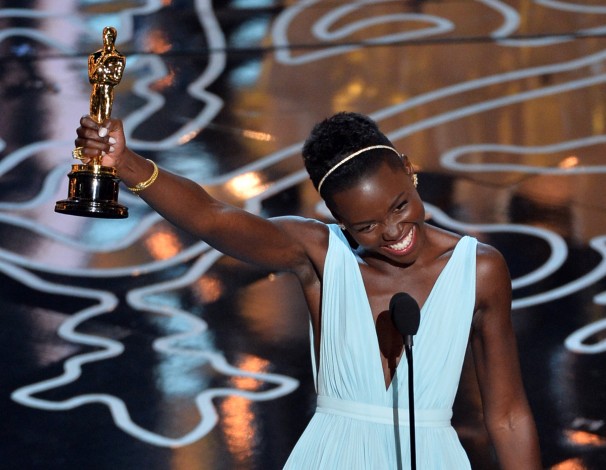 Get ready for Oscar night with an Oscar trivia quiz!

1. What Oscar-winning director is the son and father of Oscar-winning performers and what was his connection to their award-winning films?

2. What was the first film to win all five top awards: Best Picture, Actor, Actress, Director, and Screenplay? (Extra credit if you can name the only other two films to sweep these categories.)

4. Who was speaking when a streaker interrupted the Oscar broadcast in 1974?

5. Who mangled the name of singer/actress Idina Menzel in 2014?

6. Which Best Actor winner swept presenter Halle Berry off her feet with a passionate kiss?

7. Who is the only person named Oscar to actually win an Oscar?

8. What was special about the special Oscar awarded to Walt Disney for “Snow White?”

9. Who was the first (and so far, only) woman to win the Best Director Oscar?

This year’s Oscar broadcast has an important innovation.  Nominees have been asked for their list of people to thank, and those names will run at the bottom of the screen so they can — we hope — say something more thoughtful and interesting than the usual frantic jumble before the music cuts them off.

Chris Rock’s hosting comes at the right time, as the #oscarssowhite campaign once again draws attention to the unconscionable snubs to performers and filmmakers of color.  The Washington Post has an excellent story about “The Staggering Numbers that Prove Hollywood Has a Serious Race Problem.”   The Oscar voters are “89 percent male and 84 percent white, and roughly half are 60 or older.”

“The academy is going to lead and not wait for the industry to catch up,” said Cheryl Boone Isaacs, the academy president and a black woman, in a statement. Isaacs was not made available for comment for this story, but at an Oscar nominees luncheon this month, she said, “This year, there’s an elephant in the room. I have asked the elephant to leave.”

The failure to include a single non-white nominee in the acting categories this year — again — has put some pressure on the Academy and the industry. Stories like this one in the New York Times about What It’s Like to Work in Hollywood (If You’re Not a Straight White Man) does something Hollywood rarely does — it allows people from diverse backgrounds to tell their own stories.

And in another Washington Post story, Dan Zak goes behind the numbers to note, for example, that Denzel Washington and Morgan Freeman account for a quarter of all nominations for African-Americans.

Other kinds of exclusions are also being raised. A transgender nominee is unhappy that her nominated song is being excluded from the show. I was glad to see that stunt creators are seeking recognition by the Oscars. With movies like “Mad Max: Fury Road” nominated for Best Picture, it is long past time to recognize stunt coordinators’ work in telling the stories that audiences find most compelling.

And even the insiders are getting tired to the promotional bonanza that is the “swag bags” given to some nominees and all of the presenters, most of whom are already vastly wealthy. With the current market value of $230,000 for items including first-class travel (a $55,000 trip to Israel in this year’s bag has already sparked complaints from Palestinian groups) and electronics, the Academy is fighting to have its logo and implied affiliation removed from the press releases.

My friend Nell Scovell has the most thoughtful assessment. She does not try to pretend to understand all the concerns or have all the answers, but she raises some interesting questions about a range of issues of equality of opportunity to give everyone the right to do his and her best work. For example,

The Women’s Media Center (co-founded by two-time Oscar winner Jane Fonda) recently reported that in the past decade, women have received only 19 percent of all non-acting Oscar nominations. This year in cinematography, directing and editing, only one woman made the cut. This article makes the case that Sixel is the Imperator Furiosa of the editing room.

These are adorable! Some of them even have light saber heels, and the Chewbacca tribute shoes are furry. And the designer, Irregular Choice, has a sensational Alice in Wonderland (Disney version) selection as well.

Documentary: Becoming Bulletproof, the Story of Filmmakers with Disabilities

Becoming Bulletproof is the story of a movie-making group, many with disabilities, that gets together every summer in Vermont. The documentary about them is available now on iTunes and Amazon.

Seventy-five years ago, The Maltese Falcon was first released, the very first film from director John Huston (with his father, the distinguished actor Walter Huston, in a small non-speaking part for good luck). It was the third version of the story by Dashiell Hammett, and the second version, with Bette Davis in the second, Satan Met a Lady

. So if you ever want proof of the difference a director can make, you won’t get a better example than this one.

The title object is a priceless sculpture, encrusted with jewels, and the characters in the film are willing to lie, cheat, and murder to get the statue. The prop in the film (which — spoiler alert — turns out to be a fake) has inspired only slightly less passion from collectors. An entertaining article by Bryan Burrough in Vanity Fair tells the story of the fans who sought to own the “real” Maltese Falcon.

Lost to history for decades, it resurfaced in the 1980s in the hands of a Beverly Hills oral surgeon, and beginning in 1991 traveled the world as part of a Warner Bros. retrospective, with stops at the Centre Pompidou, in Paris, the Museum of Modern Art, in New York, and elsewhere. In 2013 it was offered for sale by Bonhams auction house. There was talk it might go for $1 million or more. But at the auction in Bonhams’s Madison Avenue showroom on November 25, 2013, the bidding quickly passed $1 million, then $2 million, then $3 million. Spectators gasped as a bidder in the audience dueled with one on the telephone, driving the price higher and higher.

Only when the bidding reached $3.5 million did the bidder in the crowd surrender, sending the Falcon to the man on the phone, who was later revealed to represent Steve Wynn, the Las Vegas hotel and casino billionaire. With the buyer’s premium, the total price came to a stunning $4.1 million. The crowd burst into applause. The auctioneers wheeled out a tub of champagne bottles to celebrate.

And with good reason. It was one of the highest prices ever paid for a piece of movie memorabilia, and two of the others were for cars: the original Batmobile, which had sold for $4.6 million earlier that year, and the Aston Martin Sean Connery drives in Goldfinger. News of the Falcon sale was carried on the network news and in newspapers around the world. Today it sits, along with a pair of Picassos, a Matisse, and a Giacometti sculpture, in a meeting room in Wynn’s Las Vegas villa.

That is the official version of what happened to the Maltese Falcon. But it is just one chapter in a complex tale. It turns out there is another, far stranger version, and another Falcon, several more in fact. And this version, which draws in characters as diverse as Leonardo DiCaprio and the woman butchered in one of Hollywood’s greatest unsolved murders, constitutes a real-life mystery every bit as bizarre as the one Sam Spade confronted on film.

The story deserves a movie of its own, and if it gets a director as talented as John Huston, it just might be a classic.