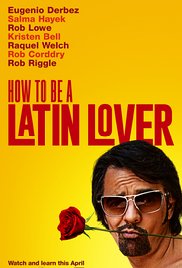 How to Be a Latin Lover

D
I like everyone connected with this movie so much that I am especially sorry to give it a bad review. Mexican star Eugenio Derbez is a wonderfully engaging performer with enormous warmth and charm, as we saw in “Miracles From Heaven,” where he played the doctor. The supporting cast includes Salma Hayek, Kristen Bell, Rob Riggle, Raquel Welch, Michael Cera, Michaela Watkins, Rob Lowe, and even Weird Al Yankovic. The director is the very funny Ken Marino (“Burning Love”). And it introduces a terrific young actor, Raphael Alejandro, who is the highlight of every scene he is in. But all of that talent cannot overcome a painfully unfunny script by Chris Spain and Jon Zack.

In the opening scene, a young brother and sister see their father drive into their house, creating an explosion that kills him and destroys their home. There’s a way to start a comedy!

This is an important lesson in the uncertainty of life, which the boy interprets as: Find a wealthy lover and be pampered for as long as you live.

As a healthy and handsome young man (played by Derbez’s very attractive young son), Maximo woos a wealthy, middle-aged lady (Renee Taylor). Twenty-five years later, Maximo (now played by Derbez) is living a blissful Richie Rich life, except that he has to sleep with a very old lady. A battalion of servants attends to his every wish, even turning his poolside lounger to follow the sun or turning the pages of his e-reader. He never even has to take a step: he glides through the mansion on a hoverboard. The most exercise he gets every day is reaching over to his wife every morning so he can put a mirror under her nose to see if she is still breathing. And maybe pointing to the new sportscar he says he is buying for her but is really buying for himself.

Unfortunately, the car salesman sells himself along with the car, and Maximo is out on the street with nothing but a faint memory of an ironclad pre-nup. He needs a new old lady to marry, and until then he needs a place to stay. Which is how he ends up knocking on the door of his sister Sara (Hayek), a widow with a young son, Hugo (Alejandro). Many slapstick encounters ensue, including a guy in a wheelchair getting hit by a car three different times, a tenderhearted girl getting shredded by her cats, but mostly about Maximo helping Hugo talk to Arden, the girl he has a crush on (Mckenna Grace of “Gifted”) so he can make a move on Arden’s rich grandma, played by Raquel Welch. Yes, let that sink in for a moment: Raquel Welch. Also, some guys want to beat him up but I don’t need to say why because you can assume that pretty much everyone is on their side by this point. I’m guessing you will be, too, when I explain that in addition to the wheelchair “joke,” it is also supposed to be humorous that Maximo removes a disabled character’s prostheses and that when he tries to dye his hair with shoe polish and dives into the pool, everyone things, well, you know what’s hard to tell from Shinola. I’d say the same for this screenplay.

Parents should know that this movie has material that pushes the limits of PG-13 with a lot of crude humor and comic peril and violence. There is very strong language, some to a child, alcohol, sexual references and situations, and “humor” about disabilities.

Family discussion: Was any of Maximo’s advice to Hugo worth following? Why did Maximo choose that career?

If you like this, try: “Stuck on You” and “Shallow Hal”

We mourn the loss of director Jonathan Demme, who died yesterday of cancer. A filmmaker of exceptional warmth, humanity, and range, his loss has been felt sharply, and it has been touching to see how many journalists and critics began their appreciations by talking about his kindness and courtesy as well as his award-winning films, including “Silence of the Lambs,” “Philadelphia,” “Rachel Getting Married,” “Something Wild,” “Handle With Care,” and “Married to the Mob,” along with documentaries and concert films like “Stop Making Sense” and “Neil Young: Heart of Gold.”

At rogerebert.com, Matt Zoller Seitz wrote about the music that was an essential part not just of Demme’s films but of the lives of the characters in those films. One of “Philadelphia’s” most striking scenes has an ailing lawyer played by Tom Hanks describing his love for “La Mama Morta.”

He had a musical performer’s spirit. It shone through all his movies, even when they weren’t officially about music. He never made an according-to-Hoyle musical where characters burst into song and dance, although he got reasonably close with the World War II romantic drama “Swing Shift,” about a riveter who falls in love with a musician, and 2015’s “Ricki and the Flash,” starring Meryl Streep as a rock and roller who abandoned her family to chase musical stardom. But there were points where all of his movies threatened to morph into musicals—even the nightmarish thriller “The Silence of the Lambs” and the earnest message picture “Philadelphia,” both of which feature scenes in which a leading character is seized by the spirit of the classical music he’s listening to and pretends to conduct it.

I loved the way Demme so clearly loved his characters, not just the leads but every single person who inhabited his films. May his memory be a blessing.

Looking for something a little different?  A little more challenging? A little artier?

Tribeca Shortlist is a premium subscription video on demand service with a mission to bring discerning movie lovers a new streaming destination – powered by human curators – for discovering and enjoying great films. Tribeca Shortlist features a high-quality collection of handpicked films that are recommended by popular actors, directors, insiders and influencers who know and love movies.

We’re taking a more human approach to movie discovery for viewers who want to escape the “search spiral” and find a great movie fast. We focus on great movies, offering subscribers a high-quality, curated movie catalog and our exclusive ‘Shortlist’ content, which provides context and personal insight, like getting a recommendation from a trusted friend.

Every film in our collection is handpicked by industry experts and includes major studio release and independent studio gems, foreign film favorites and documentaries. The collection is constantly refreshed, with about a third of our movies changing each month.

For just $4.99/month, Tribeca Shortlist contains no advertising and is streamed to you wherever you feel like watching via your Samsung Smart TV, Roku, Apple TV, Fire TV, iPhone, iPad, Android or computer. You can also stream to your TV using Chromecast or AirPlay.

Trailer: The Exception, a WWII Drama with Christopher Plummer and Lily James

Christopher Plummer, Jai Courtney, and Lily James star in “The Exception,” a WWII story about a German soldier who must determine if the Dutch resistance has planted a spy to infiltrate the home of Kaiser Wilhelm in Holland. It is available exclusively on Direct TV on April 27 and in select cities June 2, 2017.

We are delighted to present this exclusive clip from “Breaking Legs,” a teen dance competition movie (starring real teens, not actors in their 20’s pretending to be teens). It’s available now on VOD and DVD.

When new-to-town freshman Bloom meets her classmate Harmony, it’s loathing at first sight. Bloom just wants to dance, but the only place to strut her stuff is the school dance team…captained by none other than the number one mean girl herself. When Harmony’s boyfriend falls for Bloom, what starts out as unfriendly competition quickly becomes an all-out war. Bloom’s only shot at her chance to fit into this new school and get on the dance team is to win the Honor Girl top prize. But not even her best friend or her uncle – who is trying to contend with his boss – can help her. And Harmony won’t concede the competition or her boyfriend without a fight!

“Breaking Legs” stars Liv Southard (“Good Enough,” “Horror Haiku”) as Bloom, a high school freshman who has just moved to a small town where the only place to dance is the school’s dance team. Alexa Sutherland (“Sweet/Vicious”) plays the role of Harmony, Bloom’s nemesis, who is willing to go to any length to keep her biggest competitor off the team.

Writer/Director and choreographer Mark Marchillo says: “Breaking Legs is a fun, funny and quotable movie that teens and tweens will relate to. We thought it important that the film’s characters ring true, with teenage actors playing their real ages. It’s a kick-up-your-heels kind of entertainment, with a lot of heart for every age. I hope everyone enjoys Breaking Legs as much as we enjoyed making it.”