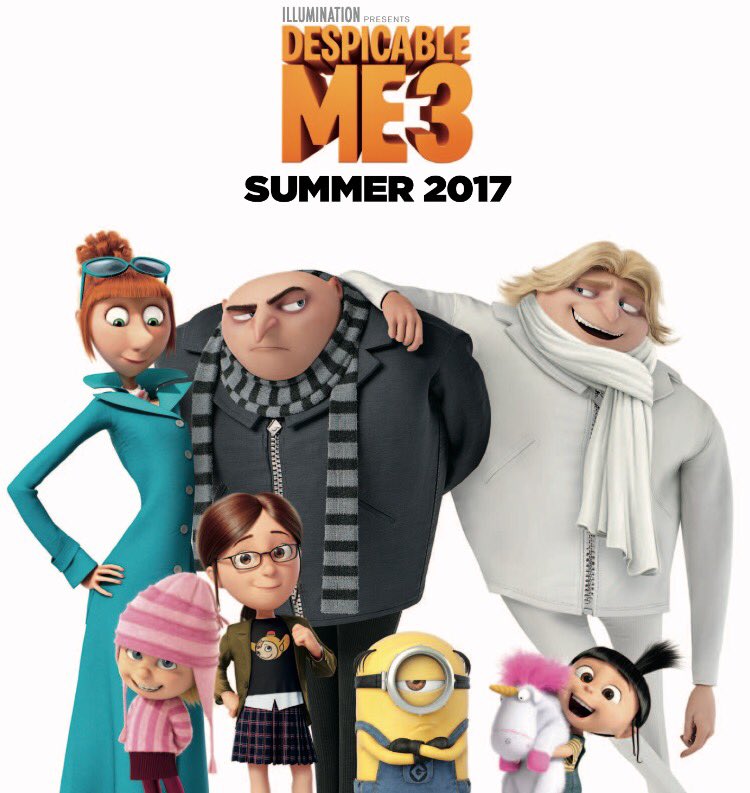 B
It does not achieve the delirious delight of the first in the series, but it is better than the second. “Despicable Me 3” is meandering and uneven.

The problem with making the title character into a happily married good guy who loooves his three girls is that he is not despicable any more. He is therefore much less interesting than the actually despicable villain of the movie, Balthazar Bratt (Trey Parker, co-creator of “South Park”), an 80’s child star embittered because he has been forgotten. Whenever Bratt is not on screen, the film deflates. It is a cute, fun, and sweet-natured family treat, but overstuffed at just 90 minutes with too many distracting detours.

Gru and Lucy stop Bratt from stealing the world’s largest diamond, but he gets away, and the new, very ambitious, head of the AVL (Jenny Slate) fires Gru. Lucy quits in protest. As they begin to think about finding new jobs and Agnes sells off her beloved fluffy stuffed unicorn to help out, Gru finds out for the first time that he has an identical twin brother. “Parent Trap” style, when their parents split up, they split the babies up, too. An emissary from Gru’s brother, Dru (also Carell) invites them for a visit to Freedonia, presumably the country responsible for their accents and certainly the country where the Marx Brothers created memorable mayhem in “Duck Soup.”

Dru is identical to Gru except for luxuriant blond hair. And it turns out he wants to be despicable, like their late dear old dad. The brothers go for a wild joyride in Dad’s crookmobile. Bratt has now successfully stolen the world’s biggest diamond, and so Gru tells Dru they will steal it from him. Dru thinks they will keep it, but Gru plans to return it so he and Lucy can get their jobs back.

Meanwhile, the minions are performing Gilbert & Sullivan on a TV reality show and being thrown in prison. Lucy is still not sure how to connect to the girls. Agnes thinks she can find a unicorn. And Bratt is getting ready for the ultimate revenge on the Hollywood that rejected him.

The film flags whenever Bratt is off-screen. He is an inspired creation, with lots of 80’s references for the parents and just the right touch of whiny entitlement to seem quite timely. He just about makes up for the slow patches. The snatches of the terrific Pharrell Williams score from the first film serve as a reminder that this, too, is mostly just an inferior copy, we hope, the last.

Family discussion: Why didn’t Lucy know when to say no? What made Margo trust her? Why did Gru’s parents tell their sons they were disappointments?

If you like this, try: the other “Despicable Me” movies and “Megamind”

Beguiled — The Male and Female Gaze

The best way to see Sofia Coppola’s “Beguiled” is to pair it with the original version, starring Clint Eastwood and directed by Don Siegel. Her film is really in conversation with the 1971 version. Both are the story of a wounded Union soldier who disrupts the lives of the women at a sheltered Southern boarding school in the midst of the Civil War. Each reflects its time as well as its director. Don Siegel directed such testosteronic classics as “Dirty Harry” and “The Killers.” In his version, the schoolmistress played by Geraldine Page is a bit unhinged (she had an incestuous relationship with her brother). The sudden arrival of a man (a literal enemy) is profoundly unsettling to all of the women but the implication is that the absence of men put them on the brink.

One reason Sofia Coppola decided to do a remake for the first time was to tell the story from the perspective of the women, and that has provoked some especially thoughtful commentary. In her version, the women are generally stronger and more resilient. Coppola’s decision to omit a slave character has drawn some criticism, but she said that she could not do justice to the character and that she wanted the girls and their teachers to feel abandoned and to be forced to learn to take care of themselves.

Ms. Coppola said that she did not give any thought to a female gaze, but that she did see differences in how she and Siegel handled the same material. “Siegel told his film from a male perspective of a guy surrounded by crazy women. I tell mine through the filter of women’s frustrated desires,” she said in a phone interview this month. She recalled that when Anne Ross, her frequent production designer, suggested that she watch the 1971 film, at the end the director thought, Let’s tell the women’s side of this. In Siegel’s version, the women are cast to type as slut, spinster, servant and so on, as if they represented the spectrum of female humanity. Ms. Coppola, who unlike Siegel is not judgmental about female sexuality, has more developed characters for the women.

On Rogerebert.com, Susan Wloszczyna writes about both versions, frankly admitting that she prefers the first.

I gave a pass to the Sunday-best sort of clothes that his keepers wear to impress McBurney, which are somehow crisp and wrinkle-free in such humidity. But then Coppola has the seven females don satin ball gowns with perfectly braided hair and fancy ribbons while serving a sumptuous Michelin-star worthy feast to the soldier on fancy china and crystal. Weirdly, we get to witness one of the younger students don a corset Scarlett O’Hara-style when she clearly doesn’t need one. Perhaps, by this time, the director can get away with such a fantasy sequence that feels like a War Between the States-themed prom.

In my interview for rogerebert.com, “Baby Driver” writer/director Edgar Wright talks about how the songs he picked shaped some of the most intense and brilliantly choreographed action scenes of the year and where Baby (Ansel Elgort) got his endless supply of sunglasses and mp3 players.

The songs inspired the movie and some entire scenes are completely dictated by the music. Songs actually dictate what the action was. ‘Bell Bottoms’ is a good example because it has maybe two and a half minutes of buildup to where the actual rock really kicks in. I listened to that track about 22 years ago and straight away thought: ‘Oh, this is the guy sitting outside. The other guys have gone into the bank and then while he’s singing along with the music he is looking at what’s happening in the bank. And then they get out and that’s where the chase starts. The song has these amazing little anchor points of where hero moments are going to happen. 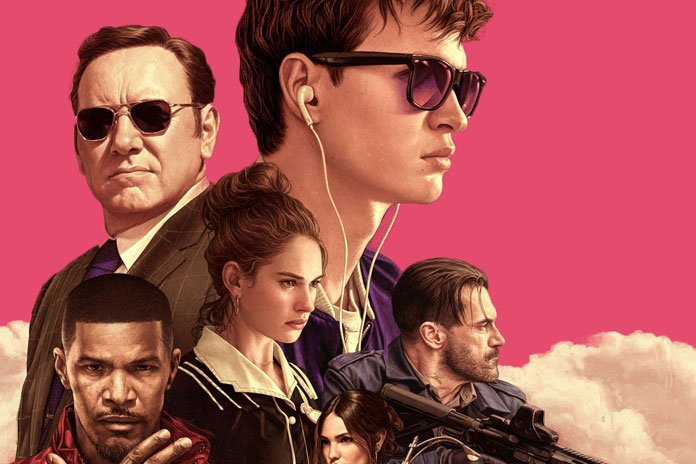 Fasten your seatbelts. This one is pedal to the metal all the way home.  “Baby Driver,” written and directed by Edgar Wright, hits you like a jolt of nitrous oxide shot with adrenaline concentrate, Red Bull, electrical current, and rock music.  The first time you see it, it will leave your eyes spinning like pinwheels.  The second time you will begin to appreciate that it is more than a joyride.

Ansel Elgort (“The Fault in Our Stars”) plays Baby, who works for a crime boss named Doc (Kevin Spacey).  Orphaned at age seven when his parents were killed in a car crash that left him with tinnitus, a persistent ringing in his ears, Baby is constantly listening to music via earbuds plugged into an endless collection of mp3 players.  The brilliantly curated playlist we hear is only what he is listening to, and it ranges from the The Jon Spencer Blues Explosion to T Rex, the Beach Boys, Dave Brubeck, David McCallum (that’s either Ilya Kuryakin of “The Man from UNCLE” or Ducky from “NCIS” depending on how old you are), and Beck, to the Simon and Garfunkel song that gives the film its title.

Baby began stealing cars when he was still a child and became beholden to Doc.  Now, he drives the getaway car for the teams Doc brings together for robbery and mayhem.  Doc calls him “Mozart in a Go-Kart.” And Baby is counting down the jobs and the dollars until he and Doc are square and he can go.  But he is just too good for Doc to give up, and once the debt is paid, Doc finds other ways to apply pressure.

Baby seldom speaks to anyone, except for one person who cannot hear, his foster father, Joe (CJ Jones), who is deaf and in a wheelchair.  Their exchanges in sign language are warm and familiar in sharp contrast to his subdued presence with Doc and the criminals.

And then Baby meets Debora (Lily James of “Cinderella”), a waitress at the diner.  And then Doc tells him that their relationship is not over.

Each action sequence is meticulously matched to the songs Baby plays — at one point, when there is a setback he literally stops to rewind because he times the chases to the music.  But each action sequence is also a part of a narrative arc.  With the first, Baby is literally outside the crime, waiting in the car (and bopping along to “Bellbottoms”) as the gang robs a bank.  They come running out and he drives the getaway car so fast that they, well, get away.  The next one gets more intense as he cannot pretend he is not a part of something lethal. Each time, he gets more involved.  The sunglasses he wears all the time get broken and he cannot pretend not to see.  He can drive others to escape the consequences of their actions, but can he do that for himself?

The sizzling all-star cast includes Jon Hamm and Eiza González as a seedy but fearless couple with matching “hers” and “his” tattoos on their necks, Jamie Foxx as the trigger-happy and appropriately named Bats, along with Flea and Jon Bernthal as other members of Doc’s crew.

Wright has the flair of Quentin Tarantino in balancing comedy, romance, action filmed to be both balletic and terrible, and increasingly visceral threats.  But he has more sincerity, more heart. “Baby Driver” is cool as in appearing effortlessly accomplished, but not as in remote or removed.  His moral and unabashedly romantic center is in the driver’s seat.

Parents should know that this is a very violent film with many chases and shoot-outs.  Characters are injured and killed and there are disturbing and graphic images. It also includes very strong language and drug references.

Family discussion: Why was Baby called Baby?  Why did Doc change his mind? Is the ending real or imaginary?

If you like this, try: “Scott Pilgrim vs. the World” and “The Transporter”

Chadwick Boseman (“The Black Panther”) plays a young Thurgood Marshall in this film, coming to theaters in October. His co-stars include Josh Gad, Kate Hudson, and “This is Us” star Sterling K. Brown.