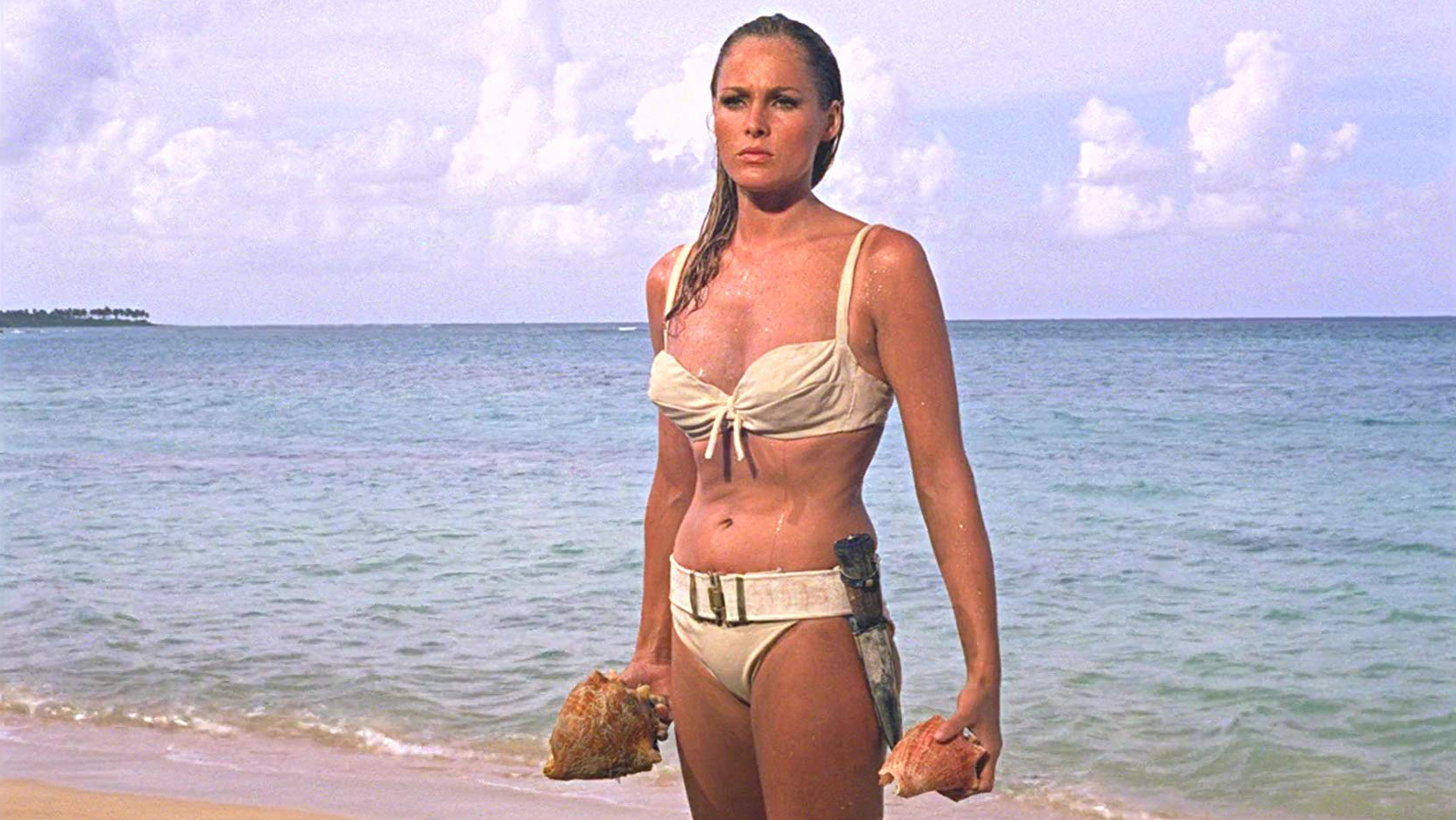 Hollywood Treasures Auctioned This Week by Profiles in History 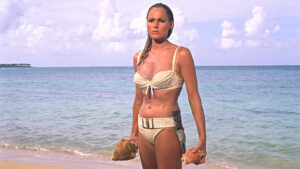 Movie fans will love this catalogue from the latest Profiles in History auction of Hollywood costumes and props. Would you like to have one of the Munchkin costumes from “The Wizard of Oz?” The iconic white Ursula Andress bikini from “Dr. No?” The special Oscar presented to silent movie director Mack Sennett or the prop Oscar “won” by Bette Davis’ character in “The Star?” Costumes worn on screen by Groucho Marx , Errol Flynn, or Humphrey Bogart?  Or Vivian Leigh and Clark Gable costumes from “Gone With the Wind?’

There are TV goodies, too, with a Tina Louise (Ginger) costume from “Gilligan’s Island,” a Sally Field habit from “The Flying Nun,” Urkel’s jacket from “Family Matters,” and a Fred Gwynne costume from “The Munsters.” There’s a model of the Ingalls’ home in “Little House on the Prairie” and Mork’s spaceship egg from “Mork and Mindy.”

If you’ve got room in your garage, you can get Luke Perry’s Porsche from “90210” or Boss Hogg’s Caddy from “The Dukes of Hazzard.” And if you’re feeling like a little magic, you can get “I Dream of Jeannie’s” bottle, though there’s no guarantee of any wishes. Same with Thor’s hammer and Wonder Woman’s lasso.

If you are a successful bidder, let me know!

And coming up next, the Rudolph the Red-Nosed Reindeer collection! 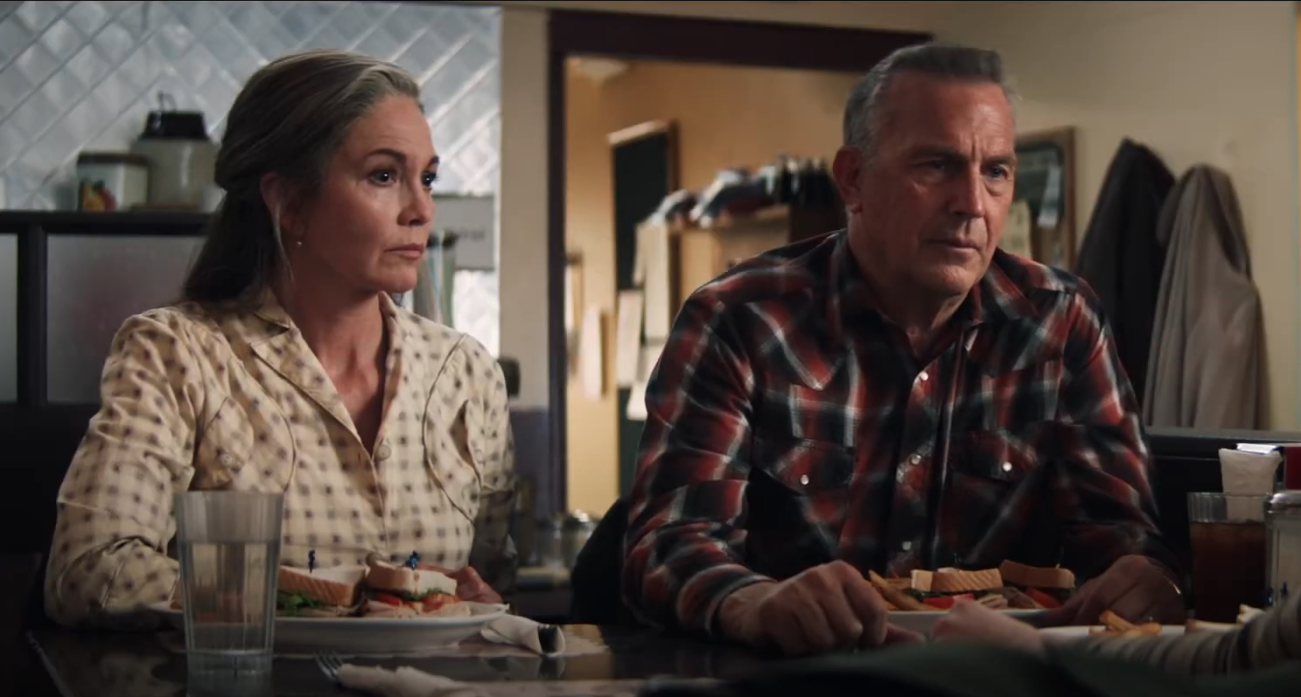 B +
We think George (Kevin Costner) and Margaret (Diane Lane) Blackledge are dressing for a funeral. In the first moments of “Let Him Go” their adult son was killed in an accident on their farm, and their expressions and clothes are somber. But it is three years after their son’s death and they are dressing for a wedding, not a funeral. Lorna (Kayli Carter), the widow of their son James and the mother of his now-three-year-old son Jimmy, is getting married to a man named Donnie Weboy (Will Brittain) and leaving their farm to live with him. They reassure themselves that they will still see Jimmy. But then Margaret sees them when they don’t know she is there, and Donnie hits Lorna. And then, without any notice, Donnie, Lorna, and Jimmy disappear. He has gone home to his family, leaving no way to contact them. It is the 1960s, and it was easier to hide in those days, whether from grandparents or from law enforcement.

Margaret decides to go after them, to bring Jimmy home to live with them. George agrees to go along, but he does not think they can get Jimmy away from his mother and his new family. He wants to give Margaret a chance to say goodbye.

“Let Him Go” is based on a book by Larry Watson, adapted by writer/director Thomas Bezucha. He makes great use of the majestic scenery of the northwest, especially when George and Margaret encounter a lone young Native American named Peter Dragswolf (Booboo Stewart). Just as in the classic westerns, the landscape emphasizes the opportunity — and the dangers — of a world where there is so much land and people are so isolated.

Lane and Costner, who played a couple in two Superman movies, have an easy chemistry that makes us believe there is a long history between them. Neither George nor Margaret say much, in part because they know each other so well there is little more to say, and that includes understanding that there is no point in trying to persuade each other on issues that they know too well will never be resolved. “Sometimes that’s all life is, a list of what we’ve lost,” George says. But Margaret is not going to give up.

Bezucha knows how to create tension, even with seemingly simple comments or undramatic settings, which only adds to the sense of dread. You don’t find a Weboy, a relative tells them. “You let it be known you’re looking for a Weboy. They find you.”

And they do, at a place so far off the map they could never find it without being led by Donnie’s uncle. They are invited to dinner by Donnie’s mother Blanche, played by the unsurpassable Lesley Manville, in one of the year’s best performances. She can make the offer of pork chops sound ominous. And she does. She rips into the role and is absolutely electrifying. And terrifying.

Two solid citizens up against a family of feral outlaws, an updated western with good guys and bad guys leading to an intense and violent battle. The set-up is conventional, but the direction and performances make it memorable.

Parents should know that this film is an exceptionally tense thriller with peril, abuse, and violence that includes guns, an ax, and fire. Characters are injured and killed.

Family discussion: Why did George and Margaret have different ideas about what they wanted to get from finding Jimmy? What do we learn from Peter’s story?

If you like this, try: “The Lookout” and “The Highwaymen”