A Night to Remember — The Other Titanic Movie

On the 100th anniversary of the sinking of the Titanic this week, I want to recommend the other Titanic movie, “A Night to Remember” with Clifton Webb.

And here is the striking memorial in Washington DC, put up by the women of America in honor of the men who died so that women and children on the ship could be saved.  Many thanks to photographer Ron Cogswell for granting permission to use this image via Flickr. 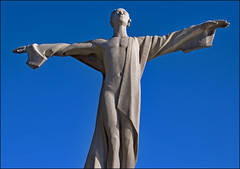 In honor of the birthday of one of the greatest novelists of all time, Masterpiece on PBS has announced two new series based on Dickens novels:   A new “Great Expectations” miniseries starring Gillian Anderson as Miss Havisham begins April 1 and “The Mysteries of Edwin Drood,” based on Dickens unfinished last book begins on April 15.

Now is a great time to catch up on the books and watch some of the dozens of movies they inspired.  Dickens books are gloriously cinematic, filled with rich detail, fascinating characters, and brilliant dialogue.  I’ve already written about my favorite versions of A Christmas Carol.  Some of the best adaptations of other Dickens books include:

The Life and Adventures of Nicholas Nickleby

Roger Rees stars in this stunning Royal Shakespeare Company version of Dickens’ story of a poor brother and sister making their way despite the cruelty of their rich and powerful uncle.  This is a nine-hour version of the live performance that mesmerized audiences in London and New York.  There is also a 2003 movie version with Charlie Hunnam, Jamie Bell, Anne Hathaway and Nathan Lane.

An orphan with a mysterious benefactor loves a girl who has been trained never to love.  The David Lean-directed version with John Mills and Jean Simmons is hauntingly beautiful.  Simmons later starred as the elderly Miss Havisham in a 1991 miniseries.  And there is a new version coming out later this year with Ralph Fiennes and Helena Bonham-Carter.

The BBC miniseries about a decades-long lawsuit that destroys a family stars Gillian Anderson as the chilly but mysterious Lady Deadlock.

A Tale of Two Cities

A best picture Oscar winner, “Oliver!” is a glorious musical adaptation of Dickens’ story about an orphan taken in by a thief.  Disney also did an animated version with animals called Oliver and Company

I have previously published a list of movies about famous historical figures for Black History Month, and all of those movies are well worth watching.  In addition I suggest some movies that are themselves a part of the history of African-Americans as well as a part of the history of movies and of American culture. While some of these films reflect the racism of their era, they give us a chance to see some of the finest performers of the 20th century — and to talk about what their experience was like and about what has and has not changed.

This was the first all-black movie made for a mainstream audience by a major Hollywood studio. While its script is lightweight at best, it is still a wonderful opportunity to see some of the most significant performing artists of that era, including Ethel Waters, Lena Horne, and Louis Armstrong. It was the also the first film directed by Vincente Minnelli.

As with “Cabin in the Sky,” the reason to see this film is the chance to watch legendary greats like Lena Horne, Bill Robinson, Cab Calloway, and the astonishingly athletic Nicholas Brothers.

3. Lilies of the Field

Sidney Poitier became the first black man to win an Best Actor Oscar for his performance in this wonderful film about a handyman who builds a chapel for a group of German nuns.

4. Gone With the Wind Hattie McDaniel became the first African-American performer to win an Oscar for her role as Mammy in this grandest of epics. Relegated to playing maids (and in this movie a slave), Ms. McDaniel brought to each of her roles a dignity and grace that is all the more extraordinary considering the bigotry that she faced on and off screen.

Black cinema exploded during the 1970’s and this documentary about the “blaxploitation” era has a sympathetic but clear-eyed assessment of the strengths and weaknesses of these films.

The “blaxploitation” era began with a film called “Sweet Sweetback’s Badasssss Song,” a raw, confrontational film made by Melvin Van Peebles about a powerful man who defied “the man” to live by his own code. His son Mario Van Peebles wrote, directed, and starred in this film about how it got made.

7. Do the Right Thing

President and Mrs. Obama saw this incendiary movie on their first date. It is a brilliant film and it has become a cultural touchstone. It is a tough, smart, and very provocative film that included an electrifying moment when the character played by Lee himself held up a trash can and aimed it at the glass window of a pizzeria owned by an Italian named Sal (Danny Aiello). People are still arguing about what happened next.

8. Precious: Based on the Novel Push by Sapphire

One of 2009’s top films is a searing story of a hideously abused girl, inspired by the lives of the students taught by author/poet Sapphire. Like any provocative story, it has been controversial and some have called it exploitative. But it is a heartfelt story, beautifully performed.

9. The Princess and the Frog

Disney’s first African-American princess story is one of the studio’s best, with an endearing heroine and a rollicking score.

10. Diary of a Mad Black Woman

Tyler Perry has quickly become one of the most powerful forces in entertainment, with successful theater, DVD, television, and movie productions. The success of his first theatrical release took Hollywood by surprise — they still do not understand the power of stories that come from the African-American experience without going through the filter of the studio “experts.” This film has Perry’s unique mash-up of high drama, low comedy, romance, spirituality, and of course the indomitable Madea played by Perry himself.

I’m always excited about another version of The Three Musketeers

As we wait for this acrobatic remake from the director and star of “Resident Evil,” we can revisit some of the best of the previous versions.  Here’s Gene Kelly showing off his athletic skill in one of the sword fights from the 1948 version.

I’m not a fan of the 1993 version with Charlie Sheen and Chris O’Donnell.  My favorite is still the sumptuous and unbridled 1973 version directed by Richard Lester.

For Easter: The Gospel According to St. Matthew and more

Reposting for Easter — Have a blessed celebration, everyone!

is the traditional Easter classic, but there are some other films that beautifully illuminate the themes of this holy season. I like The Gospel of John

, a very reverent re-telling of the story of Jesus. The rock musicals Jesus Christ Superstar

can be very inspiring. But I have a special fondness for The Gospel According to St. Matthew

, the understated, intimate re-telling of the story filmed by Pier Paolo Pasolini.

For kids, the Veggie Tales have the delightful ‘Twas the Night Before Easter. And while it does not have much to do with Easter beyond the title song, Fred Astaire and Judy Garland make “Easter Parade” a family classic everyone will enjoy.