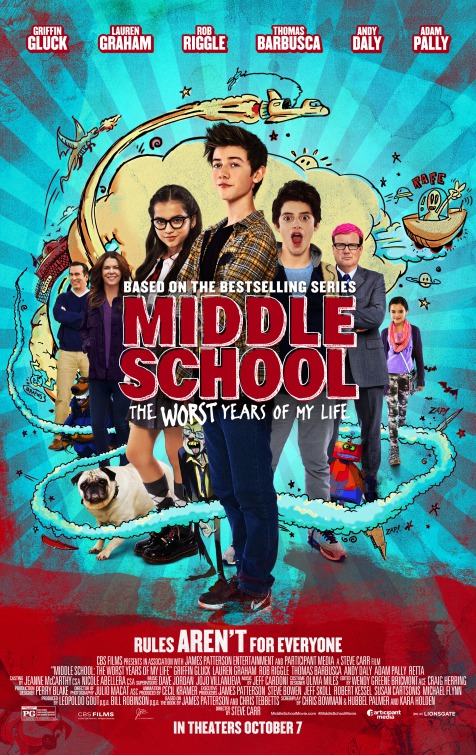 Middle School: The Worst Years of My Life

This just might be the most accurate movie title of all time. Middle school is pretty much the worst years of everyone’s life. Terrible stress and tragedy happens at all ages, but it is the years from 12 to 14 where the internal turmoil and agonizing uncertainty are so acute that we still wince remembering them decades later. This film, based on the series of books by mega-bestselling author James Patterson (with Chris Tebbetts and illustrations by Laura Park) has some delightfully satisfying moments of fantasy revenge against a tyrannical, rules-obssessed principal and a borderline-abusive potential stepfather. But it sneaks in some quietly touching and surprisingly wise insights about loss and working with a “new normal.” Bright direction and an exceptionally engaging cast of kids make this film a genuine fall family treat.

Rafe Khatchadorian (Griffin Gluck) has been expelled from two schools (we never find out why) and has just one more chance. He would rather stay home all day and draw pictures in his notebook, where he has created a whole world of monsters and aliens, charmingly animated. “There’s a big world out there,” Rafe’s mother (Lauren Graham) tells him. “There’s a big world in there, too,” he says. And it is clear that is the world he prefers.

He does not even make it inside the building, though, when he meets the new school’s Principal Dwight (Andy Daly), who cares about just two things: his rules, and the school’s test score ranking. Dwight’s rules basically outlaw anything that is fun, friendly, expressive of individuality, or likely to keep the school from the #1 test score ranking Dwight cherishes so deeply that he has cultivated a number 1 bush by topiary in front of the school. Dwight’s consigliere/enforcer is Ida Stricker (“Parks and Recreation’s” Retta). So, bright, patterned shirts, talking in the hallways, even drawing in a notebook — all banned. There’s also a school bully who threatens to give Rafe “a wedgie so bad you’ll be able to taste your underwear.”

But there are three bright spots. Rafe’s best friend, Leo (Thomas Barbusca), is always there to make him laugh and spur him on. There’s a friendly girl named Jeannie (Isabela Moner), and a kind, sympathetic teacher (“Happy Endings'” Adam Pally) who uses the Drake and the Wu-Tang Clan to teach the class about macroeconomic trends. Rafe decides to take on Dwight by breaking every rule, with Leo’s help. Meanwhile, Rafe’s mom is getting serious with the boyfriend Rafe and his sister call “Bear” (Rob Riggle in his usual role of a walking Axe body spray).

The revenge fantasy is funny and satisfying, mostly about making the pompous Principal Dwight look silly. And it gives Rafe a way to begin to make new friends, to resolve issues with the school bully, and to think through the other problems in his life.

The film is bright and fun, like its sparkling soundtrack of pop songs. The young actors are refreshingly natural and Barbusca has great comic timing. Rafe’s sister Georgia (Alexa Nisenson) and love interest Jeanne (Isabela Moner) are real characters, smart and capable. When the more serious issues arise, it is organic and sensitively handled. The pranks are signed RAFE, which stands for “rules aren’t for everyone.” But this movie is.

Family discussion: What is the best way to challenge unfair rules? What school rules would you like to change?

If you like this, try: “Harriet the Spy,” “How to Eat Fried Worms,” and the book series that inspired the film

Related Tags:
Based on a book Comedy Coming of age DVD/Blu-Ray Pick of the Week Family Issues School Stories About Kids Tweens

Women You Should Know ran an article comparing the covers of Girls’ Life and Boys’ Life Magazines. The girls’ magazine touted articles like “Wake Up Pretty,” “My First Kiss,” and “Your Dream Hair!” The magazine for boys had articles about learning and adventure.

I loved the follow-up article, where graphic designer Katherine Young created a better version of the Girls’ Life Magazine cover, featuring, instead of a model, the real-life Google Science Fair Grand Prize Winner Olivia Hallisey, with article tiles like: “Girls Doing Good,” “Your Dream Career,” and “My First Miss” (about overcoming mistakes and setbacks).

I know magazine revenues come from advertisers, but surely there are some companies out there who want to sell girls technology, books, and sporting equipment, not just makeup and clothes. Our girls deserve better.

The first film to be based on the work of best-selling author and spiritual teacher Eckhart Tolle is “Milton’s Secret,” a thought-provoking story about purpose, presence, family, and integrity.

Milton (William Ainscough) is a 12 year-old boy growing up in an economically and socially unpredictable world. His mother and father (Mia Kirshner, David Sutcliffe) are workaholics with marital and financial problems, and he is bullied at school. When his grandfather (Donald Sutherland) visits, Milton learns that rehashing the past and worrying about the future are preventing him from finding true happiness.

We are pleased to present an exclusive clip.

Related Tags:
Based on a book Teenagers Trailers, Previews, and Clips Tweens

is now a movie!

An App to Teach Tweens About Online Safety

Common Sense Media has developed Digital Compass to help tweens learn about safety, privacy, and “digital citizenship,” as they begin to go online by themselves and get their first smartphones.

Designed by Common Sense for middle schoolers, this engaging game helps teach the valuable lessons that today’s kids need to thrive in our digital world. It’s an invaluable tool to open up the conversation around digital citizenship between parents and their (almost) teenagers to help kids think about the real-world impact of their online choices.

In this animated, choose-your-own-journey format set in a fictional town called Anywhere, players control their characters’ digital fates by making good and not-so-good decisions. Kids have the freedom to safely experiment with the impact of their choices while keeping their real-life digital reputations intact. Kids will be faced with a number of challenges and lessons that explore safe sharing, copyright rules, and dealing with digital drama.

Go to DigitalCompass.org to get the app (also available in Google Play or the App Store