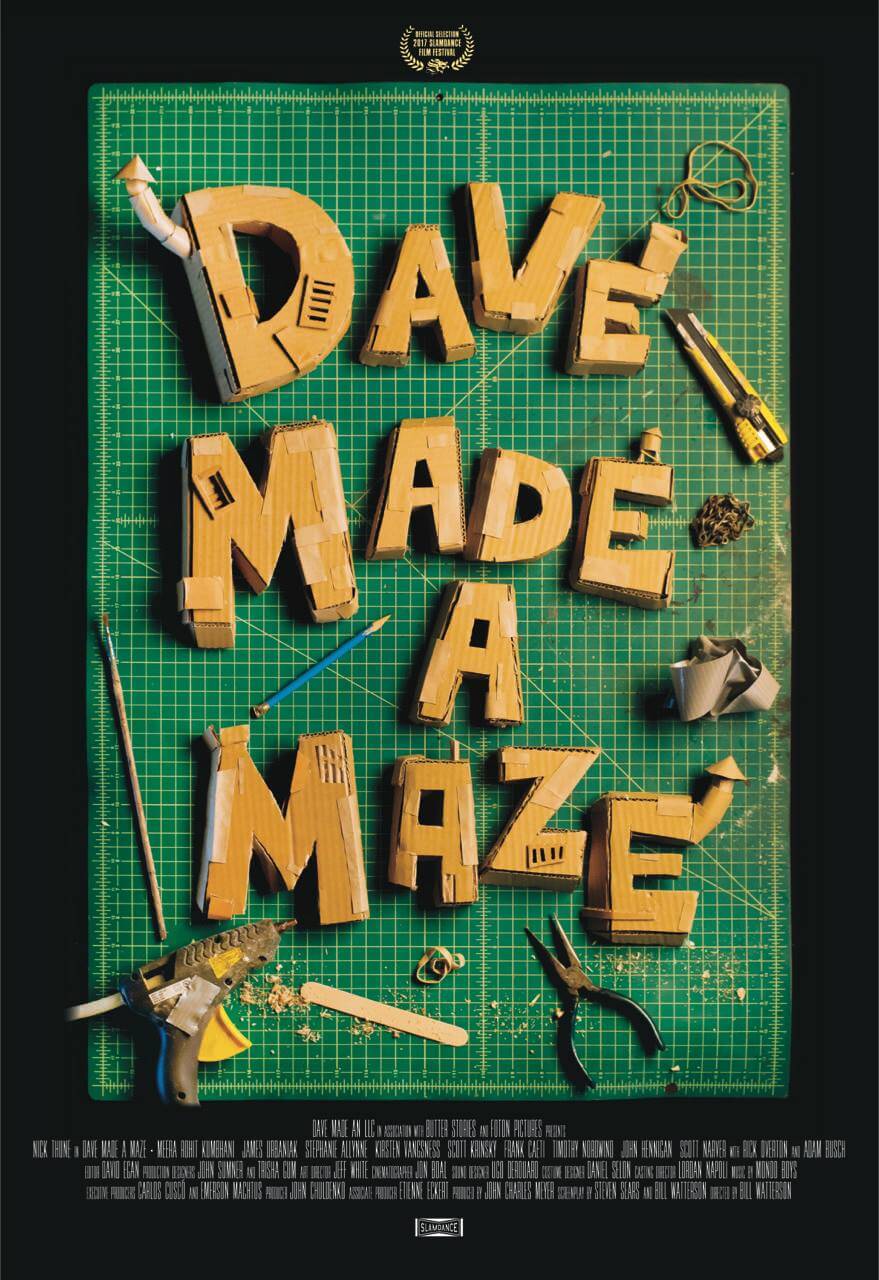 Dave Made a Maze

For generations, there have been children who have had more fun playing with the box than with the toy that came inside. The reason is easy to understand: a blank box puts no limits on imagination. It can be a clubhouse, a rocket ship, or a submarine, or all at once. It needs no batteries and there is no technology to break down. There’s no disappointing discovery that what looks cool on the commercial does not actually work. Cardboard can be anything and imagination can take you everywhere.

That is the theme of “Dave Made a Maze,” both the story on the screen and the story of the movie itself. Annie (Meera Rohit Kumbhani) comes home from a short trip out of town to find her boyfriend Dave (Nick Thune) has taken over their living room with a cardboard maze, or, rather, a labyrinth so intricate that he is literally lost inside it. Like the TARDIS, Dave’s construction is bigger on the inside. Annie grabs some friends and a box cutter and goes inside. A film crew led by their friend Harry (James Urbaniak) comes along to document (and sometimes shape) the adventure.

Co-writer/director Bill Watterson (not the Calvin and Hobbes cartoonist) has created a slacker/artisanal “Cat and the Canary” or “Ghost and Mr. Chicken,” a comedy/horror film with real stakes and deadpan delivery, all the funnier for being so understated.

The star of the film is unquestionably the maze/labyrinth itself. Production designers Trisha Gum and John Sumner, clearly having the time of their lives, worked with the genius artists of the Cardboard Institute of Technology to create an endlessly inventive world, enchanting, spooky, hilarious, and, when you don’t expect it, pretty scary. Just because the blood is made of yarn and paper, we learn, does not mean it is not real. On the other hand, one labyrinthian portal somehow turns the characters into paper bag puppets, a transformation which thankfully turns out to be temporary. Dave’s maze, a manifestation of his frustration at not having a job that fulfills him, turns out to have a malevolent sentience he and his friends have to battle. Having different artists work on different rooms and corridors adds to the continuous surprise and disconnect, with one section looking like a mock-up from “2001,” another sporting origami birds, and others playing with perspective and space. I was especially taken by the intricate cardboard mechanics underneath one space, with several others hinting at an even more expansive and complex cardboard world.

Part of the film’s charm is the way Annie and Dave’s friends immediately accept the premise and just go for it. But what makes this one of the most imaginative films of the year is the way it makes a virtue of its micro budget. Like Dave himself, the filmmakers have found what the cheapest materials can do better than the most sophisticated animation equipment. They’ve created a tactile environment that puts no limits on their imagination or ours.

Parents should know that this film has very strong language, fantasy peril and violence, a monster, and characters who are injured and killed.

Family discussion: Which was your favorite room in the maze? Why did the maze get out of control?

If you like this, try: “Safety Not Guaranteed” and “Coherence” 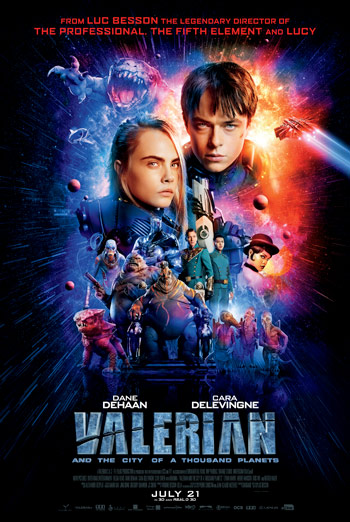 Valerian and the City of a Thousand Planets

B +
Yes, the visuals and special effects in Luc Besson’s “Valerian and the City of the Thousand Planets” are next-level, dazzling, stunning, and themselves worth the price of a ticket (3D please). But let’s be honest. The best special effect in the movie is the lovely real face of Rihanna as Bubble, a shape-shifting alien our hero meets in an inter-galactic strip club.

That hero would be Valerian (Dane DeHaan), who has gone to the strip club in search of the disguise he needs to infiltrate an alien compound and rescue the woman he loves, his space partner Laureline (Cara Delevingne). She was captured as the two of them were on a mission to…oh, who cares what the mission was? It’s your basic save the universe stuff. You know and I know and they know you are not there for the subtleties of the space city that incorporates, “Zootopia”-style, every possible creature and culture, a veritable Pepperland of comity and the exchange of learning. In the opening scenes, we see the history of the place, as human astronauts welcome aboard an increasing variety of visitors with a warm handshake, first from other countries, and then from other planets and galaxies, still with something as close to a handshake as possible.

This is the movie Luc Besson has wanted to make since he was a teenager, base on a French comic book series from the 1960’s with a visionary aesthetic that inspired Besson’s own “5th Element” and George Lucas’ “Star Wars.” He had to wait decades until the technology made it possible to do the ravishing visuals justice. That is the good news and the bad news. The good news is that the visuals are indeed ravishing, worth a couple of viewings on the biggest screen you can find and then a couple more when you can watch it at home and hit “pause” to see every detail. The bad news is that the storyline has not held up as well over the years as the settings, in part because much of it has also been appropriated, too, over the years, partly because times have changed, and partly because it wasn’t that great to begin with. Valerian and Laureline banter back and forth about whether he can make a commitment to her as they try to save the world. It is supposed to be part of the fun of the story that they are cool and casual. Valerian even wears a Hawaiian shirt at one point instead of his spiffy spacesuit (they are undercover as tourists). But their characters are so bland, especially by contrast with the wildly imaginative world they are racing through, that it drags on the storyline. That’s disappointing because it distracts from some promising flickers of substance.

Family discussion: Why do Valerian and Laureline disagree about the converter? How do you know when to break the rules?

If you like this, try: “Avatar” and “The Fifth Element”

It’s better than “Cars 2,” but not as good as the first “Cars,” so it continues the saga of the second tier of Pixar movies.  Second-tier Pixar is pretty good. But this time the storyline is unlikely to be of much interest to children.  They’ll enjoy the race scenes (except for the ones that are too scary) and the silly humor.  But the theme of this film is the existential dilemma of an aging athlete.  While “Inside Out” and “Toy Story 3” addressed issues of growing older/up with infinite tenderness and sensitivity, “Cars 3,” with the help of generous samples of Paul Newman’s Doc Hudson character from the first film, has appropriated the plots of many of the “Rocky” movies, with now-champion Lightning McQueen (Owen Wilson) confronted with his own mortality.  I know; they’re machines, but apparently they have parents and childhoods and lifespans.

Lightning is beaten by a super-slick competitor dashingly named Jackson Storm (Armie Hammer), who looks like he is visiting from another Disney movie, “Tron.”  And there’s another blow.  Lightning has loved being sponsored by his friends at Rust-Eze, but the company has been sold and his new sponsor is the smooth, corporate Sinclair (Nathan Fillion), who tells him that if he does not win his next race, he has to stop racing all together.

But racing is all Lightning knows or cares about.  If he can’t race, who is he?

Sinclair has a very high-tech training facility that’s all about cybermetrics. Lighting is assigned a new trainer, Cruz (Cristela Alonzo), who is essentially a stopwatch on wheels.  Everything is about readouts and algorithms.  Lightning takes her out on the beach to show her what real racing is.  And he decides that his mentor, Obi-Wan Kenobi, I mean Doc Hudson, may be gone, but perhaps he can find Doc’s mentor, and gain some wisdom.

Lighting and Cruz end up competing in what they think is a race but what turns out to be a demolition derby (pretty scary for G).  They squabble and make up and Cruz confides that she once dreamed of racing.  They do find Doc’s old friends, led by Smokey (Chris Cooper) and his adorable sidekicks.

It has talking cars, and kids will like that. And it doesn’t have the bombast and over-complexity of “Cars 2.”  But it also does not have the heart we have come to rely on from Pixar, and if we feel disappointed, it is only because they have set the bar so high.

Parents should know that despite the G rating, this film has characters in peril including scary 3D car crashes and fire, many references to a sad death and to the challenges of aging, and a reference to unsupportive parents.

Family discussion: Why did Lou take other children’s toys? Who is your mentor and who can you help as Doc Hudson helped Lightning?

If you like this, try: the other “Cars” movies and “A Bug’s Life”