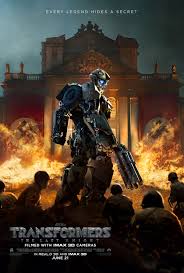 It is time to stop the madness. I only wish this was called “Knight: The Last Transformers Movie.” I am as happy as anyone to see robots transforming into cars and cars transforming into robots and I freely admit to tearing up once when it appeared that Bumblebee might have been mortally wounded. I’m very fond of Sir Anthony Hopkins, and I’m also very fond of Mark Wahlberg. But this big, loud, dumb, dull, nonsensical dud of a movie is two and a half excruciating hours long.

Wahlberg returns as inventor-turned-renegade Autobots protector Cade Yeager. The government has set up a special branch of the military to get rid of all of the transformers, making no distinction between the honorable Autobots led by Optimus Prime and the evil Decepticons led by Megatron. We see in a prologue set in the time of King Arthur that the Transformers go back more than 1000 years, when Merlin, who turns out to have had no magical skills at all, was given the “weapon of ultimate power,” a staff that enabled Arthur and the Knights of the Round Table to win some battle with the help of a pretty impressive three-headed dragon. The staff and an amulet that is somehow connected to it will be the McGuffins that everyone will be looking for despite the fact that we never really find out what they can do.

Sure, the stunts are fun, and I especially enjoyed seeing Wahlberg leap from drone to drone like he was a stone skipping on a pond. But without a clear idea of the stakes there is no heft to them; it’s just pixels.

And the dialog — I can’t say which is worse, the painful attempts at banter (there’s an intended-to-be cute but isn’t at all riff on the homonyms “chaste” and “chased”), the exposition-heavy portentousness (“Where in Hell is your so-called magician?” “He will be here, Lancelot.” “Why do we tell ourselves these stories? We want to believe we can be heroes in our own lives.” “Do you seek redemption?” “Only a direct descendant of Merlin can wield this instrument of immense power!”), or the faux meaningful (“You are more important than you can possibly imagine”). If someone has to be spouting off idiotic explanations, though, at least most of it is in the beautifully husky Welsh voice of Sir Anthony (though his character’s ripping a page out of an antique library book is the most disturbingly violent act in the film).

Not much makes sense in “Transformers: The Last Night.” I’m not talking about why a robot would smoke a robot cigar-type sense. We expect that going in. But why would a robot want to eat a car?
And I’m talking about the basic elements that are necessary to connect to what is going on. How do you kill a Decepticon? Sometimes robots blow apart and sometimes they just come back together like in “Terminator 2.” How do we know how we are supposed to feel if we don’t know what the impact/import of a hit is? That all-powerful weapon? We never understand what it can do and it doesn’t seem very powerful after all. What is the point of Tony Hale spouting off about physics? I will note that one completely deranged moment was actually quite fun, when a C-3PO rip-off (acknowledged as such!) turns out to be the source of the dramatic organ music in one scene: “I was making the moment more epic.” A bit more deliriously loopy stuff like that would have been a step in the right direction.

Parents should know that this film includes extended sci-fi/fantasy peril and violence with chases, explosions, swords, guns, and monsters. Human and robot characters are injured and killed. Characters use strong and crude language and there is some dumb sexual humor.

Family discussion: Does it matter that Cade is “chosen?” Which Transformer is your favorite and why?

If you like this, try: the other “Transformers” movies and the television series