is family film about a karate team of misfits, available on VOD and DVD July 7, 2015. Adam Irigoyen (Disney’s “Shake It Up!” and “Wizards of Waverly Place”), Ryan Potter (Big Hero 6, Nickelodeon’s “Supah Ninjas”), Cade Sutton (Disney’s “Kirby Buckets”), Mirelly Taylor (“Lost”), Patrick Fabian (“Better Call Saul”), Tom Arnold (Shelby, “Sons of Anarchy”) and Beau Bridges (“The Millers,” “White Collar,” The Descendants) star in the story of a struggling Mid-City Community Center’s karate team that loses their instructor a week before the big tournament. former MMA champ Jimmy “The Lightning Bolt” Lee (Rhee) returns to his old neighborhood and reluctantly agrees to train the misfit bunch. Despite the struggles they face, the washed-up fighter and group of urban underdogs bravely take on the undefeated Beverly Hills Junior National Karate Team in the ultimate karate showdown at Nationals, and learn confidence, courage and honor along the way. 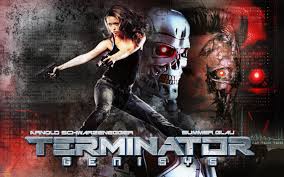 Lorne Balfe composed the score for “Terminator Genisys,” the fifth in the series, which takes place in three different time period, some very dystopian. He talked to me about creating a sound that conveyed the mechanistic themes and how he kept the music connected to the earlier films. “Some people may describe some of the melodies as noise but I think the whole score really is like envisioning what we’re looking at. It’s a hybrid score. We spent a long time in London recording with a fantastic orchestra. We also spent a very long, long time trying to create a sonic world that could represent the world of the Terminator.” He said it was “a great experience” to build on the iconic themes of the earlier films. “Especially coming from watching the classics, ‘Terminator’ 1 and 2; it’s a very iconic world, sound as well as visuals. It really is a total hybrid and a mixture of the orchestra world and electronics. There is obviously a nod to the past. There are the scenes that visually look the same. The very famous theme has one of the most iconic rhythms of all time, which we use. Being able to use that was a great experience, especially because I always remember it when I was young. Definitely, there are scenes in the film where if you’re a fan of 2 all of your senses will come alive. It’s also hitting the feelings of what you heard when you watched the original. A lot of films when it’s a franchise wants to make their own original concept and with the music, especially coming from a background of video games, the themes get forgotten about. But right from the beginning you know that you’re in a Terminator film musically. And then the story evolves. It’s a bit of a rollercoaster really.”

Balfe wanted the music to reflect the themes of the film in the way humans and machines are both integrated and oppositional. “The thing is that ironically, when I’m writing a score it’s based around the electronic world because you’re dealing with electronic samples of organic instruments. So you’re automatically beginning purely electronic and then yes, you’re coming up with different colors and textures, with a brass section or a woodwind section. You need to create the same colors with your electronics. So you start coming out of those elements and then you go and the real musicians and that then becomes organic. The other film haven’t ever really fully delved into the whole guardianship connection and the relationship between Sarah Connor and the guardian, played by Arnold Schwarzenegger. And with this I think we really wanted to try to emotionally get a piece of music that really could bond them together. That was a great kind of experiment and we ended up with ironically taking an ‘organicness’ of it but manipulating it because that’s exactly what their relationship is. It’s real and yet something’s not.”

He was brought into the film after filming, when the movie was being edited. “You sit there and it’s very like when you work on an animation and a lot of the detail is missing. So you’re still visually learning and seeing everything change right until the bitter end. It’s also like video games because you start a project and it’s not necessarily finished. The process is fascinating because it just evolves and changes every couple of days. You have to think ahead when writing because it’s all very well sitting there and you look at a green screen and you go, well that person is going to fight that person and there is nothing there sometimes. I can only imagine what it is like for an actor to have to do it because it must be difficult but musically, I in my head try to imagine what the end product is.

I asked him whether working on the film has made him more nervous about technology and artificial intelligence. “I have a long list of things that makes me nervous and that’s one of them. I think you now ironically when the world we kind of live in, I’m not going to go down it but I sat next to somebody in a meeting last week and they had a certain company’s new phone watch and it was monitoring how many times they had actually stood up for the day and done any exercise. So the whole concept of Big Brother has been around for a long, long, long time.”

NCIS star Cote de Pablo gives a behind the scenes look at the making of the Roma Downey/Mark Burnett produced miniseries, The Dovekeepers

, “The Dovekeepers” follows a group of extraordinary women whose lives intersect in a fight for survival. This clip is taken from the exclusive special featurette, “Taking Flight: The Dovekeepers,” about the making of the film and includes interviews with cast from the set, along with writer Alice Hoffman.

It is available on now on Blu-ray and DVD 6/30 exclusively from Amazon, with a wide release scheduled for August 11, 2015.

Happy July! As usual, this July is going to be filled with blockbusters, sequels, remakes, raunchy comedies, and superheroes, but there are some worthwhile smaller films as well.

Opening today, for the holiday weekend, we have two sequels.

Magic Mike XXL: The dancers go on the road — can they win the big competition?

Terminator Genisys: Somehow they are going to explain how the Arnold Schwarzenegger android is aging.

Minions: Where did those little yellow guys come from? Why do they love to work for evil geniuses? This prequel to the “Despicable Me” movies stars Sandra Bullock as Scarlett Overkill.

Self/Less: A rich old guy (Sir Ben Kingsley) who does not want to die takes on the body of a young, healthy guy (Ryan Reynolds).

Batkid Begins: A five year old cancer survivor told Make-a-Wish he wanted to be Batman, and the entire city of San Francisco made his wish come true. Julia Roberts will star in the feature film adaptation of this heartwarming documentary.

Trainwreck: Amy Schumer wrote and stars in this raunchy comedy about a young woman with commitment issues who falls for a doctor (Bill Hader). LeBron James co-stars as himself.

Ant-Man: Yes, he is a tiny superhero. But he is played by Paul Rudd, so I am on board.

Pixels: We are attacked by aliens — in the firm of old-school arcade games!

Paper Towns: Nat Wolff and John Green — two of my favorites. Green’s book is about a high school kid whose life is turned upside down when the girl he has loved from afar invites him on an adventure and then disappears.

Irrational Man: Woody Allen’s latest seems to be another movie about a middle-aged man (Joaquin Phoenix) whose life is saved by a beautiful young woman (Emma Stone). I hope not.

Vacation: Do we need a remake of the Chevy Chase classic? We’re going to find out!

Mission Impossible: Rogue Nation: Tom Cruise is back and the action looks sensational.

Stanford Prison Experiment: Psychology researchers assign students the roles of prisoners and guards. What could go wrong? Based on a true story.