Happy Independence Day!  Every year, I recommend the rousing musical about the Declaration of Independence. “1776” makes the Founding Fathers vivid, human, and interesting characters, and is so involving that you almost forget that you already know how it all turned out. William Daniels is the “obnoxious and disliked” John Adams, Ken Howard is Thomas Jefferson, who would rather be with his wife than work on the Declaration, and Howard da Silva is a wry and witty Benjamin Franklin. As they debate independence, we see the courage that went into the birth of the United States, and, in an especially sobering moment for us now, we see the tragedy as they compromise with the South to permit slavery in the brand-new country.  It is outstanding family entertainment.

Sonia Manzano has announced that she is leaving Sesame Street after 44 years.  She was 22 years old when she auditioned for the brand new series that would revolutionize children’s programming. She became Maria, one of the first Latina characters on national television. Her warmth and good humor in dealing with both human and puppet characters made her instantly relatable. Maria and her husband Luis run a fix-it shop, which gave the characters a lot of opportunities to interact, and to show that problems can be solved and that it is okay to ask for help.

Her memoir, Becoming Maria: Love and Chaos in the South Bronx

will be released next month.

We will miss her!

Two-time Oscar winner Olivia de Havilland turns 99 years old today. She was one of the biggest stars of the Golden Age of Hollywood, appearing memorably opposite Errol Flynn eight times, most memorably in “The Adventures of Robin Hood.”

She could appear beautiful and glamorous, but some of her best roles were when insisted on looking plain: “Gone With the Wind,” “The Heiress,” and “The Snake Pit.” She is best remembered for her dramatic roles, but she was also a gifted comic performer, as shown in “The Strawberry Blonde” with James Cagney.

Entertainment Weekly had a wonderful tribute to her last year.

At 98, Olivia de Havilland is the last great star of Hollywood’s golden age, a woman who began her career during the rise of Technicolor in 1935, formed one of the most indelible screen couples of all time with Errol Flynn, and went on to work with James Cagney, Rita Hayworth, Montgomery Clift, Bette Davis, Richard Burton, Clark Gable, and Vivien Leigh. With her deep brown doe eyes and apple-cheeked smile, the two-time Best Actress winner excelled at playing heroines whose demure bearing belied a feisty core. The most famous of these great ladies was Melanie Hamilton, the tenderhearted foil to Leigh’s scheming Scarlett O’Hara in 1939’s Gone With the Wind. Based on Margaret Mitchell’s best-seller, the beloved epic has sold more tickets in its lifetime than any other film. And 75 years ago it cleaned up at the Academy Awards, winning eight of its 13 nominations.

Having outlived all of her costars (as well as the movie’s mad-genius producer, David O. Selznick, and the three directors he hired to steer the massive ship), de Havilland has been GWTW’s principal spokesperson for almost five decades, the sole bearer of the Tara torch. It’s a privilege she calls “rather wonderful,” as her affection for the film is genuine and deep. She’s seen GWTW “about 30 times,” she says, and still enjoys watching it for the emotional jolt it brings as she reconnects with those costars—Gable, Leigh, Hattie McDaniel, and Leslie Howard—who have long since passed on.

“Luckily, it does not make me melancholy,” she says via email a few days after our meeting. (Though an expert raconteuse, she’s conscientious about facts—”I want to be a font of truth”—and will discuss the finer points of her career only in writing.) “Instead, when I see them vibrantly alive on screen, I experience a kind of reunion with them, a joyful one.”

Ms. de Havilland lives in Paris, now, so we will wish her a bon anniversaire, with many thanks. 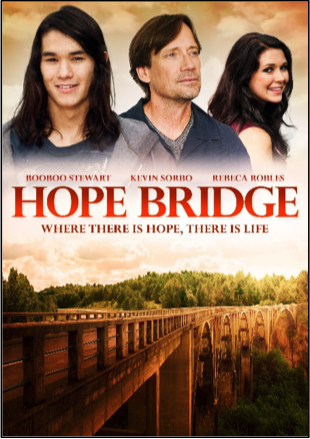 “Hope Bridge” is a new DVD from Pure Flix about the devastating impact of suicide. Christi and David Eaton produced the movie after having experienced suicide twice in their family. They knew the best way to reach out to others was through a film. It is the story of a teenager following his father’s suicide. He wants answers that may not exist. With some help from a counselor (Kevin Sorbo) and a girl facing her own struggles (Rebeca Robles) he begins to find a way to get the support he needs.

The Eatons have also developed resources and support for those struggling with thoughts of suicide, loves ones impacted by suicide, or those wanting to help reduce the number of suicides each year.
About Hope Bridge:

I have copies to give away. Send me an email at moviemom@moviemom.com with Hope in the subject line and tell me your favorite summer treat. Don’t forget your address! (U.S. addresses only). I’ll pick a winner at random on July 10, 2015. Good luck!

Coming next month on DVD, “No Ordinary Hero: The SuperDeafy Movie” is the story of a deaf actor (John Maucere) who plays a deaf superhero in a campy television series. But he wants to be a real hero. A beloved character and role model, SuperDeafy has a worldwide following. He has been turned into t-shirts, posters and dolls… and now a movie. This film marks the first time in cinematic history that a SAG commercial feature film is being executive produced exclusively by deaf executive producers and directed by a deaf director. Featuring a stellar cast that includes Best Actress Academy Award-winner Marlee Matlin, Shoshannah Stern, and Ryan Lane. Maucere has been featured as the sign language performer at Super Bowl 2013 and has been performing the Superdeafy character in the deaf community for the past 15 years.