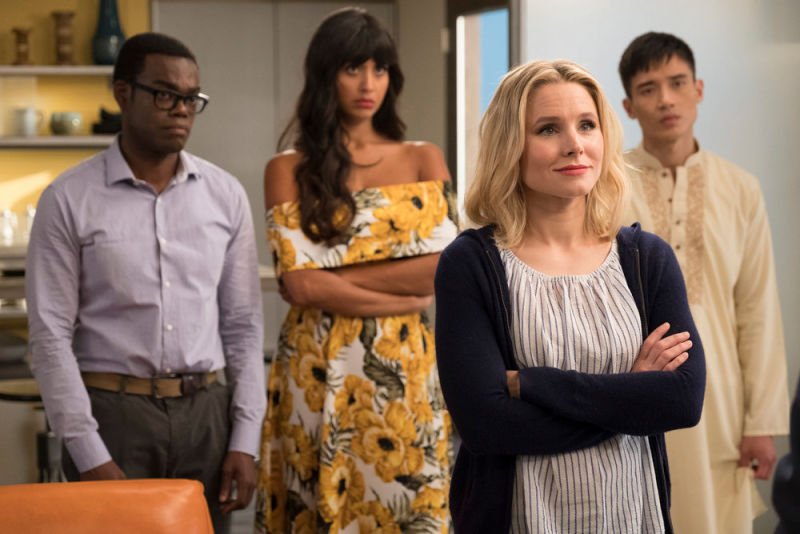 The Best Show on Network Television is The Good Place

My favorite network television series is “The Good Place,” which had one of the all-time great twists at the end of the first season and has just completed its even-better second season. Everyone in it is superb, from experienced actors Kristen Bell and Ted Danson to newcomers Jameela Jamil (in her first professional acting role), Manny Jacinto, William Jackson Harper (you can see him on “The Electric Company” and in the movie “Paterson”), and D’Arcy Carden.

While we wait impatiently for the third season (that last episode opened up some very intriguing possibilities), here are some thoughtful takes on the show.

In the New York Times, James Poniewozik writes about the series’ refreshing optimism, contrary to the trend of the past few years toward antiheroes.

He says it “avoided falling into easy moralizing by committing to the idea that becoming good is hard work,” including “a running crash course in remedial ethics, with the most madcap name-dropping of the greats of moral thought since Monty Python’s ‘Bruces’ Philosophers Song.’…orality is not something you have; it’s something you do. It’s a muscle that requires exercise. The show shares with dramas like “Breaking Bad” the belief that being good is hard. But it doesn’t believe that being good is futile.”

At Vulture, Josef Adalian writes about the connection between “The Good Place” and “Lost.”

“The Good Place” showrunner Michael Schur says he asked to be set up on a “playdate” with “Lost’s” Damon Lindelof.

The thing that Damon did for me, which I was very grateful for, the greatest thing anyone any writer can do for another writer, which is to say, “Here are, like, 12 pitfalls you’re about to fall into,” which is exactly what I needed. I needed a person who is conversant in the language of science fiction or genre writing, which I am not, to say to me, “Here are some things that are gonna happen that are dangerous. Here’s what’s gonna happen, here’s how to avoid it.” So that was a huge part of how I operated going forward.

He also reveals some details inspired by or in tribute to Lindelof.

My friend and fellow critic Jen Chaney, a big fan of both shows, really drilled down on the connections for Vulture.

There are so many things that make ‘The Good Place’ a rich and delightful experience: the performances delivered by its talented cast, its constant use of inspired puns, the fact that it has created an entire new genre of comedy known as Jacksonville Jaguars Humor. But from the very beginning, ever since creator Mike Schur said that he was partly inspired by ‘Lost’ when he set out to make this series, it has been fascinating to watch the ways in which ‘The Good Place’ uses that ABC series as a touchstone. Some of the parallels between the two shows are obvious. When “The Good Place” began, it was about a group of people who landed in an unknown place and had to learn the rules that governed it while also making their own rules in order to survive, if “survive” is a word that can be used within the context of the afterlife. That’s exactly what happened to the survivors who crashed on the island in “Lost.”

“The Good Place” may just inspire fans to try to be a bit better themselves, and not just to avoid The Bad Place. It might even inspire a few to try some moral philosophy, though if they have been watching the show they have already learned that too much thinking about ethical dilemmas can also be a problem. I guess for the answer to that one, we’ll have to wait for Season Three. 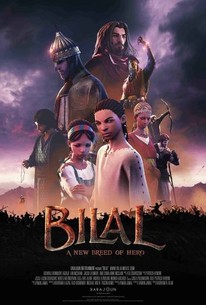 Bilal: A New Breed of Hero

For as long as there have been humans, there have been efforts to divide into groups ranked on any available distinctions: race, religion, property. Stories about those who were willing to fight for equality and justice go back almost as far, and this film begins by telling us it is “one of the oldest accounts of humanity’s struggle for equality and freedom.”

“Bilal: A New Breed of Hero” is the ambitious first animated feature directed by Ayman Jamal and Khurram H. Alavi, from Dubai’s new animation studio. The English language cast includes Adewale Akinnuoye-Agbaje, China Anne McClain, Jacob Latimore and Ian McShane. Bilal, born in 540 AD, was a slave who became one of the most trusted companions of Muhammad, and the first muezzin, using his beautiful voice to call worshippers to prayer.

As a young boy, Bilal dreams of being a warrior. “A sword and a horse cannot make you a great man,” his mother gently advises him. What she wants is for him to “live without chains.” The chains she means are spiritual. She does not want him or his sister to be “chained to anger, vengeance, superstition, or fear.”

But soon he and his sister have physical chains, as their community is attacked, their mother is killed, and they are forced into slavery by the idol-worshippers led by Umayya (McShane), who is more interested in selling idols than being faithful to them. The idol worship is based on superstition and fear, not morality. The lord of merchants who befriends Bilal echoes what his mother told him. “Your master is a slave himself.” He is a slave to his greed, admitting, “I worship whatever empowers me.”

He is also a slave to his fear of Bilal and his knowledge that a society built on injustice cannot last. He beats, starves, and tortures Bilal but the lord of merchants buys his freedom, and makes it possible for him to lead a rebellion.

It is a stirring story, respectfully told. The action scenes are intense and well-staged, but the non-action scenes are ponderous and static. Much of the dialogue is the standard sword-and-sandal faux classical (“Great men are those who have the will to choose their own destiny”), but every so often there’s a line like, “Show me what you got, rookie,” that seems like it came from another movie. The Dubai animation rookies are showing us what they’ve got, and it is an auspicious beginning.

Parents should know that this film includes extended peril and violence, torture of a child and an adult, sad death of parent, and issues of bigotry, tyranny, and oppression.

Family discussion: What would Bilal’s mother see as today’s chains of slavery? Why did the lord of merchants befriend Bilal? What do you want to be when you grow up and why?

If you like this, try: “The Prince of Egypt,” “Spartacus,” and “The Ten Commandments” 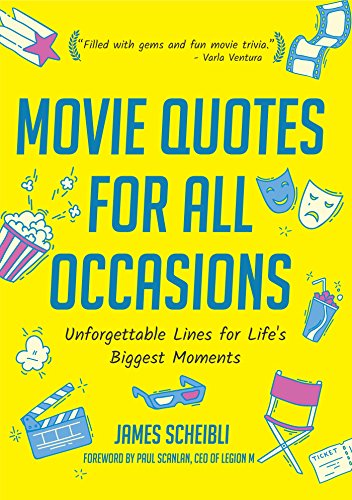 Book: Movie Quotes for All Occasions

“Round up the usual suspects.” “Frankly my dear, I don’t give a damn.” “Leave the gun. Take the cannoli.” “There’s no place like home.” The movies are so much a part of our lives, so much a part of us, that we can’t help quoting them. James Scheibli’s new book, Movie Quotes for All Occasions: Unforgettable Lines for Life’s Biggest Moments, is a treasure trove of gems from the movies, and it is already an Amazon best-seller.

What makes this book special is the way it matches the quotes, to the occasions where they are most apt — graduations, weddings, office pep talks, sports pep talks, and even sadness and loss. And Scheibli has some great selections, both the familiar to the unexpected, the classics (“Rocky,” of course, “Citizen Kane,” ) to the far-from-classics (“Hellboy,” “Never Back Down,” “Two for the Money,” “Vanilla Sky”). It also includes recommended films, behind-the-scenes details, and some unexpected trivia.” Every page is a delight.