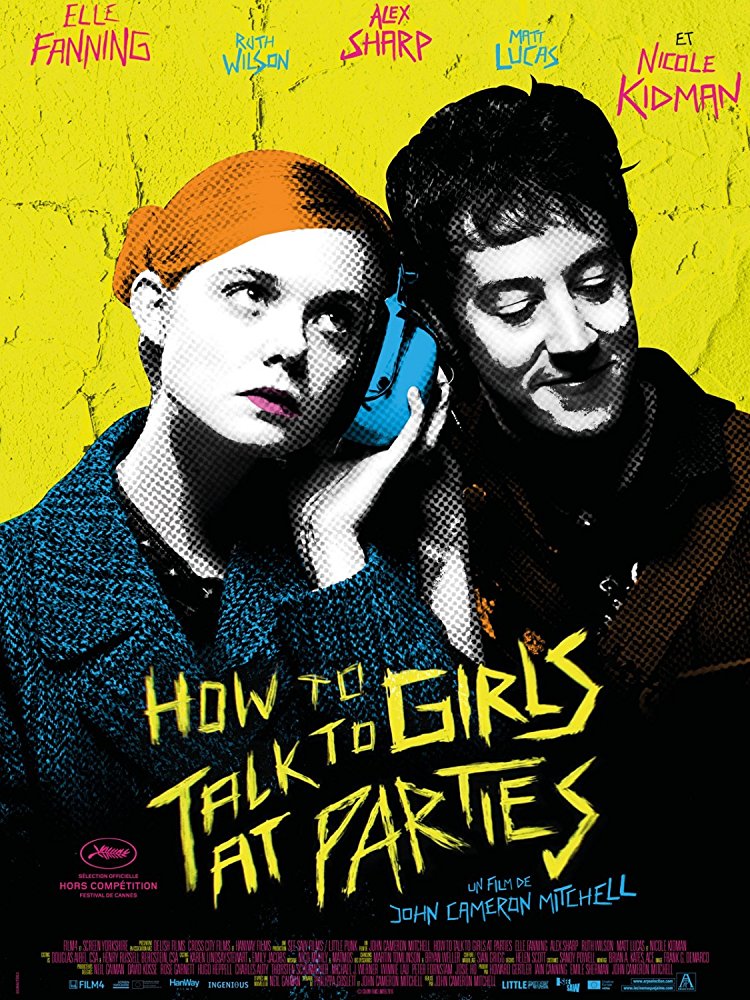 How to Talk to Girls at Parties

Three suburban British schoolboys in the 1990’s are big fans of punk because it seems thrilling to challenge authority and pretty much everything.  But they are not very knowledgeable about anything outside of their own experience, and so when they accidentally wander into a strange party that happens to be a bunch of aliens, they just assume that they must be American girls. In How to Talk to Girls at Parties, Americans, girls, and aliens — they’re all equally unknown, and so, for these boys anyway, easy to confuse.

Neil Gaiman’s sly short story has been lovingly adapted by John Cameron Mitchell (“Hedwig and the Angry Inch,” “Rabbit Hole”), with a breakout performance by Tony-winner Alex Sharp as Enn (short for Henry), a sweet-natured kid who, like his two best friends, loves punk and really, really, really wants to learn how to talk to girls.  Somehow, though, at parties he’s the one who ends up in the kitchen talking to someone’s mum. One night, after a punk concert, they go in search of a party they heard about but end up knocking on the wrong door.  Inside, each room has a different gathering or ritual or happening going on, all exceptionally attractive people (though one has made a mistake in manifesting and has a weird forked finger).

We know what it will take Enn the whole movie to figure out.  These are not American girls. They are aliens, on some sort of galactic tour.  And one of them, named Zan (Elle Fanning, looking far too perfect to be a human) is an alien version of punk, open-minded, curious, and inclined to break the rules. She and Enn go out exploring the world together, and they explore each other a bit, too.

The fun of all fish out of water films is seeing our world, in this case our former world, through fresh eyes. We may laugh as Zan discovers what happens when a human body processes food or speaks whatever comes into her head without understanding social norms like privacy or embarrassment. But we also appreciate her wonder at the gritty, harsh British suburb and the very things that punk is rebelling against. Her encounter with a punk queen (Nicole Kidman with gusto and evident enjoyment) is surprisingly endearing. And when Zan’s alien leaders want to interfere, well, let’s just say that it can be a real advantage to have punks on your side. A magical musical number brings everything together in quite literal terms.

Sharp is the real deal. I was struck by his performance on Broadway and really happy to see him in this film. He is able to convey innocence that comes from being true-hearted, not from a slapstick kind of awkwardness. Fanning continues to be one of the most appealing young performers in films today, always thoughtful and heartfelt. Their Romeo and Juliet romance is sweet and touching, with the adventures of Enn’s friends providing some counterpoint. Punk in this film is not angry so much as revolutionary, fueled by ideas and optimism. That may seem like an alien idea today, but Mitchell makes it seem right on time.

Family discussion: What does punk mean to you? What is punk today? Why didn’t Zan want to follow the rules?

If you like this, try: “Stardust” and “Coraline,” also based on books by Neil Gaiman

If I ever decide to pursue a PhD, I think I will go for a combined film/economics degree and study the correlation between the quality of a film and the star also being the producer. There will be plenty of data.

Shailene Woodley produces and stars in “Adrift,” based on the true story of a young couple sailing across the Pacific Ocean in the early 1980’s, who were caught in a deadly hurricane. There is obviously a lot of appeal for an actress in a story of the struggle to survive with the opportunity to show courage, resilience, and determination. But the back-and-forth flashbacks weaken the intensity of that struggle and a weak script with a Gothika Rule-worthy twist ending make even a story of survival more disappointing than inspiring.

Tami (Woodley) is a free spirit as we see when the immigration official in Tahiti asks her what her profession is and she replies, “Whatever job pays me enough to get me to the next place.” She has been traveling full-time since she graduated from high school five years earlier, most recently as chef on a schooner. She meets Richard (Sam Claflin), a British Naval Academy drop-out who worked in a boatyard so that he could build his own sailboat and has been on the water pretty much full-time ever since. Though he tells her that being at sea alone is mostly being “sunburnt, sleep-deprived, seasick, or all three at once. And after a few days, there’s the hallucinations.” But there is something both of them find irresistible in sailing into the horizon, and both have an unquenchable desire to see what the world has to offer. In one of the movie’s best scenes, she says a sunset at sea is red (as in “Red sky at night, sailor’s delight”), and he makes her see all the different shades and colors within the red. While she teases him about it later, she loves seeing the world through his eyes. And he loves her spirit of adventure.

When a wealthy friend offers Richard $10,000 and two first-class plane tickets to sail his yacht to San Diego, it seems like a perfect way for them to begin their life of adventure. But we know from the movie’s first shot that they are sailing into terrible trouble. We first see Tami submerged, and then we see her come to, disoriented, in the wrecked and waterlogged hull of the yacht, with Richard gone. Later we will see their tiny ship buffeted about by waves (the special effects are fine but nothing we didn’t see in “The Perfect Storm”) interspersed with scenes of their early romance and scenes of the 41 days adrift, with no way to get help or let anyone know where they were.

I don’t want to spoil the movie’s twist here, but per the Gothika Rule will be happy to share it to anyone who writes to me at moviemom@moviemom.com. I’ll just saw that while I am sure it was a deeply spiritual and sustaining experience for Tami, it comes across poorly on screen, leaving the audience, yes, adrift.

Parents should know that this film includes intense mortal peril with severe and graphic injuries, some strong language, sexual references, nudity, brief drug use, alcohol, reference to suicide and teen pregnancy, and a sad death.

Family discussion: How many ways can you think of to describe red? Why was the frangipani so meaningful? Why did Tami say she wouldn’t trade the experience for anything? What problem-solving skills helped her the most?

If you like this, try: “Touching the Void” and “The Life of Pi”

Related Tags:
“Gothika Rule” Action/Adventure Based on a book Based on a true story DVD/Blu-Ray movie review

I admit it. I feel shaken and stirred. Washington DC’s Madame Tussaud’s now has all six James Bonds, elegantly attired in tuxes designed by Oscar-winner Lindy Hemming, the wardrobe, poses, guns, and roguish charm all re-created, standing in front of an iconic swirl from the movies’ opening credits. They are so realistic you can almost hear each of them say, “Bond. James Bond.”

The elegant spy figures from the movies based on Ian Fleming’s agent with a license to kill took a team of twenty artists four months to complete at a cost of almost $200,000 each. Hundreds of layers of oil paint were used to build up accurate skin tones and each hair on their heads was inserted individually by hand, taking six weeks. I spoke to General Manager of Madame Tussauds Washington DC, Therese Alvich, who told me each figure was delivered in a separate crate from London. Although packed with as much care as an Old Master painting, a few minor touch-ups were needed before installing them amid some of the other celebrity figures, including Miley Cyrus, Brad Pitt, and Jennifer Lopez. The six Bonds will be on display through the summer, so Madame Tussauds has been able to coordinate with Washington DC’s Spy Museum, just a few blocks away, where a special exhibit of Bond villains is a popular attraction. It’s good to know that the various cat-loving Blofelds, lethal sidekicks, and assorted megalomaniacs at the Spy Museum will be under the watchful eye of six 007s.

I had a blast as always at the annual meeting of the National Cartoonists Society, which includes comic strip artists, gag/one-panel cartoonists, animators, web comic artists, caricaturists, political cartoonists, and greeting card artists.  The top award, the Reuben (named for Rube Goldberg) went to Glen Keane, animator of Disney classics like “Tangled, ” “The Little Mermaid,” and “Rapunzel.”  His dad created one of the all-time comic classics, “Family Circus,” now drawn by his brother, Jeff (yes, that’s Jeffy from the strip.)

I wrote about it for Medium.

“Show Dogs” is a movie about a cop and a talking dog who go undercover at a dog show.  It has a nice message about not jumping to conclusions about others (whether dogs or people) based on prejudice or superficial factors.  But many parents complained about another message as well, unintentional, but disturbing, and the movie is being re-cut and re-issued.

You can get a sense of the problem in the trailer.

I’m sure it was supposed to be funny that the cop dog voiced by Chris “Ludacris” Bridges has to submit to a physical exam when he is undercover as a show dog. But the filmmakers showed very poor judgement at best in making it into an extended “comic” bit, where he is repeatedly told to accept examination of his private parts and “go to his zen place.”  The film’s production company has agreed to remove those scenes and the movie will be returned to theaters without them.

The National Center on Sexual Exploitation said the movie “sends a troubling message that grooms children for sexual abuse…It contains multiple scenes where a dog character must have its private parts inspected, in the course of which the dog is uncomfortable and wants to stop but is told to go to a ‘zen place.’ The dog is rewarded with advancing to the final round of the dog show after passing this barrier. Disturbingly, these are similar tactics child abusers use when grooming children—telling them to pretend they are somewhere else, and that they will get a reward for withstanding their discomfort. Children’s movies must be held to a higher standard, and must teach children bodily autonomy, the ability to say ‘no’ and safety, not confusing messages endorsing unwanted genital touching.”

Clearly, this was the right decision, and we hope it will make studios more sensitive to these issues in the future.