New on Netflix: Five Came Back

Five Came Back: A Story of Hollywood and the Second World War, is a book by Mark Harris about five of the greatest directors of all time who joined the war effort to document it and to promote morale at home. It is also about how the experienced changed them and inspired them to come home after the war and create richer, more complex, and more powerful films than they had before. George Stevens, Frank Capra, William Wyler, John Ford, and John Huston created films during and after the war that helped shape our views on the war but also on America and what kind of world we would create when the war was over.

The book is now a series on Netflix, narrated by Meryl Streep and featuring commentary from today’s top directors, including Guillermo del Toro, Francis Ford Coppola, and Steven Spielberg, as well as clips from films we know by heart like “It’s a Wonderful Life” and “The Best Years of Our Lives,” and film that has been rarely seen since the war, including stunning documentary footage. 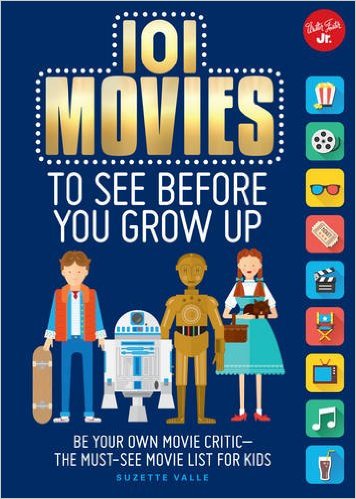 My friend Suzette Valle has a great new book for families, 101 Movies to See Before You Grow Up. It’s a colorfully illustrated list of classics for the whole family, from “The Goonies” to “Whale Rider,” “Mary Poppins,” “The Red Balloon,” “It’s a Wonderful Life,” and “My Neighbor Totoro.” It is a great collection of established classics and neglected gems, some parents will remember from their own childhoods and some grandparents will remember from theirs. Each page is colorfully illustrated, with space for children to rate each movie and jot down their comments. This encourages engagement, discussion and critical thinking. Highly recommended for all families.

The only new show to make it to my DVR series list is “Crazy Ex-Girlfriend,” co-created by its sensationally talented star, Rachel Bloom. Each episode is a full-on original musical that takes place mostly inside the head of its slightly demented heroine, Rebecca, a Harvard and Yale-educated lawyer who walked away from her type-A career in a New York City law firm to move to West Covina, California, where her boyfriend from summer camp lives.

It has a tremendous cast of singers and dancers, most with Broadway experience, including Donna Lynne Champlin, who plays Rebecca’s new friend, Paula, Santino Fontana (from the Broadway “Cinderella”) as a bartender who for some reason he cannot understand is drawn to Rebecca, and Vincent Rodriguez III as Josh, the object of Rebecca’s obsessional affection.

And here’s an Astaire-and-Rogers themed song with Fontana.

The songs are by Fountains of Wayne’s Adam Schlesinger, who created the pitch perfect title number for “That Thing You Do” and the songs for the Drew Barrymore/Hugh Grant film “Words and Music.” They are funny and smart and earwormy in the nicest possible way. It’s on the CW Monday nights at 8/7 central and you can catch up on the previous episodes on Hulu.

Related Tags:
After the kids go to bed Comedy Television

A Tribute to Unlikeable Women in the Movies

I really enjoyed the recent series on “Unlikeable Women” from the folks at Bitch Flicks. I remember a panel of women filmmakers at Comic-Con all agreeing that the code word for making female characters meek and pliable (and giving all the tough dialogue and action to the male characters) was “relatable.” So cheers to the unabashedly, sometimes proudly, “unlikeable” women of the movies, including those saluted in this series.

Of course there are many other great choices. Here are some of my other favorites.

In honor of this week’s release of “Focus,” here are some of my favorite movies about con games and grifters. Remember that “con” comes from “confidence.” A con man (or woman) makes you believe in them and have confidence in their schemes. And cons make great movies. If you haven’t seen these, crank up your Neflix queue.

Michael Caine and Steve Martin play con men outdoing each other in this remake of “Bedtime Story” with David Niven and Marlon Brando.

David Mamet is fascinated by con men, and both this film and The Spanish Prisoner

are about characters caught up in elaborate cons.

The FBI did actually collaborate with real-life con men in a sting operation that ended up taking down Members of Congress.  David O. Russell’s film stars Bradley Cooper, Christian Bale, Amy Adams, Jeremy Renner, and an unforgettable Jennifer Lawrence as one of the few people in the story who isn’t conning anyone.

6. Confidence Dustin Hoffman gives one of his best performances as a crime boss whose bag man gets conned by Edward Burns.

Professor Harold Hill sells band equipment and then skips town before it arrives, until he meets a pretty piano teacher named Marian in this most glorious of musical comedy romances.

Burt Lancaster and Katharine Hepburn star in the story of a farm community during a drought and the man who says he can make it rain.

A con man struggling with OCD meets his daughter for the first time.

Orson Welles is something of a con man himself in this documentary about two of the 20th century’s most notorious cheaters.

Related Tags:
After the kids go to bed Crime For Your Netflix Queue Lists Neglected gem